23 years of experience in Medical Malpractice and Personal Injury law 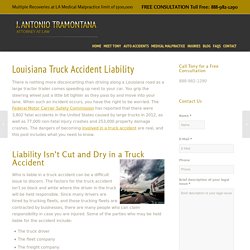 You grip the steering wheel just a little bit tighter as they pass by and move into your lane. When such an incident occurs, you have the right to be worried. The Federal Motor Carrier Safety Commission has reported that there were 3,802 fatal accidents in the United States caused by large trucks in 2012, as well as 77,000 non-fatal injury crashes and 253,000 property damage crashes. The dangers of becoming involved in a truck accident are real, and this post includes what you need to know. Liability Isn’t Cut and Dry in a Truck Accident Who is liable in a truck accident can be a difficult issue to discern. Louisiana 2nd Deadliest State for Bicyclists - Monroe, LA Attorney. 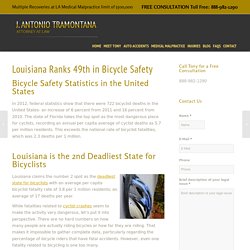 The state of Florida takes the top spot as the most dangerous place for cyclists, recording an annual per capita average of cyclist deaths as 5.7 per million residents. This exceeds the national rate of bicyclist fatalities, which was 2.3 deaths per 1 million. Louisiana is the 2nd Deadliest State for Bicyclists Louisiana claims the number 2 spot as the deadliest state for bicyclists with an average per capita bicyclist fatality rate of 3.8 per 1 million residents; an average of 17 deaths per year.

While fatalities related to cyclist crashes seem to make the activity very dangerous, let’s put it into perspective. While the statistics paint a grim picture about bike riding, it is still a fun activity with many health benefits. Safety Recommendations for Louisiana Bicyclists Wear a helmet. Louisiana Open Container Law - Monroe, LA - Attorney Tramontana. Open Container Laws in the United States Open container laws prohibit the presence of any type of unsealed container that contains or contained an alcoholic beverage. 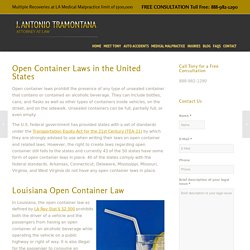 They can include bottles, cans, and flasks as well as other types of containers inside vehicles, on the street, and on the sidewalk. Unsealed containers can be full, partially full, or even empty. The U.S. federal government has provided states with a set of standards under the Transportation Equity Act for the 21st Century (TEA-21) by which they are strongly advised to use when writing their laws on open container and related laws.

However, the right to create laws regarding open container still falls to the states and currently 43 of the 50 states have some form of open container laws in place. 40 of the states comply with the federal standards. Louisiana Drivers rank among worst in US - J Antonio Tramontana - Personal Injury Attorney. Many states across America have seen a reduction in traffic accidents as well as injuries and fatalities when they have passed stricter traffic laws along with stiffer penalties, but what happens when drivers seem to disregard traffic laws all together? 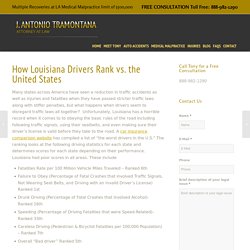 Unfortunately, Louisiana has a horrible record when it comes to to obeying the basic rules of the road including following traffic signals, using their seatbelts, and even making sure their driver’s license is valid before they take to the road. A car insurance comparison website has compiled a list of “the worst drivers in the U.S.” The ranking looks at the following driving statistics for each state and determines scores for each state depending on their performance.

Louisiana had poor scores in all areas. These include All of these rankings were made by looking at fatal accidents. Do Seat Belts Matter in Louisiana? According to the Center for Disease Control wearing a seatbelt can reduce a person’s risk of injury by half. At J. Can your Facebook posts be used against you in a lawsuit? - J Antonio Tramontana - Personal Injury Attorney.

Can your Facebook posts be used against you in a civil lawsuit? 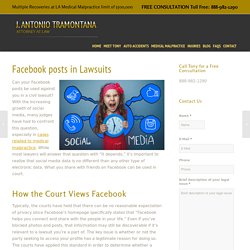 With the increasing growth of social media, many judges have had to confront this question, especially in cases related to medical malpractice. While most lawyers will answer that question with “It depends,” it’s important to realize that social media data is no different than any other type of electronic data. What you share with friends on Facebook can be used in court. How the Court Views Facebook Typically, the courts have held that there can be no reasonable expectation of privacy since Facebook’s homepage specifically states that “Facebook helps you connect and share with the people in your life.” Cases Where Facebook Posts were Ruled Relevant and Non-Relevant for Discovery If you’ve made Facebook posts about all the fun you had on your latest skiing expedition after alleging serious and permanent injuries from an auto accident, that information is relevant to the lawsuit from the car accident and will be discoverable.