We are a global trading organization providing integrated chemical procurement services with certainty and trust, which makes Tradeasia unique. 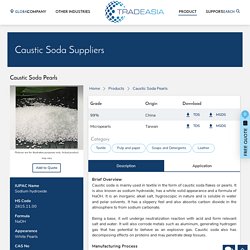 It is also known as sodium hydroxide, has a white solid appearance and a formula of NaOH. It is an inorganic alkali salt, hygroscopic in nature and is soluble in water and polar solvents. It has a slippery feel and also absorbs carbon dioxide in the atmosphere to from sodium carbonate. Being a base, it will undergo neutralization reaction with acid and form relevant salt and water. Manufacturing Process Metathesis Reaction By reacting sodium carbonate with calcium hydroxide, the reaction yields sodium hydroxide and calcium carbonate. 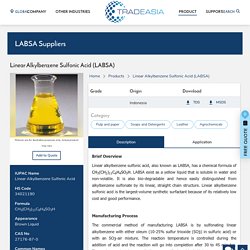 LABSA exist as a yellow liquid that is soluble in water and non-volatile. It is also bio-degradable and hence easily distinguished from alkylbenzene sulfonate by its linear, straight chain structure. Linear alkylbenzene sulfonic acid is the largest-volume synthetic surfactant because of its relatively low cost and good performance. Manufacturing Process The commercial method of manufacturing LABSA is by sulfonating linear alkylbenzene with either oleum (10-25% sulfur trioxide (SO3) in sulfuric acid) or with an SO3-air mixture. Activated Carbon Suppliers, Exporter. Description Brief Overview Activated carbon, also known as activated charcoal or activated coal, is a form of carbon with small and low-volume pores which increases the surface area available to facilitate adsorption or chemical reactions. 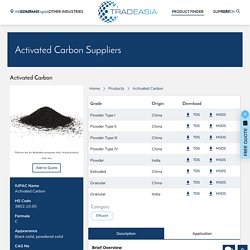 The increased surface area of activated carbon makes the material suitable for adsorption, a phenomenon where particles such as atoms, ions or molecules of gas, liquid or solid are adhered to a surface. These particles are held within the carbon’s internal pore structure by electrostatic attraction or chemisorption. This adsorption ability allows activated carbon to play an important role in many industries as it can help to reduce dangerous matter in chemical process, activate chemical reactions, and also act as a carrier for biomass and chemicals. 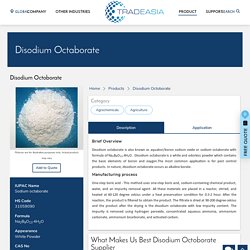 Disodium octaborate is a white and odorless powder which contains the basic elements of boron and oxygen.The most common application is for pest control products. In nature, disodium octaborate occurs as alkaline borate. Hydrazine Hydrate Suppliers, CAS No. 10217-52-4. Description Brief overview Hydrazine hydrate is represented as N2H4. It is a colourless, flammable liquid with an ammonia-like odour. Pure anhydrous hydrazine was first prepared by the Dutch chemist Lobry de Bruyn in 1895. 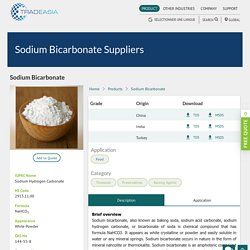 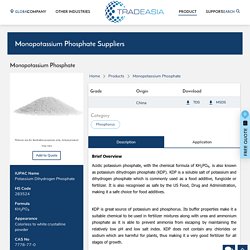 KDP is a soluble salt of potassium and dihydrogen phosphate which is commonly used as a food additive, fungicide or fertilizer. It is also recognised as safe by the US Food, Drug and Administration, making it a safe choice for food additives. KDP is great source of potassium and phosphorus. KDP can be observed to be colourless with a crystalline structure and is easily soluble in water with a melting point of 252.6ºC. Manufacturing Methods Acidic potassium monophosphates are produced using phosphoric acid and potassium hydroxide. Application Agriculture Industry KDP is used as a high quality fertilizer material in agriculture crops especially when nitrogen fertilizer is limited. 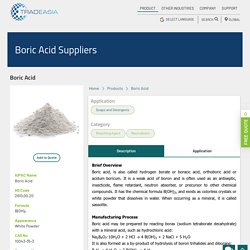 It is a weak acid of boron and is often used as an antiseptic, insecticide, flame retardant, neutron absorber, or precursor to other chemical compounds. It has the chemical formula B(OH)3, and exists as colorless crystals or white powder that dissolves in water. When occurring as a mineral, it is called sassolite. Manufacturing Process Boric acid may be prepared by reacting borax (sodium tetraborate decahydrate) with a mineral acid, such as hydrochloric acid: Na2B4O7·10H2O + 2 HCl → 4 B(OH)3 + 2 NaCl + 5 H2OIt is also formed as a by-product of hydrolysis of boron trihalides and diborane: B2H6 + 6 H2O → 2 B(OH)3 + 6 H2BX3 + 3 H2O → B(OH)3 + 3 HX (X = Cl, Br, I) Application. Hydrogen Peroxide Suppliers. 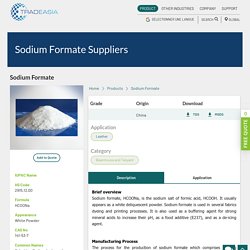 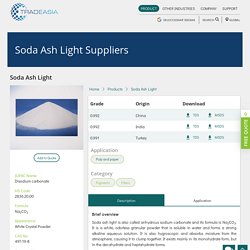 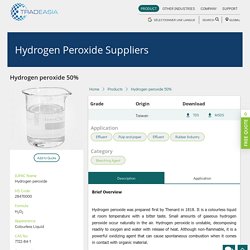 Monosodium Glutamate Suppliers. Potassium Carbonate Suppliers. Citric Acid Suppliers, Exporter. Sulphur Suppliers, Exporter. Tradeasia International. Description Brief Overview Starch is obtained naturally through extraction from the grain or root of cassava, a root vegetable. It is often commercially sold in the form of a dry powder and its grade varies based on the type of application it is being used for. However, often it is used in the food industry due to the lack of certain properties that are needed in other industries. Manufacturing Processes Production of tapioca starch can be separated into 3 different stages, namely preparation and extraction, purification and water removal.

Application Adhesive and Glue Industry Tapioca Starch is popular in the adhesive industry due to its appreciable binding capacity due to its high viscosity sticky properties when mixed with water or certain chemicals. Food Industry It is used to reduce manufacturing costs because of its efficiency as a thickener. Textile Industry. Tradeasia International. Sodium Chlorate suppliers. Hydrochloric Acid Suppliers, HCL. Description Brief Overview Hydrochloric acid is a clear, colorless to slightly yellow, highly pungent solution of hydrogen chloride (HCl) in water. It is a highly corrosive acid with many industrial uses. It is a monoprotic acid and is least likely to undergo an interfering oxidation-reduction reaction compared to other industrial acids.

It is one of the least hazardous strong acids to handle despite its acidity as it consists the non-reactive and non-toxic chloride ion. Manufacturing Process The simplest method for producing hydrogen chloride is direct synthesis from the elements, hydrogen (H) and chlorine (Cl), which yields a very pure product. Application. Calcium Carbonate Suppliers. Sodium Laureth Sulphate Supplier. Description Sodium laureth sulfate (SLES), an accepted contraction of sodium lauryl ether sulfate (SLES), is an anionic detergent and surfactant found in many personal care products (soaps, shampoos, toothpaste etc.).

Tradeasia International. Tradeasia International. Description Brief OverviewMaize starch, also commonly known as corn starch, has the chemical formula (C6H10O5)n. It is a fundamental ingredient in most packaged food and industrial products. Maize starch in natural, modified, pre-geletanized and dextrinized forms provides viscosity, texture and other desired properties to all types of food & paper, products from canned chilled frozen to microwaveable goods, dry mixes and extruded snacks. Starch serves as the starting material for manufacturing of starch derivatives and starch are often obtained from maize. Practically every industry in existence uses starch or its derivatives in one form or another. Manufacturing ProcessMaize starch is extracted from the white heart of the corn kernel and has a distinctive appearance and feed. Application Adhesives IndustryThe major use for starch-based adhesives is in so-called converting processes applied to paper and paperboard.