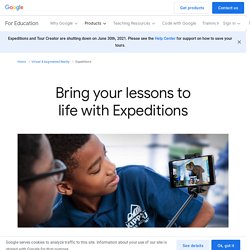 For the past 5 years, we've been proud to enable immersive VR and AR learning experiences for millions of students around the world with Google Expeditions and Tour Creator. As schools around the world reimagine education from the ground up for a hybrid world, we've also been thinking deeply about how to adjust our tools to meet the moment and simultaneously build for the future. We've heard and recognize that immersive experiences with VR headsets are not always accessible to all learners and even more so this year, as the transition to hybrid learning has presented challenges for schools to effectively use Expeditions. To make Expeditions VR tours available to everyone, we're migrating the majority of them to Google Arts & Culture's free site and application.

For additional information, please see the Expeditions Help Center. The Hidden Worlds of the National Parks.