Come See the Award Winning Toyota of Puyallup Service Department! Keeping your Toyota well maintained with regular visits to the service department will help keep you on the road longer. 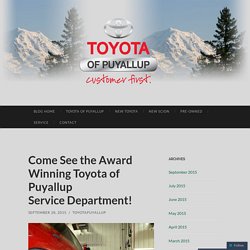 Toyota of Puyallup offers a variety of comprehensive services by qualified service technicians including tire replacement, repair, and balancing. Great Amenities Service SpecialsOur team wants to help you get the best deal, which is why we offer such great specials. Right now you can save 10% off a major mileage service and 50% off your next 5,000 service after that!

Fall Car Maintenance Checklist. Summer is coming to an end, and the leaves are beginning to fall. 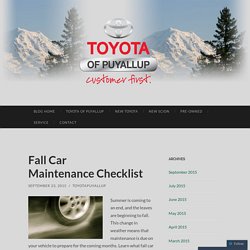 This change in weather means that maintenance is due on your vehicle to prepare for the coming months. Learn what fall car maintenance needs to be done in order for your vehicle to function safely and optimally. 1. Install New Wiper Blades Fall is the best time to replace your wiper blades, as it is arguably the season that experiences the most variable storm-like weather. Puyallup Used Cars, Pre Owned Vehicles Tacoma, WA.

Shop all new Toyota vehicles at Toyota of Puyallup dealer, Tacoma ... Tips for Car Shopping in the 21st Century. Buying cars today is very different from the way it was 50 years ago. 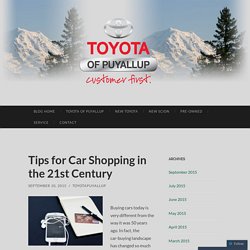 In fact, the car-buying landscape has changed so much that even a decade ago we went about buying cars differently. Gone are the days of going to a dealership cold, not knowing yet which model you’re going to purchase. The main reason for this difference: the internet. Toyota One Owner Vehicles - Puyallup Toyota serving Seattle. Schedule Puyallup auto service car repair maintenance. Certified inventory at Toyota of Puyallup serving Tacoma WA. How to Make Your Car Last Longer. Just because we don’t all know what we’re doing doesn’t mean we can’t learn a few tricks that help stack on the miles. 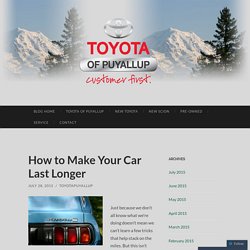 But this isn’t just about mileage—it’s also about saving some serious change. The secrets to a long-lasting car are actually pretty simple. Like any relationship, it’s all about showing some tender love and care. Service schedule Your car’s owner manual is its bible. Taking your car in according to the maintenance schedule keeps it in tip-top shape.

Fluids and tire pressure Everyone should have a basic understanding of their car. Checking the tire pressure is not only simple, but crucial. Odd noises If you listen to music while you drive, every so often it’s wise to turn it off and just listen to your engine. Drive gently Driving to and from work, we shouldn’t be driving like rally racers. Of course, occasional the pedal-to-the-metal style driving won’t destroy your engine. Clean and Cover. Puyallup Used Cars, Pre Owned Vehicles Tacoma, WA. Why Buying a Used Toyota is Better. The used car world can be a dangerous one. 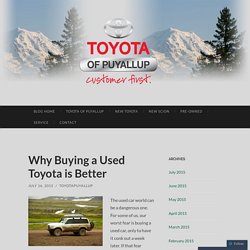 Camry and Sienna Named Most American-Made Cars. They may be headquartered in Japan, but that doesn’t stop Toyota from topping American charts. 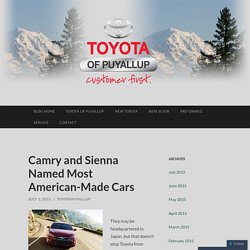 For the first time in three years, the Camry has once again been ranked as number one in the Cars.com American-Made index, with the Sienna following close behind in second. How exactly are the cars on the American-Made index chosen? Cars.com says, “American-Made Index rates vehicles built and bought in the United States. Factors include the percentage of parts considered “domestic” under federal regulations, whether the car is assembled in the U.S. and U.S. sales. Models with domestic-parts content ratings below 75 percent are disqualified, as well as models built exclusively outside the U.S. or models soon to be discontinued without a U.S. As it turns out, getting onto the list isn’t easy. Guess what Toyota car is America’s bestselling and most popular car in the last two decades? Tough question, right? 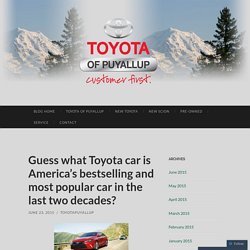 With Toyota’s reputation for high quality and a collection of durable cars, it could be any one of them. But according to 24/7 Wall St, the car that dominates the U.S. market is clear: the Camry. New Toyota Inventory at Toyota Puyallup. Puyallup Toyota Dealer serving Tacoma, Seattle, Renton, Auburn, WA. The “Longest Driven Journey” Think you have a good road trip story? 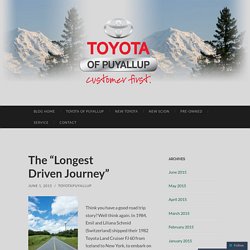 Well think again. In 1984, Emil and Liliana Schmid (Switzerland) shipped their 1982 Toyota Land Cruiser FJ 60 from Iceland to New York, to embark on a drive that the Guinness World Record calls the “Longest Driven Journey”. Starting in North America, the couple has traveled across 180 countries, and has accumulated well over 450,000 miles and is still going. Tacoma Inventory in stock Puyallup dealer serving Renton. Refine Search >> Trim Color Showing Vehicles Per Page. 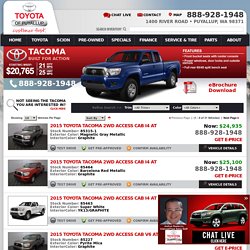 Toyota of Puyallup. Many considerations arise when searching for the best SUV. 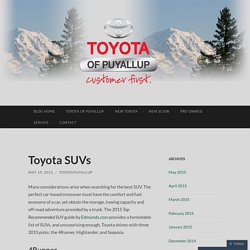 The perfect car-based crossover must have the comfort and fuel economy of a car, yet obtain the storage, towing capacity and off-road adventure provided by a truck. The 2015 Top Recommended SUV guide by Edmunds.com provides a formidable list of SUVs, and unsurprising enough, Toyota shines with three 2015 picks: the 4Runner, Highlander, and Sequoia. 4Runner So why are SUVs so sought after?

With summer approaching quickly, SUVs like the Toyota 4Runner are rugged enough to explore all off-road challenges and to chase your recreational pursuits. Highlander. Puyallup Used Cars, Pre-Owned Vehicles Tacoma, Federal Way. Puyallup Cars Under $15000, Tacoma, Federal Way, Sumner WA. Advantages of Buying New and Used Cars. Whether you’ve run your old car into the ground or need a change, replacing your car can be an overwhelming process full of questions.

One of the biggest questions to ask yourself is whether to buy new or used. The debate has raged on for years, but there are plenty of advantages to buying both new and used cars. 3 Advantages of New Cars Specification – One of the biggest advantages of a new car is making that car your own. 2015 Toyota Tacoma and Tundra. Last month we touched on the new lineup of 2015 Toyota cars, so it’s only fair to talk about the amazing new 2015 Toyota Trucks we have available as well. With multiple models, the Tacoma and the Tundra have what you’re looking for in your new truck. Toyota Tacoma Toyota’s nearly three decades of off-road heritage has laid the groundwork for the new Tacoma. It was inspired by true off-road enthusiasts and was engineered, tested and tuned by Toyota engineers. With a rugged body and available off-road technology, the Tacoma is ready to take you and your friends to new adventures.

Toyota Lease Incentives - Puyallup Toyota deals. Check out Toyota’s New Cars for 2015. Have you been looking into new cars for 2015? Look no further than the great 2015 Toyota lineup! Whether you’re looking for sporty, luxurious, iconic, efficient, or reliable, we’ve got a model for you. Take a look at this year’s lineup and see why now is a great time to upgrade to a 2015 Toyota. Avalon With multiple models to choose from, the Avalon is your top pick for luxury and comfort with a quiet, spacious interior and a smooth, responsive ride. Camry There’s a reason Camry has been the best-selling car in America for 11 of the last 12 years. Toyota dealers serving Seattle - Puyallup Toyota serving Seattle Tacoma Renton Auburn WA. Toyota Certified: The Best Used Cars to Buy. Toyotaofpuyallup. New Toyota Tundra - Toyota Tundra for sale - Toyota Puyallup dealership serving Seattle. Toyota Lease Incentives - Puyallup Toyota deals. Puyallup Toyota Dealer serving Tacoma, Seattle, Renton, Auburn, WA.

Plan is 2 years or 25,000 miles, whichever comes first. The new vehicle cannot be part of a rental or commercial fleet, or a livery/ taxi vehicle.