Mapping hate speech: homophobia and racism on twitter. Here on the data team, we tend to be skeptical about the accuracy of semantic analysis. 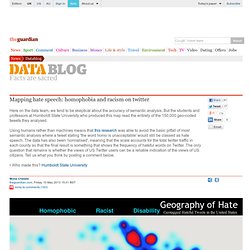 But the students and professors at Humboldt State University who produced this map read the entirety of the 150,000 geo-coded tweets they analysed. Using humans rather than machines means that this research was able to avoid the basic pitfall of most semantic analysis where a tweet stating 'the word homo is unacceptable' would still be classed as hate speech. The data has also been 'normalised', meaning that the scale accounts for the total twitter traffic in each county so that the final result is something that shows the frequency of hateful words on Twitter. The only question that remains is whether the views of US Twitter users can be a reliable indication of the views of US citizens. Tell us what you think by posting a comment below. • Who made this? The Ideological Animal. Cinnamon Stillwell never thought she'd be the founder of a political organization. She certainly never expected to start a group for conservatives, most of whom became conservatives on the same day—September 11, 2001.

She organized the group, the 911 Neocons, as a haven for people like her—"former lefties" who did political 180s after 9/11. Stillwell, now a conservative columnist for the San Francisco Chronicle , had been a liberal her whole life, writing off all Republicans as "ignorant, intolerant yahoos. " Yet on 9/11, everything changed for her, as it did for so many. In the days after the attacks, the world seemed "topsy-turvy. " Disgusted, she looked elsewhere.

In 2005, she wrote a column called "The Making of a 9/11 Republican. " We tend to believe our political views have evolved by a process of rational thought, as we consider arguments, weigh evidence, and draw conclusions. Left vs. Right Infographic (US) Liberal vs. Conservative Values - a Comparison. This page has not been updated recently. 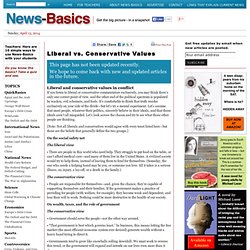 We hope to come back with new and updated articles in the future. Liberal and conservative values in conflict If you listen to liberal or conservative commentators exclusively, you may think there’s only one correct point of view, and the other end of the political spectrum is populated by wackos, evil schemers, and fools. It’s comfortable to think that truth resides exclusively on your side of the divide—but let’s try a mental experiment.

Let’s assume that most people, whatever their politics, sincerely believe in their ideals, and that those ideals aren’t all misguided. [Note: Not all liberals and conservatives would agree with every tenet listed here—but these are the beliefs that generally define the two groups.] On the social safety net The liberal view • There are people in this world who need help. The conservative view • People are responsible for themselves—and, given the chance, they’re capable of supporting themselves and their families. Look How Far We've Come Apart. In the witches’ brew of fearmongering, unkeepable promises and poll-tested metaphors that both parties serve up to the electorate every four years, you can always find this predictable dash of inspiration: the image of Americans uniting and working together for the sake of the country. 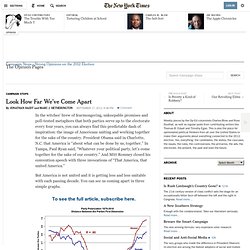 President Obama said in Charlotte, N.C. that America is “about what can be done by us, together.” In Tampa, Paul Ryan said, “Whatever your political party, let’s come together for the sake of our country.” And Mitt Romney closed his convention speech with three invocations of “That America, that united America.” But America is not united and it is getting less and less unitable with each passing decade. You can see us coming apart in three simple graphs. Theconversation. Is the field of social psychology biased against political conservatives? 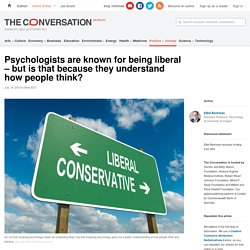 There has been intense debate about this question since an informal poll of over 1,000 attendees at a social psychology meeting in 2011 revealed the group to be overwhelmingly liberal. Formal surveys have produced similar results, showing the ratio of liberals to conservatives in the broader field of psychology is 14-to-1. Since then, social psychologists have tried to figure out why this imbalance exists.

The primary explanation offered is that the field has an anticonservative bias. I have no doubt that this bias exists, but it’s not strong enough to push people who lean conservative out of the field at the rate they appear to be leaving. I believe that a less prominent explanation is more compelling: learning about social psychology can make you more liberal. ‘Homo libertus’ becomes a social psychologist I used to be a libertarian. Click to enlarge Case study #1: gun control Case study #2: Charity.