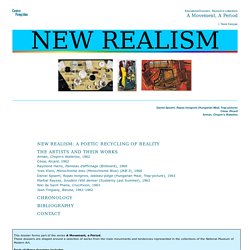 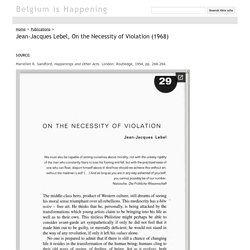 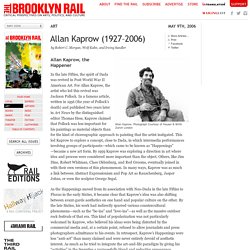 Photograph Courtesy of Hauser & Wirth Zürich London. Subscribe to read. Robert Whitman’s ‘Passport,’ in Two States at Once. Many of Mr. 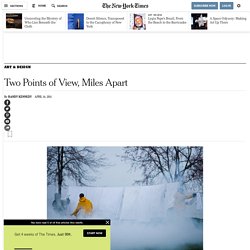 Whitman’s contemporaries and collaborators in the late 1950s and early ’60s — Claes Oldenburg, Jim Dine, Red Grooms, Lucas Samaras, Allan Kaprow— found the power of performance in its ephemerality. But Mr. Whitman, for all his derring-do, always wanted to create theatrical pieces that could be repeated and would endure, ones that have added up over the years to a collective portrait of what it feels like to be a human being in a hyperaware, information-dense world. Recalling Happenings Events on Eve of Pace Exhibition. Hans Hofmann . Home. Art History Basics on Performance Art: 1960's-Present. The term "Performance Art" got its start in the 1960s in the United States. 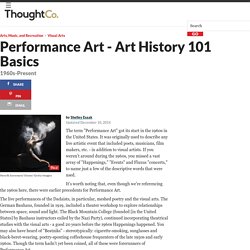 It was originally used to describe any live artistic event that included poets, musicians, film makers, etc. - in addition to visual artists. If you weren't around during the 1960s, you missed a vast array of "Happenings," "Events" and Fluxus "concerts," to name just a few of the descriptive words that were used. It's worth noting that, even though we're referencing the 1960s here, there were earlier precedents for Performance Art. Experimental Women in Flux. In 2009 The Museum of Modern Art acquired The Gilbert and Lila Silverman Fluxus Collection—a private collection devoted to the Fluxus art movement. 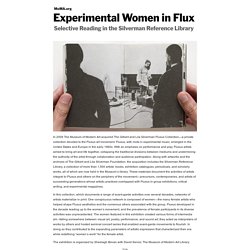 Fluxus, with roots in experimental music, emerged in the United States and Europe in the early 1960s. The Most Iconic Artists of the 1960s. The 1960s were marked by a wave of radicalism. 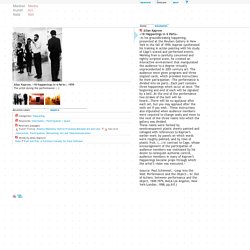 Working from a carefully conceived and tighlty scripted score, he created an interactive environment that manipulated the audience to a degree virtually unprecedented in 20th century art. The audience were given programs and three stapled cards, which provided instructions for their participation: ‹The performance is divided into six parts...Each part contains three happenings which occur at once. The beginning and end of each will be signaled by a bell. Allan Kaprow. Allan Kaprow, USA | 1927-2006 Untitled Essay and other works (1967, Great Bear Pamphlet, Something Else Press) [PDF, 796k] Some Recent Happenings (1966, Great Bear Pamphlet, Something Else Press) [PDF, 592k] How To Make A Happening (1966) [PDF, 112k] Push and Pull: A Furniture Comedy for Hans Hoffman[from Aspen 6A] Alan Kaprow Interview (1988, John Held. 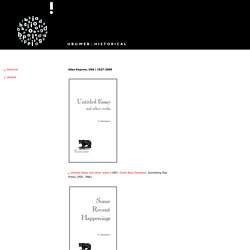 Alan Kaprow -- "Art Which Can't Be Art" (1986) Alan Kaprow -- "The Education of the Un-Artist" Part 1 (1972) [PDF] Performance Art 101: The Happening, Allan Kaprow. The artist who coined the term ‘happening’ was Allan Kaprow, an artist and lecturer who had studied painting with one of the key exponents of Abstract Expressionism, Hans Hofmann, in the 1940s. 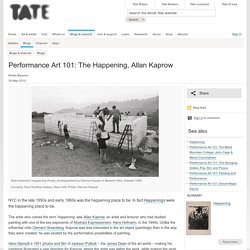 Unlike the influential critic Clement Greenberg, Kaprow was less interested in the art object (paintings) than in the way they were created: he was excited by the performative possibilities of painting. Hans Namuth’s 1951 photos and film of Jackson Pollock – the James Dean of the art world – making his paintings illustrated a new direction for Kaprow, where the artist was within the work, while making the work. After Pollock’s death, Kaprow wrote an essay on the Legacy of Pollock: exploring what he thought Pollock had meant for painting, art and life.

He suggested that the art to come was one that incorporated everyday life, and everyday objects. Museum Piece - Dine re-enactment w changes. Brutalist Architecture—masterpieces by architects Le Corbusier, Breuer, and more. Of all the styles of architecture that have emerged since the beginning of the 20th century, Brutalism may be one of the most divisive. This stark, concrete-centric offshoot of earlier forms of modernism became popular in England and the rest of Europe after World War II in part because it provided a sense of security in areas that had been devastated during bombings. Proponents praised its explicit functionality, while critics complained about lack of subtlety and, well, beauty. Brutalist and Brutalist-influenced municipal buildings, campuses, and housing projects, many designed by their day’s top architects, popped up around the world until the style’s popularity began to wane in the 1970s. In the subsequent decades, as lesser specimens deteriorated or were torn down, Brutalism looked like it would become a historical footnote—but recently some of the most impressive examples are being reconsidered and preserved.

View Slideshow. What do we Mean by Brutalist Architecture ? Concrete monstrosity, the architecture we love to hate – that’s how people used to describe brutalist architecture. There was probably not a single architectural style (and whether it is a style or not is yet to be discussed) that was demonized and hated as much as Brutalism, especially during the 70’s, the 80’s and even in the 90’s as well. The reasons for this unsolicited crucifixion of a seemingly harmless thing – such as the aesthetics of a building – come from various sources. Some of them are mediated through human incapacity to separate societal circumstances from the physical occurrence that unwillingly becomes its symbol.

Culture - Ten beautiful Brutalist buildings. 10 Icons of Brutalist Architecture. Concrete jungle: why brutalist architecture is back in style. Mies van der Rohe was born first, in 1886, in Aachen, Germany. Le Corbusier arrived the following year, and 250 miles to the south, in La Chaux-de-Fonds, Switzerland. Mies went on to become the godfather of the steel-and-glass international style; Corbu, enamored with the possibilities of concrete, essentially created brutalism. Which means that not only were the two architects great builders in their own right; they were also responsible for creating the greatest sibling rivalry in the history of architecture. Brutalism. Brutalism: From cool to crude and back again. "A lot of post-war developments were really badly designed and badly maintained housing estates," says Chadwick.

Grospierre concurs, reflecting that in Poland there are numerous "large-scale housing estates done very cheaply. " Space Museum and Heliport, Tripoli. "Flats, many stories up, don't have direct access to outside space, so the 'outside' is on the ground level," Chadwick explains. Brutalism. Brutalism. Unique Brutalism - Celebrating 35 Years of the Barbican 12:00 - 19 March, 2017 The Barbican Centre in London is celebrating its 35th anniversary.

Widely regarded as the pinnacle of the Brutalist movement, the mixed-use development is home to 4,000 residents, the Guildhall School of Music & Drama, and the London Symphony Orchestra. Located in the heart of London, the Barbican is just one example of how Brutalist architecture forms a central part of our cities. #SOSBRUTALISM. With a database of this size, there are various intricacies in categorization and classification. The glossary gives a brief overview of the fundamental considerations and helps provide answers to the most frequently asked questions. Brutalism. 25. Cabaret Voltaire - The 25 Best Performance Art Pieces of All Time. Jim Dine Most Important Art. Happenings and Other Acts. Postwar America: An Encyclopedia of Social, Political, Cultural, and ... - James Ciment. How Happenings Are Happening Now. “Welcome back, my friends to the show that never ends...” Who knew that masterful track from prog-rockers Emerson, Lake and Palmer would prove so prescient in tone and spirit?