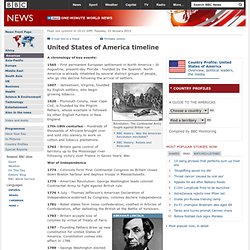 North America is already inhabited by several distinct groups of people, who go into decline following the arrival of settlers. 1607 - Jamestown, Virginia, founded by English settlers, who begin growing tobacco. 1620 - Plymouth Colony, near Cape Cod, is founded by the Pilgrim Fathers, whose example is followed by other English Puritans in New England. 17th-18th centuries - Hundreds of thousands of Africans brought over and sold into slavery to work on cotton and tobacco plantations. 1763 - Britain gains control of territory up to the Mississippi river following victory over France in Seven Years' War. War of Independence 1774 - Colonists form First Continental Congress as Britain closes down Boston harbour and deploys troops in Massachusetts. The Rise and Fall of Jim Crow. Jim Crow Stories. Martin Luther King. Study Abroad with SEA Semester: Ocean Science & Sailing Program - Nautical, Maritime, & Oceanography Studies.

Moorea: Maritime History and Culture When Polynesians first arrived at Moorea, they were unable to survive solely on the terrestrial resources and developed a close relationship with the ocean. 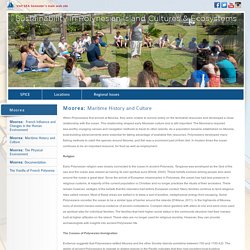 This relationship shaped early Moorean culture and is still important. The Mooreans required sea-worthy voyaging canoes and navigation methods to travel to other islands. As a population became established on Moorea, boat-building advancements were essential for taking advantage of available fish resources. Polynesians developed many fishing methods to catch the species around Moorea, and fish was a prominent part of their diet. Religion. Polynesian Navigation. JFK. 'I have a dream' On 28 August, 1963, Martin Luther King delivered his magnificent "I have a dream speech" on the steps of the Lincoln Memorial in Washington. 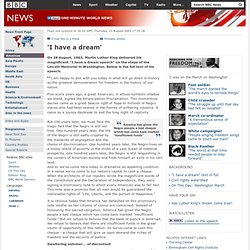 Below is the full text of his speech. I am happy to join with you today in what will go down in history as the greatest demonstration for freedom in the history of our nation. Five score years ago, a great American, in whose symbolic shadow we stand, signed the Emancipation Proclamation. This momentous decree came as a great beacon light of hope to millions of Negro slaves who had been seared in the flames of withering injustice. It came as a joyous daybreak to end the long night of captivity.

But 100 years later, we must face the tragic fact that the Negro is still not free. And so we've come here today to dramatize an appalling condition. It is obvious today that America has defaulted on this promissory note insofar as her citizens of colour are concerned. Religion in American History: Martin Luther King on Barry Goldwater: Surprising or Otherwise Interesting Primary Sources, Part IX. Randall Stephens Martin Luther King, Jr., reflected on the career and influence of Barry Goldwater several years after LBJ's landslide victory. 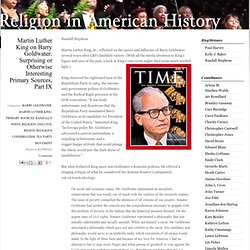 (With all the media attention to King's legacy and uses of the past, a look at King's own views might shed some much needed light.) King observed the rightward turn of the Republican Party in 1964, the intense anti-government polices of Goldwater, and the Radical Right presence at the GOP convention. "It was both unfortunate and disastrous that the Republican Party nominated Barry Goldwater as its candidate for President of the United States," lamented King. 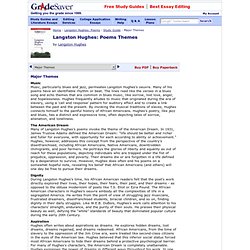 Many of his poems have an identifiable rhythm or beat. The lines read like the verses in a blues song and echo themes that are common in blues music, like sorrow, lost love, anger, and hopelessness. Langston Hughes: Poems Study Guide : Summary and Analysis of "The Weary Blues" "The Weary Blues" Summary: The speaker describes hearing a "Negro" play a "drowsy syncopated tune" while swaying back and forth on Lenox Avenue a few nights ago, under the light of a gas lamp. 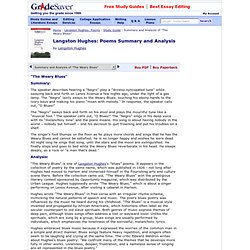 The "Negro" lazily sways to the Weary Blues, touching his ebony hands to the ivory keys and making his piano "moan with melody. " In response, the speaker calls out, "O Blues! " Influencing Others in Our World. Cms.ac-martinique.fr/discipline/anglais/file/docs/mlkday-worksheet.pdf. I Have A Dream Speech Analysis Lesson Plan. Find Every Literary Term in Martin Luther King Jr.’s Most Famous Speech Dr. 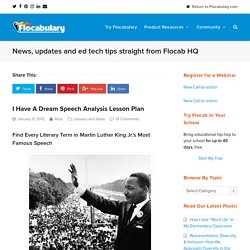 Martin Luther King Jr. On August 28, 1963, Martin Luther King, Jr. led a march on Washington, D.C. The speech he gave that day is one of the best known in American history. When people remember the “I Have a Dream” speech, as it has come to be known, they recall King’s message about civil rights. This lesson plan allows students to review literary terms, rhetorical devices and figurative language with a scavenger hunt through “I Have a Dream” speech. The Lesson Plan 1. I Have A Dream Speech Analysis Lesson Plan. Lenny Kravitz Black And White America. I Celebrate MLK! Rap - Black History Video For Kids.

The Rise and Fall of Jim Crow. A Brief History of the United States of America. Learning Zone Class Clips - Martin Luther King describes the workings of segregation in the southern USA - History Video. Martin Luther King: I Have a Dream revisited.