Who's in Charge of Our Minds? The Interpreter. One of the most fascinating discoveries of modern neuroscience is that the brain is a collection of distinct modules (grouped, highly connected neurons) performing specific functions rather than a unified system. 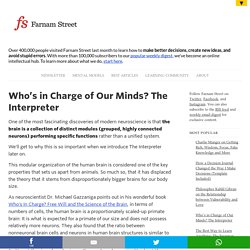 We'll get to why this is so important when we introduce The Interpreter later on. This modular organization of the human brain is considered one of the key properties that sets us apart from animals. The Difference Between Rationality and Intelligence. Photo ARE you intelligent — or rational? 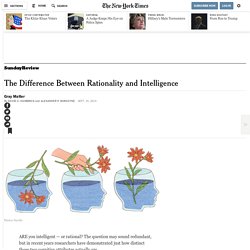 The question may sound redundant, but in recent years researchers have demonstrated just how distinct those two cognitive attributes actually are. It all started in the early 1970s, when the psychologists Daniel Kahneman and Amos Tversky conducted an influential series of experiments showing that all of us, even highly intelligent people, are prone to irrationality. Across a wide range of scenarios, the experiments revealed, people tend to make decisions based on intuition rather than reason. Rationality more important than intelligence: IQ tests miss detecting some rational thinking skills totally « EDUCATION IN JAPAN COMMUNITY Blog. … says an expert on human development and applied psychology at the University of Toronto.

He says “institutions still devote far more attention and resources to intelligence than to teaching people how to think in order to reach their goals.” Only recently have psychologists come up with the tools to measure rational and irrational thinking. The article suggests that RQ tests or Rational Quotient tests could be constructed that would be “highly useful” to eliminate errors in medical and legal decision-making for example. It also suggests that schools, businesses and government should focus on those rational thinking skills that intelligence tests miss. The kind of smart that IQ tests miss Tuesday, April 7, 2009 By Keith Stanovich IN 2002, cognitive scientist Daniel Kahneman of Princeton University won the Nobel Prize in Economics for work done with his longtime collaborator Amos Tversky (who died in 1996). The thinking errors they uncovered are not trivial mistakes in a parlour game. Myths about Rationality on Psych Central.

Rationality has been a popular topic of discussion for many years. 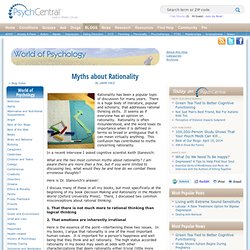 There is a huge body of literature, popular and scholarly, that addresses rational thinking skills. It seems as if everyone has an opinion on rationality. Rationality is often misunderstood, and the word loses its importance when it is defined in terms so broad or ambiguous that it can mean virtually anything. This confusion has contributed to myths concerning rationality. In a recent interview I asked cognitive scientist Keith Stanovich: Critical Thinking: What is True and What to Do. Many researchers suggest that a key characteristic of critical thinking is the ability to recognize one’s own fallibility when evaluating and generating evidence — recognizing the danger of weighing evidence according to one’s own beliefs. 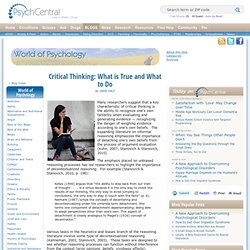 The expanding literature on informal reasoning emphasizes the importance of detaching one’s own beliefs from the process of argument evaluation (Kuhn, 2007; Stanovich & Stanovich, 2010). The emphasis placed on unbiased reasoning processes has led researchers to highlight the importance of decontextualized reasoning. For example (Stanovich & Stanovich, 2010, p. 196): Kelley (1990) argues that “the ability to step back from our train of thought . . . . is a virtue because it is the only way to check the results of our thinking, the only way to avoid jumping to conclusions, the only way to stay in touch with the facts” (p. 6). 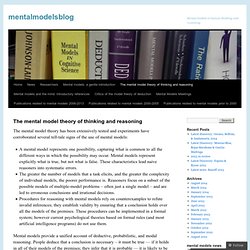 Mental models represent explicitly what is true, but not what is false. These characteristics lead naive reasoners into systematic errors.The greater the number of models that a task elicits, and the greater the complexity of individual models, the poorer performance is. Reasoners focus on a subset of the possible models of multiple-model problems – often just a single model – and are led to erroneous conclusions and irrational decisions.Procedures for reasoning with mental models rely on counterexamples to refute invalid inferences; they establish validity by ensuring that a conclusion holds over all the models of the premises. Mental models provide a unified account of deductive, probabilistic, and modal reasoning. The Simple Logical Puzzle That Shows How Illogical People Are. In the 1960s, the English psychologist Peter Wason devised an experiment that would revolutionize his field. 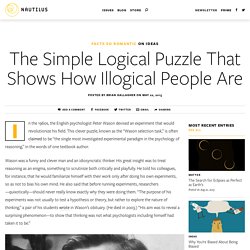 This clever puzzle, known as the “Wason selection task,” is often claimed to be “the single most investigated experimental paradigm in the psychology of reasoning,” in the words of one textbook author. Wason was a funny and clever man and an idiosyncratic thinker. His great insight was to treat reasoning as an enigma, something to scrutinize both critically and playfully. He told his colleagues, for instance, that he would familiarize himself with their work only after doing his own experiments, so as not to bias his own mind. He also said that before running experiments, researchers—quixotically—should never really know exactly why they were doing them. Wason tells you that if a card shows an even number on one face, then its opposite face is blue.

But if it’s irrational, why are we prone to do it?