The More Gender Equality, the Fewer Women in STEM. The issue doesn’t appear to be girls’ aptitude for STEM professions. 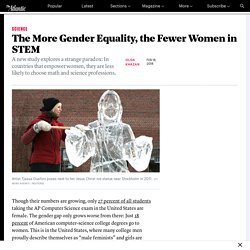 In looking at test scores across 67 countries and regions, Stoet and Geary found that girls performed about as well or better than boys did on science in most countries, and in almost all countries, girls would have been capable of college-level science and math classes if they had enrolled in them. But when it comes to their relative strengths, in almost all the countries—all except Romania and Lebanon—boys’ best subject was science, and girls’ was reading.

(That is, even if an average girl was as good as an average boy at science, she was still likely to be even better at reading.) Across all countries, 24 percent of girls had science as their best subject, 25 percent of girls’ strength was math, and 51 percent excelled in reading. For boys, the percentages were 38 for science, 42 for math, and 20 for reading. No, Postmodernism is Not Dead (and Other Misconceptions) - Areo. I first began talking seriously about postmodernism in an epistemological sense seven years ago. 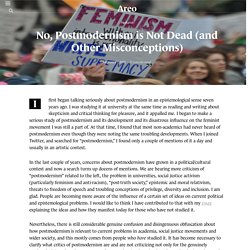 The End of Men. In the 1970s the biologist Ronald Ericsson came up with a way to separate sperm carrying the male-producing Y chromosome from those carrying the X. 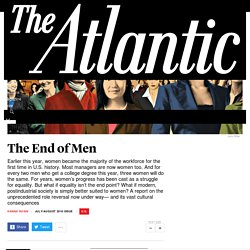 He sent the two kinds of sperm swimming down a glass tube through ever-thicker albumin barriers. The sperm with the X chromosome had a larger head and a longer tail, and so, he figured, they would get bogged down in the viscous liquid. The sperm with the Y chromosome were leaner and faster and could swim down to the bottom of the tube more efficiently. A Cognitive Difference Between Women and Men Gives Men an Edge in Spatial Understanding. The Injustice of the ‘Rape-Culture’ Theory. Contra Grant On Exaggerated Differences. An article by Adam Grant called Differences Between Men And Women Are Vastly Exaggerated is going viral, thanks in part to a share by Facebook exec Sheryl Sandberg. 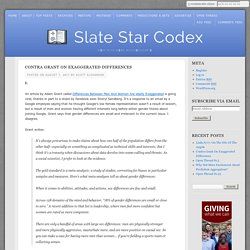 It’s a response to an email by a Google employee saying that he thought Google’s low female representation wasn’t a result of sexism, but a result of men and women having different interests long before either gender thinks about joining Google. Grant says that gender differences are small and irrelevant to the current issue. I disagree. The Google Memo: Four Scientists Respond - Quillette. Lee Jussim Professor Lee Jussim Lee Jussim is a professor of social psychology at Rutgers University and was a Fellow and Consulting Scholar at the Center for Advanced Study in the Behavioral Sciences at Stanford University (2013-15). 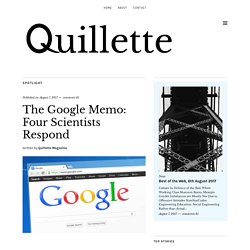 He has served as chair of the Psychology Department at Rutgers University and has received the Gordon Allport Intergroup Relations Prize, and the APA Early Career Award for Distinguished Contributions to Psychology. He has published numerous articles and chapters and edited several books on social perception, accuracy, self-fulfilling prophecies, and stereotypes. Re:Work - White lies in the workplace don’t help. Would you rather give harsh, truthful criticism or provide nicer, less accurate feedback? 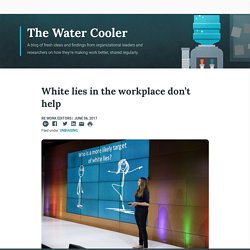 It turns out it may depend on how we perceive the recipient, and we wind up sugarcoating feedback for women more often than for men. Dr. Leaving Facebook. The Failures of Mainstream Feminism. To reclaim the truly radical spirit of American feminism, we should call mainstream feminists something more anodyne: “pro-woman.” 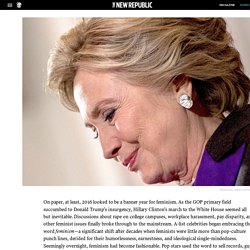 The designation seems fitting, since mainstream feminists work to shore up the status quo, seeking equal access to the system of oppression. That explains why one of the buzzwords favored by pro-woman commentators is self-empowerment—a term that gained currency on the right in the 1980s to characterize the individual’s obligation to take responsibility for her position in life. Men Explain Things to Me. I still don’t know why Sallie and I bothered to go to that party in the forest slope above Aspen. 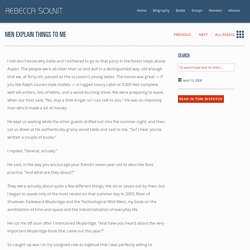 The people were all older than us and dull in a distinguished way, old enough that we, at forty-ish, passed as the occasion’s young ladies. The house was great — if you like Ralph Lauren-style chalets — a rugged luxury cabin at 9,000 feet complete with elk antlers, lots of kilims, and a wood-burning stove. We were preparing to leave, when our host said, “No, stay a little longer so I can talk to you.”

He was an imposing man who’d made a lot of money. Theconversation. That males are naturally promiscuous while females are coy and choosy is a widely held belief. 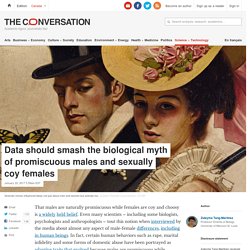 Even many scientists – including some biologists, psychologists and anthropologists – tout this notion when interviewed by the media about almost any aspect of male-female differences, including in human beings. In fact, certain human behaviors such as rape, marital infidelity and some forms of domestic abuse have been portrayed as adaptive traits that evolved because males are promiscuous while females are sexually reluctant. These ideas, which are pervasive in Western culture, also have served as the cornerstone for the evolutionary study of sexual selection, sex differences and sex roles among animals. What's behind the urge to uncover an 'authentic self'? Every Tuesday on Instagram, millions of users, mostly in their teens to their early 30s, upload an image for #transformationtuesday. 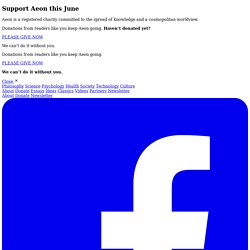 On one side of the shot, there’s a selfie of a young man, topless or in underwear, his body slim, pale and unflatteringly lit, phone in hand before a mirror; or a young woman, similarly undressed, lumpy, undefined, slouching. In the second half of the frame, it’s the same body, but changed, enhanced. The idea that gender is a spectrum is a new gender prison. What is gender? This is a question that cuts to the very heart of feminist theory and practice, and is pivotal to current debates in social justice activism about class, identity and privilege. In everyday conversation, the word ‘gender’ is a synonym for what would more accurately be referred to as ‘sex’. Perhaps due to a vague squeamishness about uttering a word that also describes sexual intercourse, the word ‘gender’ is now euphemistically used to refer to the biological fact of whether a person is female or male, saving us all the mild embarrassment of having to invoke, however indirectly, the bodily organs and processes that this bifurcation entails.

Teaching Men to Be Emotionally Honest. In many ways, the young men who take my seminar — typically, 20 percent of the class — mirror national trends. Based on their grades and writing assignments, it’s clear that they spend less time on homework than female students do; and while every bit as intelligent, they earn lower grades with studied indifference. When I asked one of my male students why he didn’t openly fret about grades the way so many women do, he said: “Nothing’s worse for a guy than looking like a Try Hard.”

In a report based on the 2013 book “The Rise of Women: The Growing Gender Gap in Education and What It Means for American Schools,” the sociologists Thomas A. The Anima and Animus. Is Legalized Prostitution Safer? - Room for Debate. A Cold War Fought by Women. A Man. A Woman. Just Friends? There’s a history here, and it’s a surprisingly political one. Friendship between the sexes was more or less unknown in traditional society. Men and women occupied different spheres, and women were regarded as inferior in any case. A few epistolary friendships between monastics, a few relationships in literary and court circles, but beyond that, cross-sex friendship was as unthinkable in Western society as it still is in many cultures.

Then came feminism — specifically, Mary Wollstonecraft, the mother of feminism, in the late 18th century. Wollstonecraft was actually wary of platonic relationships, which could lead too easily, she thought, to mischief. Swedish School De-emphasizes Gender Lines. Male and Female Brains Really Are Built Differently - Olga Khazan. Sex redefined. Study debunks notion that men and women are psychologically distinct. By Eric W. DolanMonday, February 4, 2013 17:33 EDT A first-of-its-kind study to be published in the February issue of the Journal of Personality and Social Psychology has dealt a devastating blow to the notion that men and women are fundamentally different when it comes to how they think and act. Ranked: Disney Princesses From Least To Most Feminist. BEAUTY-AT-ANY-COST.PDF (application/pdf Object) Fotoshop by Adobé.

Dove releases rogue Photoshop action that undoes 'real beauty' manipulations. Dove Real Beauty Sketches. Killing Us Softly 4 - Trailer [Featuring Jean Kilbourne] Masculinity Is Killing Men: The Roots of Men and Trauma. “The three most destructive words that every man receives when he’s a boy is when he’s told to 'be a man,'” —Joe Ehrmann, coach and former NFL player. The One Thing All Men Feel, But Never Admit. Every single boy growing up in the United States has heard these phrases at least once over the course of his life. Miss representation Trailer. Dads on Sitcoms - Alexis C. Madrigal. Men Feel Bad Around Smart, Successful Women. Men's Magazines and the Construction of Masculinity. The Rise and Fall of Charm in American Men - Benjamin Schwarz.

If one were to recast The Rockford Files, as Universal Pictures is intending to do, would the Frat Pack actor Vince Vaughn seem the wisest choice to play Jim Rockford, the character James Garner inhabited with such sly intelligence and bruised suavity? Universal apparently thinks so. 'It's Not a Contradiction for Men to Discriminate Against Other Men' - Noah Berlatsky. The Demise Of Guys By Philip Zimbardo. The-death-of-adulthood-in-american-culture. The Danger in Demonizing Male Sexuality. Overdoing Gender. Aggressive advertising makes for aggressive men. Colin Stokes: How movies teach manhood. Images of Men in Advertising. A New Masculinity. Lumbersexuality and Its Discontents. The Four Archetypes of the Mature Masculine: Introduction.

Why I loathe feminism ... and believe it will ultimately destroy the family. Feminine Sexual Repression. The Truth About Female Desire: It’s Base, Animalistic and Ravenous. V1P1-No13_Dykeman_1179608105947.pdf (application/pdf Object) A short history of "feminist" anti-feminists. Why Women Aren’t Crazy. Why I Believe Men Belong in the Feminist Movement. The Roots of Individualist Feminism in 19th-Century America by Wendy McElroy. History of feminism. The Myth of Matriarchal Prehistory. History of Marriage in Western Civilization. Think Tank: Transcript for "Has Feminism Gone Too Far?" Resolved: Women Are Better Than Men. The Weekend Interview With Camille Paglia: A Feminist Defense of Masculine Virtues.

Camille Paglia: How Bill Clinton is like Bill Cosby. ‘Everything in the world is about sex’