Running is the Worst Way to Get Fit - Tonic. Glogin?URI= What Happens To Our Brains When We Exercise And How It Makes Us Happier. Editor's Note: This is one of the most-read leadership articles of 2014. 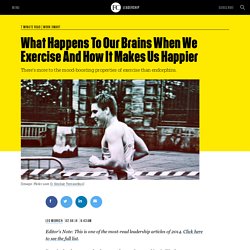 Click here to see the full list. Exercise has been touted to be a cure for nearly everything in life, from depression, to memory loss, Alzheimer’s disease, Parkinson’s and more. Does It Matter How Many Reps You Do When You Work Out? Lifting Weights? No Need to Go Heavy. You don't need to feel wimpy for lifting little weight at the gym: A new study finds that lifting light weights is just as effective as lifting heavy ones for building muscle. 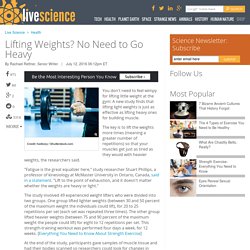 The key is to lift the weights more times (meaning a greater number of repetitions) so that your muscles get just as tired as they would with heavier weights, the researchers said. "Fatigue is the great equalizer here," study researcher Stuart Phillips, a professor of kinesiology at McMaster University in Ontario, Canada, said in a statement. "Lift to the point of exhaustion, and it doesn't matter whether the weights are heavy or light. " The study involved 49 experienced weight lifters who were divided into two groups. One group lifted lighter weights (between 30 and 50 percent of the maximum weight the individuals could lift), for 20 to 25 repetitions per set (each set was repeated three times). Glogin?URI= This is What Happens to Your Body When You Stop Exercising. The Rise of the Minimalist Workout. Peter Hince/Getty Images Phys Ed Gretchen Reynolds on the science of fitness. 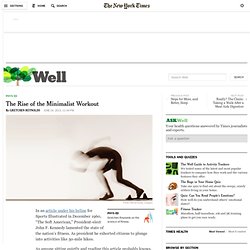 Researchers Claim To Discover the Single Most Efficient Exercise Regimen. Scientific 7 Minute Workout Makes Your Android Phone an Exercise Guide. 7-Minute Workout: More Effective Version and Exercises. The desire to maximize your fitness while minimizing your sweat time became very apparent with the buzz that formed around “The Scientific 7-Minute Workout.” 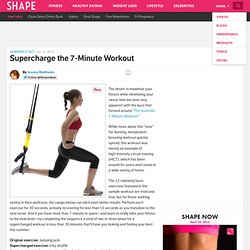 While news about this “new” fat-burning, metabolism-boosting workout quickly spread, this workout was merely an example of high-intensity circuit training (HICT), which has been around for years and comes in a wide variety of forms. The 12 relatively basic exercises featured in the sample workout are tried and true, but for those seeking variety in their workouts, the swaps below can elicit even better results. Perform each exercise for 30 seconds, actively recovering for less than 15 seconds as you transition to the next move. The Heart-Pumping Bodyweight Workout You Can Do in a Commercial Break. #1 Exercises Guide! Over 300+ Free Exercise Videos And Guides!

What Happens To Our Brains When We Exercise And How It Makes Us Happier. The use of lethal force by police officers in Minnesota and Baton Rouge, Louisiana, has once again sparked protests over the violent dynamic between citizens and the police. Meanwhile, the tragic, horrific shootings of police officers in Dallas has complicated the Black Lives Matter message and reinforced fears of racially motivated police violence. The ideal today is "democratic policing," a concept developed by scholars like Gary T. Marx at MIT. Broadly, this refers to a police force that is publicly accountable, subject to the rule of law, respectful of human dignity, and that intrudes into citizens' lives only under certain limited circumstances. Partly in response to this ideal, policing in America has evolved considerably over the past 50 years.

The 20th century has seen a slow but steady integration of minorities and women within police forces. Some of these changes have been positive, but as recent events show, many problems remain. Not all police forces are equal. Why Your Muscles Get Sore (and What You Can Do About It) How Exercise Can Calm Anxiety. Cultura/Getty Images Phys Ed Gretchen Reynolds on the science of fitness. 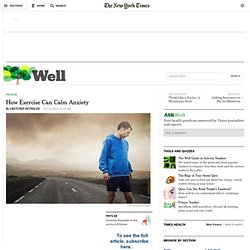 In an eye-opening demonstration of nature’s ingenuity, researchers at Princeton University recently discovered that exercise creates vibrant new brain cells — and then shuts them down when they shouldn’t be in action. For some time, scientists studying exercise have been puzzled by physical activity’s two seemingly incompatible effects on the brain. On the one hand, exercise is known to prompt the creation of new and very excitable brain cells.

10 Minutes of Exercise Yields Hour-Long Effects. A recent study shows that ten minutes of brisk exercise triggers metabolic changes that last at least an hour. What's more, the more fit you are, the more benefits you will get. Researchers measured biochemical changes in the blood of a variety of people. Exercise Is Really Good for You. Like, REALLY Good for You. Why Stretching Is Just as Important as Exercise. Yeah, I thought the whole stretching things was debunked long ago. 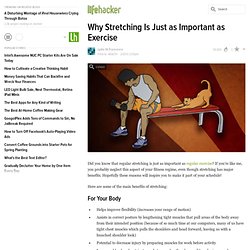 Sure, there are benefits to stretching, but I was led to understand that it does nothing to prevent injury. Stretching for flexibility seems common sense, otherwise it seems to be a holdover from days gone by. People who say that stretching doesn't prevent injury haven't tried playing a contact sport without it. Pre-game stretches are simply to ensure no essential muscles are cramped before starting. 4 Simple Steps To Get Great Posture (Video) Our posture both reflects and creates how we feel and how we live, so obviously good posture is so important! 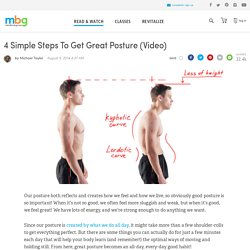 When it's not so good, we often feel more sluggish and weak, but when it's good, we feel great! We have lots of energy, and we're strong enough to do anything we want. Since our posture is created by what we do all day, it might take more than a few shoulder-rolls to get everything perfect. But there are some things you can actually do for just a few minutes each day that will help your body learn (and remember!) 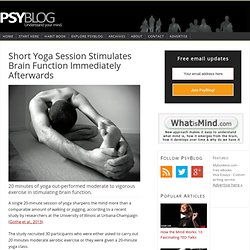 A single 20-minute session of yoga sharpens the mind more than a comparable amount of walking or jogging, according to a recent study by researchers at the University of Illinois at Urbana-Champaign (Gothe et al., 2013). The study recruited 30 participants who were either asked to carry out 20 minutes moderate aerobic exercise or they were given a 20-minute yoga class. In the yoga class, people adopted various postures including standing, sitting and lying down while contracting and relaxing muscles. Yoga also includes a meditative element as participants are encouraged to focus on breathing. Yoga Poses - Tadasana mountain yoga pose the fundamentals. 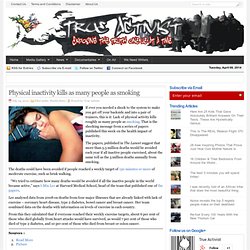 That is the shocking message from a series of papers published this week on the health impact of inactivity. The papers, published in The Lancet suggest that more than 5.3 million deaths would be avoided each year if all inactive people exercised, about the same toll as the 5 million deaths annually from smoking. The deaths could have been avoided if people reached a weekly target of 150 minutes or more of moderate exercise, such as brisk walking. Lee analysed data from 2008 on deaths from four major illnesses that are already linked with lack of exercise – coronary heart disease, type 2 diabetes, bowel cancer and breast cancer. Her team combined data on the deaths with information on levels of exercise in each country. Sources : BMI Calculator Plus: Personalized BMI for Your Body Type and Metabolism. People use a lot of numbers to talk about weight and fitness. 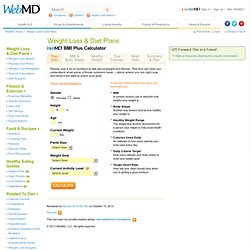