'Slacktivism' that works: 'Small changes' matter. In 2013, an online petition persuaded a national organization representing high school coaches to develop materials to educate coaches about sexual assault and how they could help reduce assaults by their athletes. 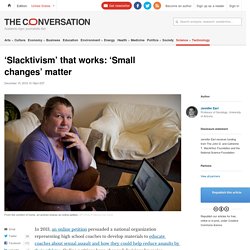 Online petitions have changed decisions by major corporations (ask Bank of America about its debit card fees) and affected decisions on policies as diverse as those related to survivors of sexual assault and local photography permitting requirements. Organizing and participating in these campaigns has also been personally meaningful to many. But, a nostalgia for 1960s activism leads many to assume that “real” protest only happens on the street. Critics assume that classic social movement tactics such as rallies and demonstrations represent the only effective model for collectively pressing for change.

Putting your body on the line and doing that collectively for decades is viewed as the only way “people power” works. Diversity of tactics or unity in action? Protesters march outside a meeting of the IMF and World Bank in Washington, D.C. 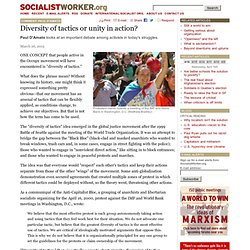 (Matthew Bradley) ONE CONCEPT that people active in the Occupy movement will have encountered is "diversity of tactics. " What does the phrase mean? Without knowing its history, one might think it expressed something pretty obvious--that our movement has an arsenal of tactics that can be flexibly applied, as conditions change, to achieve our objectives. But that is not how the term has come to be used. What ‘diversity of tactics’ really means for Occupy Wall Street. Occupy Wall Street marchers watch from the pedestrian walkway as hundreds of their comrades take to the roadway of the Brooklyn Bridge on October 1. 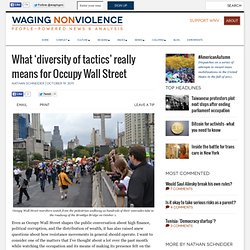 Even as Occupy Wall Street shapes the public conversation about high finance, political corruption, and the distribution of wealth, it has also raised anew questions about how resistance movements in general should operate. The Whole World Stopped Watching (Part II): How "Diversity of Tactics" offers neither. 41_23_Conway.pdf (application/pdf Object) The Cancer in Occupy - Chris Hedges' Columns. The Cancer in Occupy Posted on Feb 6, 2012 By Chris Hedges The Black Bloc anarchists, who have been active on the streets in Oakland and other cities, are the cancer of the Occupy movement. 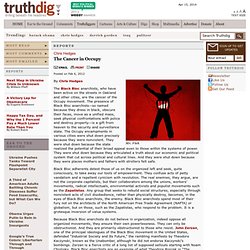 The presence of Black Bloc anarchists—so named because they dress in black, obscure their faces, move as a unified mass, seek physical confrontations with police and destroy property—is a gift from heaven to the security and surveillance state. The Occupy encampments in various cities were shut down precisely because they were nonviolent. Black Bloc adherents detest those of us on the organized left and seek, quite consciously, to take away our tools of empowerment. Because Black Bloc anarchists do not believe in organization, indeed oppose all organized movements, they ensure their own powerlessness.

“Of course,” the article went on, “the social struggles of exploited and oppressed people cannot be expected to conform to some abstract anarchist ideal. There is a word for this—“criminal.” Real and Fake Anarchism. Exclusive to STR September 24, 2007 People arguing for the stateless society, i.e. the abolishment of the state along with whatever coercive hierarchies in society, sometimes find themselves in a position where they hesitate to use the word best describing their position: anarchism. 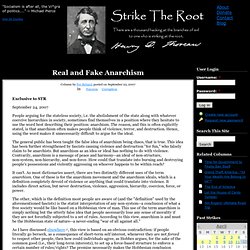 The reason, and this is often explicitly stated, is that anarchism often makes people think of violence, terror, and destruction. Hence, using the word makes it unnecessarily difficult to argue for the ideal. WebCite query result. How not to block the black bloc. The headline in the Philadelphia Inquirer told us last week that, on the other side of the country, a brick hit a police officer in Oakland and sent him to the hospital. 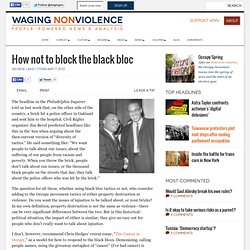 Civil Rights organizer Jim Bevel predicted headlines like this in the ’60s when arguing about the then-current version of “diversity of tactics.” He said something like: “We want people to talk about our issues, about the suffering of our people from racism and poverty. Open Letter to the Occupy Movement: Why We Need Agreements @ Alliance of Community Trainers. From the Alliance of Community Trainers, ACT The Occupy movement has had enormous successes in the short time since September when activists took over a square near Wall Street. 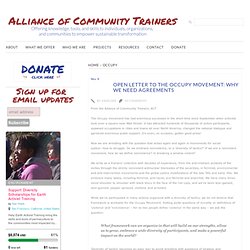 It has attracted hundreds of thousands of active participants, spawned occupations in cities and towns all over North America, changed the national dialogue and garnered enormous public support. It’s even, on occasion, gotten good press! Now we are wrestling with the question that arises again and again in movements for social justice—how to struggle. Starhawk @ Occupy Oakland Nonviolence vs Diversity of Tactics. Black Bloc: Diversity of Tactics. Paint the Other Cheek. Members of the Occupy Wall Street movement use a ladder to scale a chain link fence around a vacant lot owned by an Episcopal church in New York, Saturday, Dec. 17, 2011. 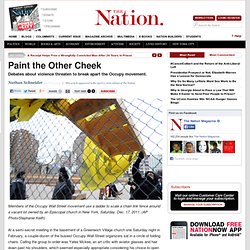 Draft proposal to be submitted re: Diversity of Tactics (feedback welcome!) After attending the GA this evening and watching Friday’s on the livestream, following and contributing to the various discussions on the question of whether this is (or should remain) a nonviolent movement, and seeing a lot of strong feelings being voiced but not anything being done about it in a formal way, I decided to draft this proposal. 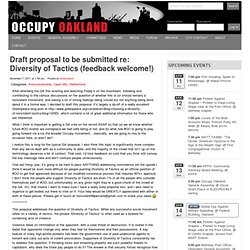 It’s largely a rip-off of a really excellent Greenpeace blog post at which contains a lot of great additional information for those who are interested. What I think is important is getting a GA vote on the record ASAP so that (a) we all know whether future #OO events are someplace we feel safe being or not, and (b) what role #OO is going to play going forward vis-a-vis the broader Occupy movement….basically, are we going to rise to the occasion here, or aren’t we? I realize this is long for the typical GA proposal. Snippets from the ongoing Occupy Oakland nonviolence vs diversity of tactics discussion.

Divisiveness, diversity of tactics, and ideology in Occupy Oakland: facing the "a$$hole problem" The O.E.D. explains that the adjective "divisive" means the following: 1. 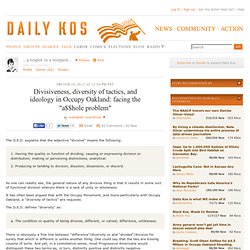 Having the quality or function of dividing; causing or expressing division or distribution; making or perceiving distinctions, analytical. 2. Producing or tending to division, disunion, dissension, or discord. Statement of Diversity of Tactics.