Hp posters. 7 Signs You're Giving Up And Settling In Your Relationship. After many failed relationship attempts, I started to think that maybe I’ve been a little too picky in terms of dating. 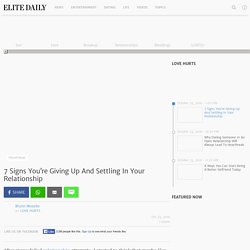 I had been in relationships with several great and good looking guys, who all had plenty of wonderful qualities. I was reminded constantly by my friends and family that each one was a “great catch.” When I would find myself feeling sad or lonely in those past relationships, I just wrote my feelings off as being too needy, or too emotional. I once even had an ex tell me straight up that I ask for way too much, so I started thinking that maybe he was right and I would just be lonely forever. I started to think that maybe I complained about things that others just dealt with and I needed to suck it up. The fear of being alone and the risk of losing someone who was potentially a great fit for me was always far too great to just end the relationship.

I needed someone who accepted the things I was asking for, and didn’t make me feel bad about them. Best Friends Build Own Private Neighborhood to Be Together Forever. For many groups of faithful friends, adulthood means accepting that logistics are often the biggest obstacle to maintaining relationships. 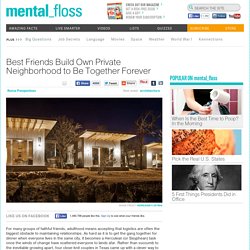 As hard as it is to get the gang together for dinner when everyone lives in the same city, it becomes a Herculean (or Sisyphean) task once the winds of change have scattered everyone to lands afar. Rather than succumb to the inevitable growing apart, four close-knit couples in Texas came up with a clever way to live together while maintaining their independence. They've built themselves four tiny houses all in a row, each within a stone’s throw of the next. Because nothing says friends forever like signing a deed together, eight great pals living in the Austin area purchased ten acres of land outside the city limits, near the Llano River, for what they dubbed the “Llano Exit Strategy.” It’s not hard to see why the couples chose the Llano River as the site of their ideal idyll. Filmmaker Retrospective: The Surrealistic Cinema of Satoshi Kon « Taste of Cinema - Movie Reviews and Classic Movie Lists.

The late Satoshi Kon was amongst the foremost prominent Japanese animators, whose works transcended the world of anime and manga, thus creating a modern division of the genre, which chiefly addressed to a mature audience. 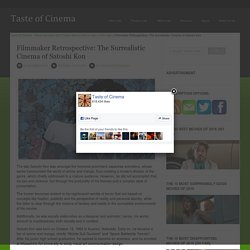 However, he did not accomplish that via sex and violence, but through the profundity of his themes and a complex style of presentation. The former becomes evident in his nightmarish worlds of terror that are based on concepts like fixation, publicity and the perspective of reality and personal identity, while the latter is clear through the mixture of fantasy and reality in the surrealistic environments of his movies. Additionally, he was equally elaborative as a designer and animator; hence, his works amount to masterpieces, both visually and in content. Satoshi Kon was born on October 12, 1963 in Kushiro, Hokkaido. Early on, he became a fan of anime and manga, chiefly “Mobile Suit Gundam” and “Space Battleship Yamato”.

The 12 Greatest World War II Movies of All Time. The second of the great wars brought many things; pain, anger, anguish, separation being one of those. 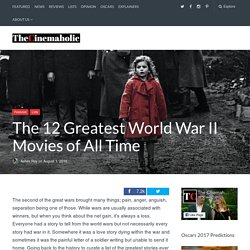 While wars are usually associated with winners, but when you think about the net gain, it’s always a loss. Everyone had a story to tell from the world wars but not necessarily every story had war in it. Somewhere it was a love story dying within the war and sometimes it was the painful letter of a soldier writing but unable to send it home. Going back to the history to curate a list of the greatest stories ever told during the WWII, opened few scars for us but for most of the time, it was those stories which emphatically celebrated the feeling that made us what we actually were: Humans. Perhaps you won’t find a ‘Guns of Navarone’ or a ‘Where Eagles Dare’ mentioned here but instead what we have found from the pages of history, intertwined with fiction, are the greatest stories told during the great war. 12. 11. 10. 9. 8. 7. 6. 5. 4. 3. 2. 1. Highbrow. Highbrow. Pride prejudice.