The Military Industrial Complex Unicorn – Former NSA Chief Raises $32.5 Million for Startup Company. Former head of the NSA, Keith Alexander, has been a busy guy since he left government. 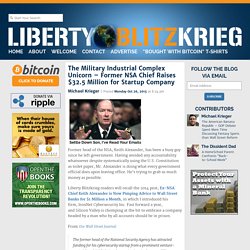 Having avoided any accountability whatsoever despite systematically using the U.S. Constitution as toilet paper, Mr. Alexander is doing what every government official does upon leaving office. He’s trying to grab as much money as possible. Liberty Blitzkrieg readers will recall the 2014 post, Ex-NSA Chief Keith Alexander is Now Pimping Advice to Wall Street Banks for $1 Million a Month, in which I introduced his firm, IronNet Cybersecurity Inc. From the Wall Street Journal: The former head of the National Security Agency has attracted funding for his cybersecurity startup from a prominent venture-capital firm, highlighting the continuing ties between Silicon Valley and Washington despite recent tensions. Banana Republic justice. 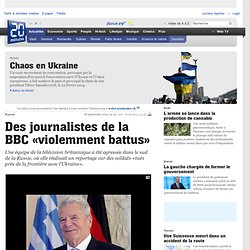 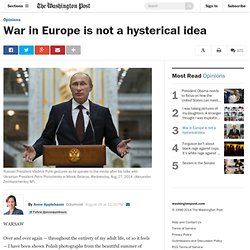 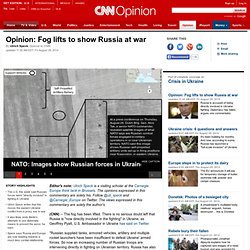 Gen. Nico Tak, a senior NATO commander, revealed satellite images of what NATO says are Russian combat forces engaged in military operations in or near Ukrainian territory. Ukraine warns of 'full-scale war' over Russia crisis. Your video will begin momentarily. 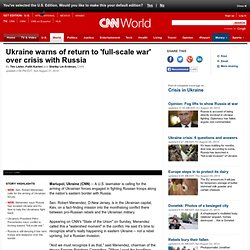 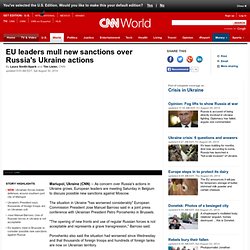 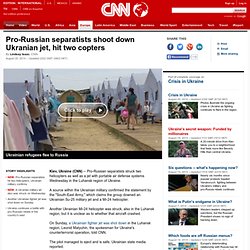 A source within the Ukrainian military confirmed the statement by the "South-East Army," which claims the group downed an Ukrainian Su-25 military jet and a Mi-24 helicopter. Another Ukrainian Mi-24 helicopter was struck, also in the Luhansk region, but it is unclear as to whether that aircraft crashed. On Sunday, a Ukrainian fighter jet was shot down in the Luhansk region, Leonid Matyuhin, the spokesman for Ukraine's counterterrorist operation, told CNN. Ukrainian soldiers gather close to Luhansk, eastern Ukraine, on Wednesday, August 20. Possible US Interferance in Ukrain. Nazi highjack of Euromaidan. Leaks and hacks. Swedish Neo-Nazis. Putin's powerplay. Crimea and geostrategy. US financing the coup. In Ukraine, fascists, oligarchs and western expansion are at the heart of the crisis.

We've been here before. 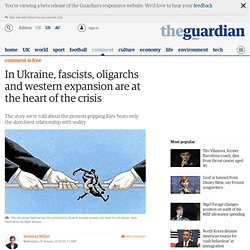 For the past couple of months street protests in Ukraine have been played out through the western media according to a well-rehearsed script. Pro-democracy campaigners are battling an authoritarian government. The demonstrators are demanding the right to be part of the European Union. But Russia's president Vladimir Putin has vetoed their chance of freedom and prosperity. It's a story we've heard in one form or another again and again – not least in Ukraine's western-backed Orange revolution a decade ago. So in the week that the liberation of Auschwitz by the Red Army was commemorated as Holocaust Memorial Day, supporters of those who helped carry out the genocide are hailed by western politicians on the streets of Ukraine. Is the U.S. Backing Neo-Nazis in Ukraine?

February 24, 2014 | Like this article? Join our email list: Stay up to date with the latest headlines via email. WikiLeaksParty - Is the U.S. Backing Neo-Nazis in Ukraine? Ukraine Crisis - What You're Not Being Told. Cold War Redux in Ukraine? DN! A New Cold War? Ukraine Violence Escalates, Leaked Tape Suggests U.S. Was Plotting Coup. JUAN GONZÁLEZ: A short-lived truce has broken down in Ukraine as street battles have erupted between anti-government protesters and police. 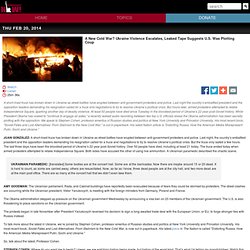 Last night, the country’s embattled president and the opposition leaders demanding his resignation called for a truce and negotiations to try to resolve Ukraine’s political crisis. But the truce only lasted a few hours. The last three days have been the bloodiest period of Ukraine’s 22-year post-Soviet history. Ukraine Neo-Nazi Party Threatens Russia with Nukes: “We’ll Regain our Nuclear Status in 6 Months”

Calls in Kiev to ‘regain nuclear status in six months’ Unable to resolve tensions with the largely pro-Russian autonomous region of Crimea, Kiev is bombarding Moscow with accusations and warnings. 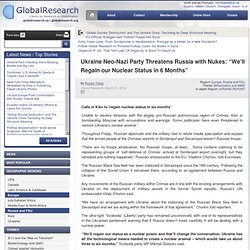 Some politicians have even threatened to restock Ukraine’s nuclear arsenal. Roundtable: As Crimea Threatens Secession, Does East-West Split Hasten Ukraine’s Political Divide? This is a rush transcript. Copy may not be in its final form. JUAN GONZÁLEZ: The pro-Russian Crimean Parliament has voted to hold a referendum on splitting off from Ukraine and joining Russia. But the vote’s legitimacy has been called into question after the installation of a pro-Russian government in Crimea just last week.

Canadian Photojournalist Captures Quiet Moments Amid the Conflict in Ukraine. A dog serves as a diversion for Ukrainian soldiers during a three-hour standoff with Russian troops at a military base in Crimea. Two weeks into the crisis in Ukraine, tension between Russian and Ukrainian soldiers continues to build. Russian President Vladimir Putin insisted in a televised address Tuesday that his decision to send 16,000 Russian troops to the Crimean region of Ukraine would not result in an international war. Russia and Crimea, he said, were brothers in arms.

My Blog. By Robert Fitzwilson of The Portola Group March 9 (King World News) - Investors Need To Stay Focused With Ukraine Crisis Unfolding Feuds are as old as mankind. In ancient times, there were the Blues and the Greens in Constantinople during the reign of Justinian I. World Heavyweight Boxing Champ Vitali Klitschko is Leading the Opposition Party in Ukraine. Dear Ukrainians! Today is a crucial day. Bloodshed continues. Authorities resort to bloody provocations in plain view of the world. Armed criminals were unleashed to beat people to show that there is some conflict among people. But these plans are doomed! - Urgent Appeal of Vitali Klitschko, February 20th, 2014 There is a short list of people who demonstrate a high level of athletic perfection and intellectual and social prowess. While remaining active as a professional boxer, the dominant heavyweight, and Ph.D., has been a political activist for the past decade. This December, when his native country started to look like it might slip into civil war, the 42-year old Klitschko announced he would vacate his title to focus on becoming the next president.

Still, on February 18th, at the end the most violent day, he appeared again to lead in Independence Square after fierce fighting left dozens of people dead and encouraged demonstrators to hold their ground. 15 terrifying images which show that Kiev is a real warzone. International Law on Russia's Ukraine Intervention. Russian forces have seized control of Crimea and reportedly are digging trenches in the land bridge that connects Crimea with the rest of Ukraine. Is this a flagrant violation of international law regulating the use of force, or does Russia have some credible justification for what it’s done?

Bottom Line Up Front (as DOD would say): It appears to be an unjustifiable armed attack on Ukraine, which means that under international law, Ukraine may use force in self-defense against Russia. Here’s the analysis, broken down into steps. First, Article 2(4) of the U.N. Charter prohibits states from engaging in any threats or uses of force against other states. Second, even if one state undertakes a use of force against another state, most states and scholars believe that a use of force alone may not trigger the harmed state’s right of self-defense. Third, if this otherwise would constitute an armed attack, does Russia have any international law justification for what it has done? DN! A Coup or a Revolution? Ukraine Seeks Arrest of Ousted President Following Deadly Street Protests.

AMY GOODMAN: Ukraine is in a state of crisis two days after the country’s democratically elected president was ousted following months of street protests that left at least 82 people dead. On Saturday, Ukraine’s Parliament voted to remove President Viktor Yanukovych, a move Yanukovych described as a coup. VIKTOR YANUKOVYCH: [translated] I am absolutely confident that this is an example, which our country and the whole world has seen, an example of a coup. I’m not going to leave Ukraine or go anywhere. I’m not going to resign. I’m a legitimately elected president. AMY GOODMAN: Viktor Yanukovych speaking Saturday. Meanwhile, Europe has embraced the new government. OLEKSANDR TURCHYNOV: [translated] Another priority is returning to the European integration course, the fight for which Maidan started with.

«Pas un centimètre de son territoire» à la Russie. The Ukraine crisis: John Kerry and Nato must calm down and back off. Russia–Ukraine relations. Ukraine: One "Regime Change" Too Many? Ukrainians, take it from a Bosnian: the EU flag is just a rag in the wind. The Rebirth Of American Nazism. Alarming trend in Ukraine: Historic monuments toppled, Nazi symbols spread (PHOTOS, VIDEO) Here's What Is Going To Happen With Ukraine. Faschisten gegen Europa - konkret - das linke Magazin. Russia Today Anchor Speaks Out Against Invasion Of Ukraine: 'What Russia Did Is Wrong' RT America's Liz Wahl resigns live on air.

"It actually makes me feel sick that I worked there," Wahl told The Daily Beast exclusively. – aroman

She's very courageous, I think it takes "guts" to do that live! – topoletta

Western Looting Of Ukraine Has Begun. Anonymous Ukrainian Hacks Ukrainian Fascists' Mail and Exposes the Nazi Network. Ukraine, Through the US Looking Glass. U.S. Should Not Meddle in Ukraine. Ukrainian Neo-Nazis Declare that Power Comes Out of the Barrels of their Guns. Ukraine crisis is about Great Power oil, gas pipeline rivalry. Playing the Energy Card in Crimea.