Introduction to Linux (LFS101) - Linux Foundation - Training. Must-Know Linux Commands For New Users - Linux.com. One of the beauties of Linux-based systems is that you can manage your entire system right from the terminal using the command line. 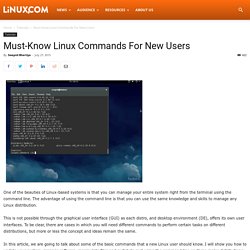 The advantage of using the command line is that you can use the same knowledge and skills to manage any Linux distribution. This is not possible through the graphical user interface (GUI) as each distro, and desktop environment (DE), offers its own user interfaces. To be clear, there are cases in which you will need different commands to perform certain tasks on different distributions, but more or less the concept and ideas remain the same.

In this article, we are going to talk about some of the basic commands that a new Linux user should know. I will show you how to update your system, manage software, manipulate files and switch to root using the command line on three major distributions: Ubuntu (which also includes its flavors and derivatives, and Debian), openSUSE and Fedora. Let’s get started! 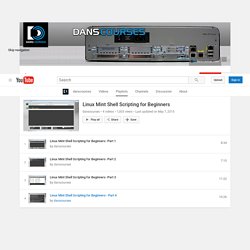 Working... ► Play all Linux Mint Shell Scripting for Beginners danscourses4 videos1,003 viewsLast updated on May 7, 2015 Play all Sign in to YouTube Sign in History. Tips and Tricks for Linux Mint after Installation [Mint 13 and 14 - Cinnamon Edition] Linux Mint is one of the top free operating systems widely used in the world and currently receives the highest hits at DistroWatch. 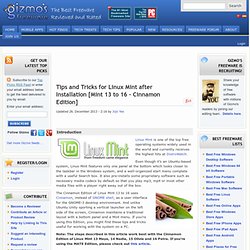 Even though it's an Ubuntu-based system, Linux Mint features only one panel at the bottom which looks closer to the taskbar in the Windows system, and a well-organized start menu complete with a useful Search box. It also pre-installs some proprietary software such as necessary media codecs by default so that you play mp3, mp4 or most other media files with a player right away out of the box. The Cinnamon Edition of Linux Mint 13 to 16 uses Cinnamon, instead of GNOME shell, as a user interface for the GNOME-3 desktop environment. And unlike Ubuntu Unity sporting a vertical launcher on the left side of the screen, Cinnamon maintains a traditional layout with a bottom panel and a Mint menu.

Wine (software) Wine is a free and open source software application that aims to allow applications designed for Microsoft Windows to run on Unix-like operating systems. 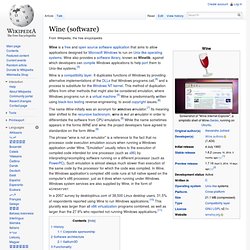 Wine also provides a software library, known as Winelib, against which developers can compile Windows applications to help port them to Unix-like systems.[3] The name Wine initially was an acronym for windows emulator.[7] Its meaning later shifted to the recursive backronym, wine is not an emulator in order to differentiate the software from CPU emulators.[8] While the name sometimes appears in the forms WINE and wine, the project developers have agreed to standardize on the form Wine.[9] The phrase "wine is not an emulator" is a reference to the fact that no processor code execution emulation occurs when running a Windows application under Wine.

"Emulation" usually refers to the execution of compiled code intended for one processor (such as x86) by interpreting/recompiling software running on a different processor (such as PowerPC). Bash (Unix shell) Brian Fox began coding Bash on January 10, 1988[11] after Richard Stallman became dissatisfied with the lack of progress being made by a prior developer.[3] Stallman and the Free Software Foundation (FSF) considered a free shell that could run existing sh scripts so strategic to a completely free system built from BSD and GNU code that this was one of the few projects they funded themselves, with Fox undertaking the work as an employee of FSF.[3][12] Fox released Bash as a beta, version .99, on June 7, 1989[5] and remained the primary maintainer until sometime between mid-1992[13] and mid-1994,[14] when he was laid off from FSF[15] and his responsibility was transitioned to another early contributor, Chet Ramey.[16][17][18] Bash supports here documents just as the Bourne shell always has. 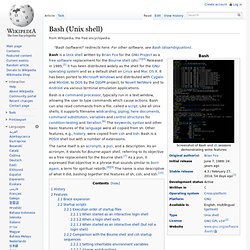