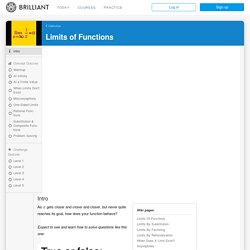 Expect to see and learn how to solve questions like this one: (Be careful, most people who try this problem don’t get it right and/or get it right, but without understanding the full picture.) Limits are used to describe the most extreme cases of a function’s behavior. They also allow you to use the “smoothness” of a function as a tool for understanding how a function behaves around strange singularities. Being able to solve limit problems requires a combination of both knowing the essential strategies for simplifying functions and also understanding the rules for when limits do and don’t exist. In other cases, such as the there is no real, numerical limit as is not a real number, however, conceptually, we say that since, in this case, the left-hand and right-hand limits both equal. Exercises - Continuity. Given the following function, $$f(x) = \left\{ \begin{array}{ccc} x^2-3x & \textrm{ if } & x \lt -1\\\\ 2x-3 & \textrm{ if } & -1 \le x \lt 1\\\\ 2 & \textrm{ if } & x = 1\\\\ \displaystyle{\frac{1}{x-2}} & \textrm{ if } & x \ge 1\\\\ \end{array} \right.$$ Evaluate the following expressions. 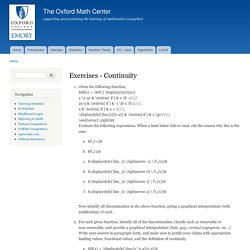 When a limit below fails to exist, cite the reason why this is the case. The Oxford Math Center. Consider the graph of the function $\displaystyle{f(x)=\frac{1}{x}}$ shown below. 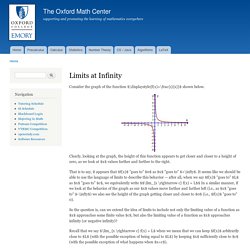 Clearly, looking at the graph, the height of this function appears to get closer and closer to a height of zero, as we look at $x$ values farther and farther to the right. That is to say, it appears that $f(x)$ "goes to" $0$ as $x$ "goes to" $+\infty$. The Oxford Math Center. 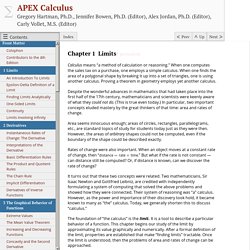 When one computes the sales tax on a purchase, one employs a simple calculus. When one finds the area of a polygonal shape by breaking it up into a set of triangles, one is using another calculus. Proving a theorem in geometry employs yet another calculus. Despite the wonderful advances in mathematics that had taken place into the first half of the 17th century, mathematicians and scientists were keenly aware of what they could not do. (This is true even today.) Area seems innocuous enough; areas of circles, rectangles, parallelograms, etc., are standard topics of study for students today just as they were then. Rates of change were also important. It turns out that these two concepts were related. The foundation of “the calculus” is the limit. Chapter Summary In this chapter we: Why? Later, we will want to add up an infinite list of numbers. These are just two quick examples of why we are interested in limits. One-sided limits from graphs. One-sided limits from graphs (practice) 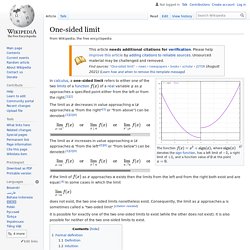 Calculus I - Limits. Show Mobile NoticeShow All NotesHide All Notes You appear to be on a device with a "narrow" screen width (i.e. you are probably on a mobile phone). 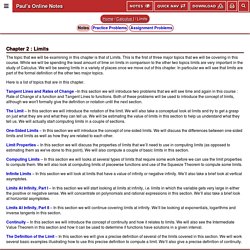 Due to the nature of the mathematics on this site it is best views in landscape mode. If your device is not in landscape mode many of the equations will run off the side of your device (should be able to scroll to see them) and some of the menu items will be cut off due to the narrow screen width. The topic that we will be examining in this chapter is that of Limits. This is the first of three major topics that we will be covering in this course. Here is a list of topics that are in this chapter. Tangent Lines and Rates of Change –In this section we will introduce two problems that we will see time and again in this course : Rate of Change of a function and Tangent Lines to functions.