Leela Chess Zero. Learn chess - by playing! Rise of the machines: new book shows how revolutionary AlphaZero is. The eye-catching victory of AlphaZero, the artificial-intelligence program that taught itself to play chess, over the No 1 computer engine Stockfish, has evoked comparisons with human legends. 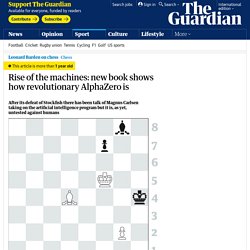 Garry Kasparov has written a foreword for a newly published book in which he says AlphaZero’s “dynamic, sacrificial style … mirrored my own … AlphaZero prefers piece activity and attacking chances”. He also compares it to “Alexander Alekhine, with dazzling sacrifices and a fondness for unbalanced positions”. The book is Game Changer by Matthew Sadler and Natasha Regan (New in Chess, £19.95) which features an in-depth analysis by Sadler, a grandmaster and former British champion, of recurrent motifs in AlphaZero’s style which can be adapted by human players. Among the many themes which Sadler identifies, AZ likes Harry the h pawn to spearhead its long-term attacks with an advance to h6 which entombs a rook or bishop at h8. On the face of it, no. Subscribe to read. Artificial intelligence, the coming ‘force’ : The Tribune India. Lt Gen Sanjiv Langer (retd) Lt Gen Sanjiv Langer (retd)Former Deputy Chief of Defence Staff There is a small troop of horses galloping in cyberspace. 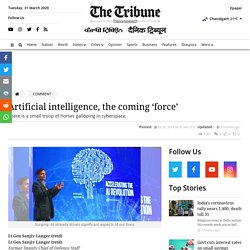 It is led by a determined rider who is the proverbial two-headed Captain. With one brain that could spawn the dislocation of humanity, and the other that could deliver unimagined succour and support to humankind. Recent maturing and manifestation of AI need to be viewed in their wider context of applicability. Viswanathan Anand - AI engine AlphaZero's win will 'scramble' chess world. 15 Dec, 2017Susan Ninan The future of chess could be right here. 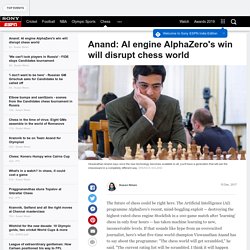 The Artificial Intelligence (AI) programme AlphaZero's recent, mind-boggling exploit -- destroying the highest-rated chess engine Stockfish in a 100-game match after 'learning' chess in only four hours -- has taken machine learning to new, inconceivable levels. If that sounds like hype from an overexcited journalist, here's what five-time world champion Viswanathan Anand has to say about the programme: "The chess world will get scrambled," he said. "The current rating list will be scrambled. I think it will happen gradually. " "It can definitely be a world-changing tool. " Stockfish is the go-to preparation tool for top players and being destroyed by the AlphaZero algorithm -- which has no domain knowledge barring the rules of the game -- is, to put it mildly, beyond unbelievable. AlphaZero has been devised by the Google-owned company DeepMind.

How AlphaZero has rewritten the rules of game play on its own. David Silver invented something that might be more inventive than he is. 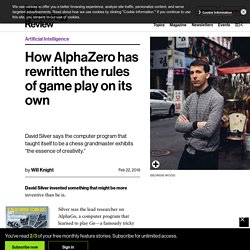 Silver was the lead researcher on AlphaGo, a computer program that learned to play Go—a famously tricky game that exploits human intuition rather than clear rules of play—by studying games played by humans. Silver’s latest creation, AlphaZero, learns to play board games including Go, chess, and Shogi by practicing against itself. Through millions of practice games, AlphaZero discovers strategies that it took humans millennia to develop. So could AI one day solve problems that human minds never could? I spoke to Silver at his London office at DeepMind, now owned by Alphabet. In one famous game against possibly the best Go player ever, AlphaGo made a brilliant move that human observers initially thought was a mistake. “Move 37,” as it became known, surprised everyone, including the Go community and us, its makers. Don't try and beat AI, merge with it says chess champ Garry Kasparov. Garry Kasparov, a former Soviet world chess champion and one of the greatest players of all time, has changed his tune about AI since he was beaten by IBM’s Deep Blue. 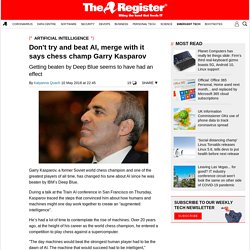 During a talk at the Train AI conference in San Francisco on Thursday, Kasparov traced the steps that convinced him about how humans and machines might one day work together to create an “augmented intelligence”. He’s had a lot of time to contemplate the rise of machines. Magnus Carlsen Was Defeated, But the Draw Remains Dominant in Chess. One by one, the pieces came off the chess board, until only the two kings and a lone bishop remained. 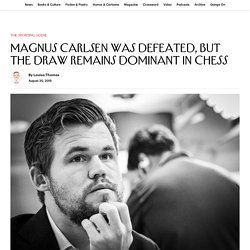 It was a draw, but Magnus Carlsen, the world champion, shook Ding Liren’s hand with a look of resignation. He had played eight rounds in the Sinquefield Cup, in St. Louis, one of the biggest tournaments of the year, and had come away with eight draws. He clearly wanted a decisive result in this one: his preparation was deep, and his opening was daring. Instead of simply developing his pieces, tucking his king safely away and only then building an attack, he had quickly and persistently tried to create imbalances wherever he could. Category:Chess engines. Stockfish (chess)

Open source chess engine Stockfish is derived from Glaurung, an open-source engine by Romstad released in 2004. 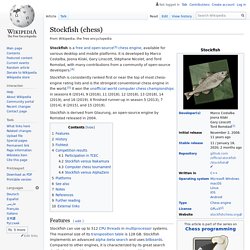 Stockfish supports Chess960, which is one of the features that was inherited from Glaurung. Around 2011, Romstad decided to abandon his involvement with Stockfish and preferred to spend his time on his new iOS chess app. Changes to game-playing code are accepted or rejected based on results of playing of tens of thousands of games on the framework against an older "reference" version of the program, using sequential probability ratio testing. Tests on the framework are verified using the chi-squared test, and only if the results are statistically significant are they deemed reliable and used to revise the software code.

Ever since chess.com hosted its first computer chess championship in 2018, Stockfish has been the most successful engine. List of free and open-source software packages. Improvement - Chess Daily News. Chess problem. A chess problem, also called a chess composition, is a puzzle set by somebody using chess pieces on a chess board, that presents the solver with a particular task to be achieved. 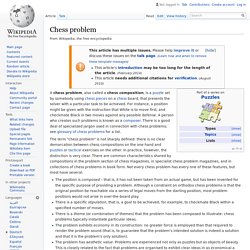 For instance, a position might be given with the instruction that White is to move first, and checkmate Black in two moves against any possible defense. A person who creates such problems is known as a composer. There is a good deal of specialized jargon used in connection with chess problems; see glossary of chess problems for a list. The term "chess problem" is not sharply defined: there is no clear demarcation between chess compositions on the one hand and puzzles or tactical exercises on the other. Chess Puzzles - GameKnot. Bobby Fischer Teaches Chess : Mission Studios : Free Streaming. Published by Interplay Entertainment Corp. 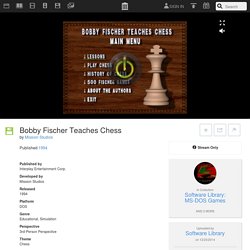