Block or unblock a phone number - Phone app Help. Automatic Call Recorder. Record any phone call you want and choose which calls you want to save. 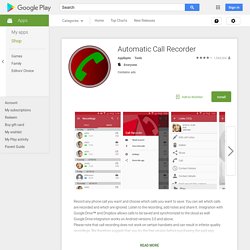 You can set which calls are recorded and which are ignored. Listen to the recording, add notes and share it. Integration with Google Drive™ and Dropbox allows calls to be saved and synchronized to the cloud as well. How to Record a Phone Call on Android. There may or may not come a time in your life when you need to record a phone call. 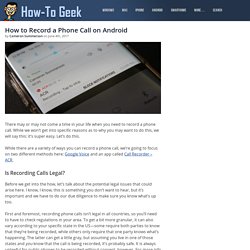 While we won’t get into specific reasons as to why you may want to do this, we will say this: it’s super easy. Let’s do this. While there are a variety of ways you can record a phone call, we’re going to focus on two different methods here: Google Voice and an app called Call Recorder – ACR. Is Recording Calls Legal? Before we get into the how, let’s talk about the potential legal issues that could arise here. First and foremost, recording phone calls isn’t legal in all countries, so you’ll need to have to check regulations in your area. How to Record Phone Calls with Google Voice If you’re a Google Voice user, this is super easy.

Before you can actually record a call, you have to first enable the call recording feature. First, fire up Google Voice and open the Settings menu by sliding in the menu from the left side and choosing “Settings.” On the web, click on “Calls.” Sign in with your phone instead of a password - Android - Google Account Help. App Android su Google Play. “Brilliant and stunning . . . an absolute must read.” – GILLIAN FLYNN “A well-constructed package of dynamite.” – STEPHEN KING A most anticipated book by The New York Times • USA Today • Entertainment Weekly • Marie Claire • Elle • Harper's Bazaar • Bustle • Newsweek • New York Post • Esquire • Real Simple • The Sunday Times • The Guardian Exploring the psychological dynamics of the relationship between a precocious yet naïve teenage girl and her magnetic and manipulative teacher, a brilliant, all-consuming read that marks the explosive debut of an extraordinary new writer. 2000. 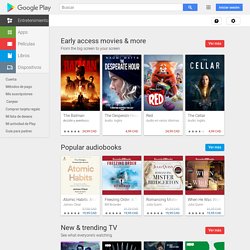 Bright, ambitious, and yearning for adulthood, fifteen-year-old Vanessa Wye becomes entangled in an affair with Jacob Strane, her magnetic and guileful forty-two-year-old English teacher. Android Apps - Free Downloads and Reviews. 6 easy ways to keep your Android phone secure. Nope, you're not being paranoid. 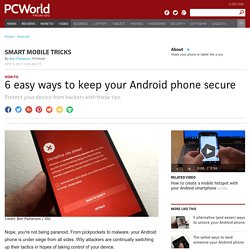 From pickpockets to malware, your Android phone is under siege from all sides. Wily attackers are continually switching up their tactics in hopes of taking control of your device. Let's acknowledge that there's no foolproof way to protect your Android device from thieves and hackers. Indeed, as a wise technology guru once told me, if a sophisticated crook decides to target your phone, good luck trying to stop them. That said, there are plenty of ways to keep your Android handset safe from the most common security threats, all with a minimum of effort. 6 ways to maximize the Android phone dialer. Whether you’re trying to avoid telemarketers or you want to share a crazy voicemail you just received, the “stock” phone dialer on your Android phone has some pretty clever tricks up its sleeves. 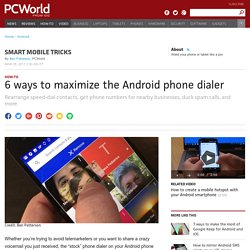 Not only can the Android phone dialer warn you of spam callers and share a voicemail message via Gmail, Google Drive, or Dropbox, it can also suggest phone numbers based on your location, help you organize or delete shortcuts to “favorite” callers, let you customize your own “quick” text responses for declined callers, and more.

Note: I tested these tips on a Nexus 5X running on Android 7.1.2, using Project Fi as my carrier. The calling features on your phone may vary depending on the make, model, and carrier of your device. Rearrange your ‘frequent’ callers. 9 nifty Gboard for Android tricks you need to try. The only problem with Google's Gboard keyboard for Android is that I'm totally hooked on its best features. 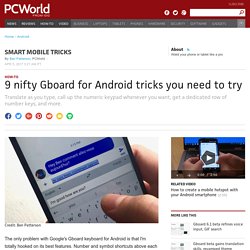 Number and symbol shortcuts above each key? Gotta have 'em. One-handed mode? How to tell if your Android phone has spyware. A reader whom I won’t name worries that his cousin watches what he does on his Android phone. 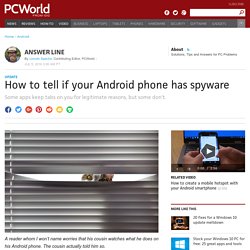 The cousin actually told him so. It’s possible that your cousin is just messing with your head. Ask for proof—such as texts you’ve sent and received. On the other hand, they may actually be spying on your phone. There are a surprising number of Android apps that can do just that. [Have a tech question? But first, let me clarify one thing: No one is tracking you via your phone’s IP address. In order to track your phone, someone would need to install a spying app onto it. And then there are spyware apps that don’t pretend to be anything else; tools such as GPS Phone Tracker. Why doesn’t Google block these apps? Believe it or not, some people put these apps in their phones willingly. Personally, I prefer to just trust my wife.