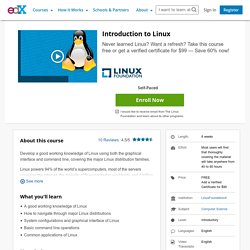 Linux powers 94% of the world’s supercomputers, most of the servers powering the Internet, the majority of financial trades worldwide and a billion Android devices. In short, Linux is everywhere. It appears in many different architectures, from mainframes to server to desktop to mobile and on a staggeringly wide variety of hardware. Moreover, 97 percent of hiring managers reported that they will prioritize hiring Linux talent relative to other skills areas in the next six months, and 44 percent of hiring managers saying they’re more likely to hire a candidate with Linux certification. About Inservice. About Inservice Inservice is the official blog of ASCD. 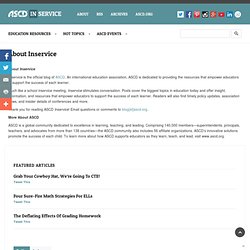 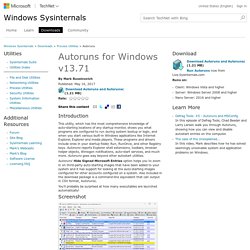 These programs and drivers include ones in your startup folder, Run, RunOnce, and other Registry keys. Autoruns reports Explorer shell extensions, toolbars, browser helper objects, Winlogon notifications, auto-start services, and much more. Windows Performance Jump Start. Microsoft Certified Community Connection. Windows Internals Book. Windows Internals, Part 1, 6th Edition - Search. Hackathon Winners. How to Crack a Wi-Fi Network. 1.Back Track Today we’re going to run down, step-by-step, how to crack a Wi-Fi network with WEP security turned on. Dozens of tutorials on how to crack WEP are already all over the internet using this method. About - Docs@Liveweave. Well, for starters…it is really easy to use. 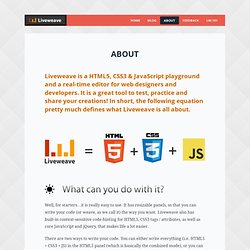 It has resizable panels, so that you can write your code (or weave, as we call it) the way you want. Liveweave also has built-in context-sensitive code-hinting for HTML5, CSS3 tags / attributes, as well as core JavaScript and jQuery, that makes life a lot easier. There are two ways to write your code. You can either write everything (i.e. HTML5 + CSS3 + JS) in the HTML5 panel (which is basically the combined mode), or you can separately write them in their own respective panels. In short, you can… 15 Web Alternatives to Popular Desktop Software. Web applications for business have come a long way. 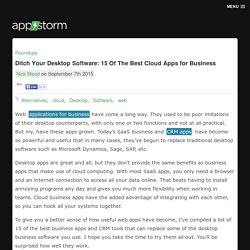 They used to be poor imitations of their desktop counterparts, with only one or two functions and not at all practical. But my, have these apps grown. Today’s SaaS business and CRM apps have become so powerful and useful that in many cases, they’ve begun to replace traditional desktop software such as Microsoft Dynamics, Sage, SAP, etc. Desktop apps are great and all, but they don’t provide the same benefits as business apps that make use of cloud computing. With most SaaS apps, you only need a browser and an internet connection to access all your data online. Open source is changing the world: join the movement. A community-powered conversation about how CIOs are driving the future of business.

Infoactive. SyncForce SurveyWorld. Customer Interaction Management. Plannen en prijzen van SurveyMonkey. The code-savvy web design tool. HTML5 Tutorial for Beginners - HTML5 Training. Foundation for Open Access Statistics - promoting free software, open access publishing, and reproducible research in statistics. Curah! Use Windows Easy Transfer over a network to migrate from XP to Windows 8. If you are currently running Windows XP and are planning to get a new Windows 8 computer before Microsoft ends support for Windows XP, then you may be wondering how you will go about migrating your data and settings from Windows XP to Windows 8. 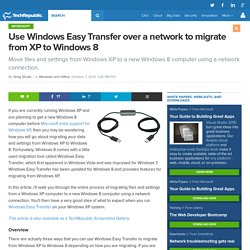 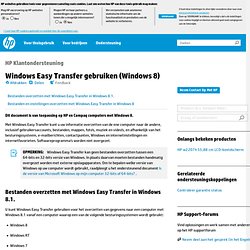 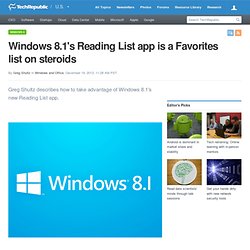 Some of the improvements in Windows 8.1 have made using the modern apps more appealing. I like the new Snap feature, which allows you to have more than two modern apps open on the screen at one time, and I discovered a way to have two Internet Explorer tabs open on the screen and position them side-by-side. I recently came across a new app added to Windows 8.1 called Reading List that is a very nice addition to Microsoft's collection of free apps. Reading List allows you to keep track of all the content you encounter in your apps that you want to be able find again or read at a later date; in this respect, the app works like the Favorites list. However, Reading List goes beyond the Favorites list in that it organizes the content in chronological order and in categories and then displays the titles and the content as tiles with images. 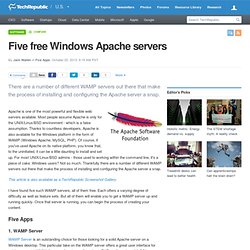 Apache is one of the most powerful and flexible web servers available. Most people assume Apache is only for the UNIX/Linux/BSD environment - which is a false assumption. Thanks to countless developers, Apache is also available for the Windows platform in the form of WAMP (Windows Apache, MySQL, PHP). Microsoft starts de-emphasizing the Desktop with Surface 2.

A number of us who've been using the ARM-based version of Microsoft's Surface (and the underlying Windows RT operating system) have been wondering how long it might take Microsoft to remove the Desktop completely from the platform. 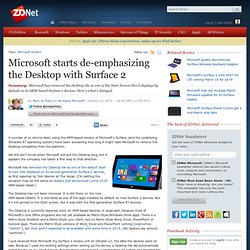 We still don't know when Microsoft will pull the Desktop plug, but it appears the company has taken a first step in that direction. Microsoft has removed the Desktop tile as one of the default Start Screen tiles displayed on its second-generation Surface 2 devices, as first reported by Tom Warren at The Verge. (I'm betting the situation may be the same on Nokia's just-announced Lumia 2520 ARM-based tablet.) The Desktop has not been removed. It is still there on the new ARM-based tablets. The Desktop is currently required, even on ARM-based devices, in large part, because most of Microsoft's core Office programs are not yet available as Metro-Style/Windows Store apps. Free ISO to USB - Free download and software reviews. Ubuntu. Virtual Machine (VM), Windows Virtual PC & Browserstack.