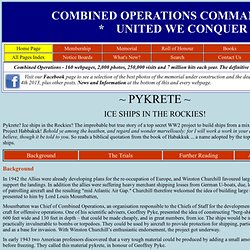 Ice ships in the Rockies? The improbable but true story of a top secret WW2 project to build ships from a mixture of ice and sawdust. Project Habbakuk! Behold ye among the heathen, and regard and wonder marvellously: for I will work a work in your days, which ye will not believe, though it be told to you. Buddhist Economics: How to Stop Prioritizing Goods Over People and Consumption Over Creative Activity.

By Maria Popova “Work and leisure are complementary parts of the same living process and cannot be separated without destroying the joy of work and the bliss of leisure.” 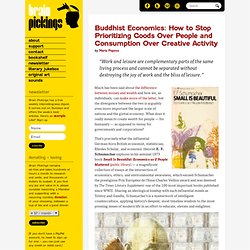 Much has been said about the difference between money and wealth and how we, as individuals, can make more of the latter, but the divergence between the two is arguably even more important the larger scale of nations and the global economy. What does it really mean to create wealth for people — for humanity — as opposed to money for governments and corporations? That’s precisely what the influential German-born British economist, statistician, Rhodes Scholar, and economic theorist E. F. One of the most compelling essays in the book, titled “Buddhist Economics,” applies spiritual principles and moral purpose to the question of wealth. How Enigma Machines Work. The underlying principle of an Enigma machine cipher is that of letter substitution, meaning that each letter of our plaintext (undeciphered message) is substituted by another letter. 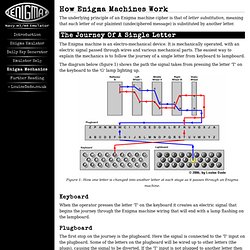 The Enigma machine is an electro-mechanical device. It is mechanically operated, with an electric signal passed through wires and various mechanical parts. 6.5  \  The Navajo Code Talkers. European genealogy FAQ. These FAQs represent some of the non-technical questions that we’ve been asked about our paper Ralph P, Coop G (2013) The Geography of Recent Genetic Ancestry across Europe. doi:10.1371/journal.pbio.1001555 PLOS biology there’s a synopsis of the paper here. 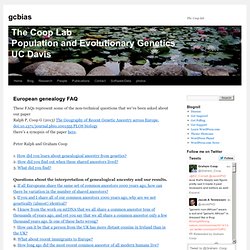 Peter Ralph and Graham Coop 1. How did you learn about genealogical ancestry from genetics? 2. The genetic imprint of Niall of the Nine Hostages - Science News. One thousand years ago this week, Brian Boru, High King of all Ireland, defeated Norse King Sitric Silkenbeard of Howth at the Battle of Clontarf. 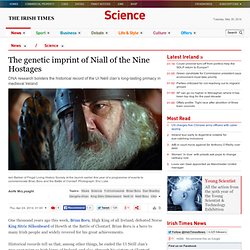 Brian Boru is a hero to many Irish people and widely revered for his great achievements. Historical records tell us that, among other things, he ended the Uí Néill clan’s 500-year reign as high kings of Ireland, and also, through his victory at Clontarf, kicked the Vikings out of Ireland. However, we have an independent record of the past in our genes. Henges: Stonehenge, Woodhenge, Avebury & Stanton Drew. Project Habakkuk. Project Habakkuk or Habbakuk (spelling varies; see below) was a plan by the British in World War II to construct an aircraft carrier out of pykrete (a mixture of wood pulp and ice), for use against German U-boats in the mid-Atlantic, which were beyond the flight range of land-based planes at that time. 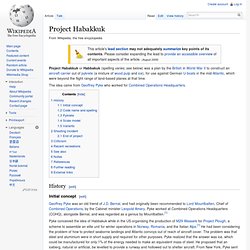 The idea came from Geoffrey Pyke who worked for Combined Operations Headquarters. History[edit] Initial concept[edit] Geoffrey Pyke was an old friend of J.D. Bernal, and had originally been recommended to Lord Mountbatten, Chief of Combined Operations, by the Cabinet minister Leopold Amery. InMoov. Silkworms Made to Spin Fluorescent Colored Silk. Building Pykrete (bulletproof ice) Pykrete. A slab of pykrete Pykrete is made of 14 percent sawdust and 86 percent water by weight. 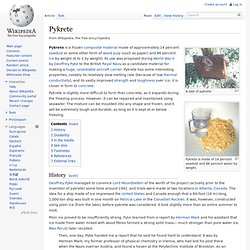 Pykrete is a frozen composite material made of approximately 14 percent sawdust or some other form of wood pulp (such as paper) and 86 percent ice by weight (6 to 1 by weight). Its use was proposed during World War II by Geoffrey Pyke to the British Royal Navy as a candidate material for making a huge, unsinkable aircraft carrier. Pykrete has some interesting properties, notably its relatively slow melting rate (because of low thermal conductivity), and its vastly improved strength and toughness over ice; it is closer in form to concrete. Pykrete is slightly more difficult to form than concrete, as it expands during the freezing process. History[edit] Plain ice proved to be insufficiently strong. Skara Brae. A 3D printer that uses printer paper. Liver-like cells. The exploding technology trend of 3D printing, which has already been used to manufacture everything from food to jewelry, has made its way into the realm of biomedical research, with one California company recently announcing that it had "bioprinted" 3D liver cells. 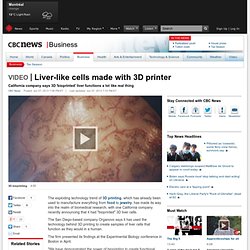 The San Diego-based company Organovo says it has used the technology behind 3D printing to create samples of liver cells that function as they would in a human. The firm presented its findings at the Experimental Biology conference in Boston in April. "We have demonstrated the power of bioprinting to create functional human tissue that replicates human biology better than what has come before," Organovo said in a news release. A still image from a simulation demonstrating how Organovo's bioprinter injects the 'bio ink' into a lattice to create a 3D cell structure that resembles real liver tissue.