Neuroscience. Positive psychology. Martin Seligman on positive psychology. Why do some people enjoy life and others don't? Propose a movement whose aim is to bottle happiness so it can be dispensed to one and all, saving humanity from a future of chronic misery, and you might expect at least a few people to roll their eyes. 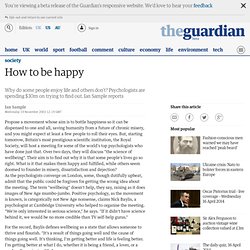 But, starting tomorrow, Britain's most prestigious scientific institution, the Royal Society, will host a meeting for some of the world's top psychologists who have done just that. Over two days, they will discuss "the science of wellbeing". Positive Psychology. Positive Psychology UK. Positive Psychology Center. Motivation Theory. Theories of Motivation. Author: Jim Riley Last updated: Sunday 23 September, 2012 There are a number of different views as to what motivates workers. 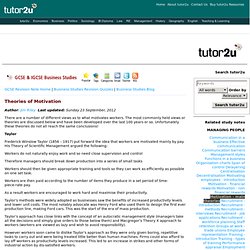 The most commonly held views or theories are discussed below and have been developed over the last 100 years or so. Unfortunately these theories do not all reach the same conclusions! Taylor Frederick Winslow Taylor (1856 – 1917) put forward the idea that workers are motivated mainly by pay. Workers do not naturally enjoy work and so need close supervision and control Therefore managers should break down production into a series of small tasks Workers should then be given appropriate training and tools so they can work as efficiently as possible on one set task. Workers are then paid according to the number of items they produce in a set period of time- piece-rate pay. As a result workers are encouraged to work hard and maximise their productivity. 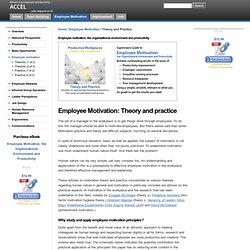 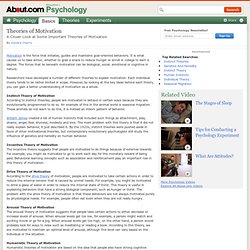 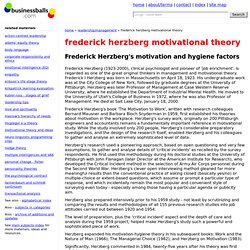 Frederick I Herzberg was born in Massachusetts on April 18, 1923. His undergraduate work was at the City College of New York, followed by graduate degrees at the University of Pittsburgh. Herzberg was later Professor of Management at Case Western Reserve University, where he established the Department of Industrial Mental Health. Employee motivation, motivational and inspirational quotes for sales and business staff. Home » leadership/management » motivational theory employee motivation theory - team building activities, workshops, inspirational quotes, and the power of positive experience Alignment of aims, purpose and values between staff, teams and organization is the most fundamental aspect of motivation. 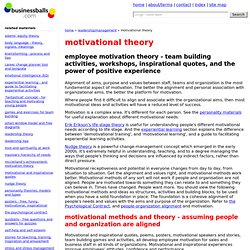 The better the alignment and personal association with organizational aims, the better the platform for motivation. Where people find it difficult to align and associate with the organizational aims, then most motivational ideas and activities will have a reduced level of success. Motivation is a complex area. Erik Erikson's life stage theory is useful for understanding people's different motivational needs according to life stage. Nudge theory is a powerful change-management concept which emerged in the early 2000s. What is Appreciative Inquiry? - The Appreciative Inquiry Commons. From A Positive Revolution in Change: Appreciative Inquiry by David L. 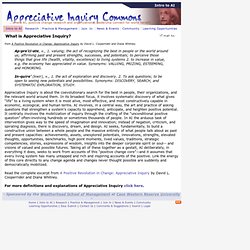 Cooperrider and Diana Whitney. Ap-pre’ci-ate, v., 1. valuing; the act of recognizing the best in people or the world around us; affirming past and present strengths, successes, and potentials; to perceive those things that give life (health, vitality, excellence) to living systems 2. to increase in value, e.g. the economy has appreciated in value.

Synonyms: VALUING, PRIZING, ESTEEMING, and HONORING.In-quire’ (kwir), v., 1. the act of exploration and discovery. 2. To ask questions; to be open to seeing new potentials and possibilities. Synonyms: DISCOVERY, SEARCH, and SYSTEMATIC EXPLORATION, STUDY. Appreciative Inquiry is about the coevolutionary search for the best in people, their organizations, and the relevant world around them. Read the complete excerpt from A Positive Revolution in Change: Appreciative Inquiry by David L. Appreciative Inquiry - Problem Solving from MindTools. Solving Problems by Looking at What's Going Right © iStockphoto/Yuri_Accurs Imagine that your organization's order book is full, and you're desperate to expand your business – but you just can't find the staff you need. 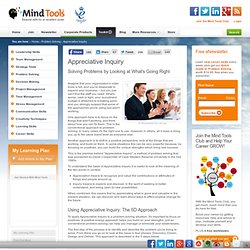 What's worse, cash is tight, your recruitment budget is stretched to breaking point, and you strongly suspect that some of the approaches you're using just aren't working. One approach here is to focus on the things that aren't working, and think about how you can fix them. This is the conventional approach to problem-solving.