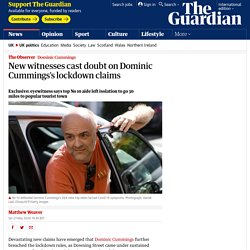 The new testimony suggests Cummings left the home where he was staying in Durham to visit a town 30 miles away on 12 April. He was allegedly spotted back in Durham on 19 April, days after he was photographed in London having recovered from the virus, suggesting that following his first trip across the country at the end of March he had made a second journey from the capital to north-east England. Dominic Cummings ignored coronavirus lockdown rules for SECOND time to visit parents. Dominic Cummings ignored coronavirus lockdown rules for a second time to visit his parents more than 250 miles away, the Sunday Mirror can reveal. 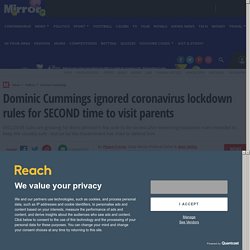 Boris Johnson’s top aide was spotted with his wife in Houghall Woods near the family’s Durham home two weeks after the first sighting. Fellow walkers said they were taken aback to see the Prime Minister’s senior official so far from London at the height of the lockdown on April 19. A neighbour, who was out for a walk at the famous local beauty spot, claimed Mr Cummings commented as he passed by: “Aren’t the bluebells lovely?”

: Dominic Cummings self-isolates after falling ill with Covid-19 symptoms. The Prime Minister has been in self-isolation in 11 Downing Street since last Friday Monday, 30th March 2020, 4:34 pm Updated Sign up to our daily newsletter The i newsletter cut through the noise A Downing Street spokesman said: "I can confirm that Dom is not in No10 today and he is self-isolating after developing symptoms over the weekend. 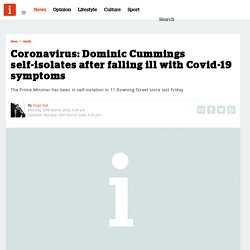 " On Tuesday the Cabinet will hold its first-ever entirely virtual meeting. Virus toll The daily press conferences from No 10, which are broadcast live on television, have been led by a number of different ministers in recent days, including Michael Gove, Alok Sharma, Robert Jenrick and Dominic Raab. A spokesman for the Prime Minister said: "He is chairing the daily meetings using video conference facilities, working from the Chancellor’s office, doing everything he needs to do to lead the coronavirus response. " All affected ministers have experienced only mild symptoms so far and have not had to stop work completely. 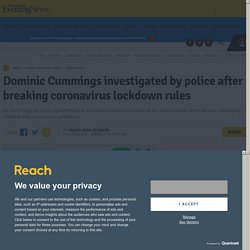 Mr Cummings was seen by witnesses at his parents home in Durham at the end of March, when he was supposedly isolating with coronavirus symptoms at his London home. The Prime Minister and senior cabinet ministers have repeatedly said that strict rules on movement is essential to slow the spread of the virus and to save lives. Mr Cummings started suffering from symptoms of coronavirus shortly after Mr Johnson, and was said to be self-isolating with his wife and young son for 14 days. Click for Sound The video will start in8Cancel Play now Video will play in Calls for Dominic Cummings to resign after reports he broke lockdown rules His wife, journalist Mary Wakefield, wrote about "emerging from quarantine" into the London lockdown. 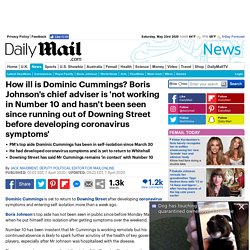 Boris Johnson's chief adviser is 'not working in Number 10 and hasn't been seen since running out of Downing Street before developing coronavirus symptoms' PM's top aide Dominic Cummings has been in self-isolation since March 30He had developed coronavirus symptoms and is yet to return to Whitehall Downing Street has said Mr Cummings remains 'in contact' with Number 10 By Jack Maidment, Deputy Political Editor For Mailonline. Dominic Cummings accused of hypocrisy as 'co-owner of a farm that took £235,000 in EU subsidies'  Downing Street's Brexit guru who has railed against the 'absurdity' of EU subsidies co-owns a farm which has received around £235,000 from the European Union, it has been revealed. 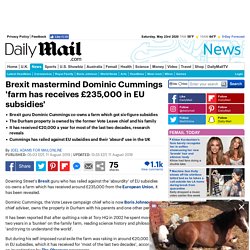 Dominic Cummings, the Vote Leave campaign chief who is now Boris Johnson's chief adviser, owns the property in Durham with his parents and one other person. It has been reported that after quitting a role at Tory HQ in 2002 he spent more than two years in a 'bunker' on the family farm, reading science history and philosophy 'and trying to understand the world'.

Brexit enforcer Cummings’ farm took €235,000 in EU handouts. Boris Johnson’s controversial enforcer, Dominic Cummings, an architect of Brexit and a fierce critic of Brussels, is co-owner of a farm that has received €250,000 (£235,000) in EU farming subsidies, the Observer can reveal. 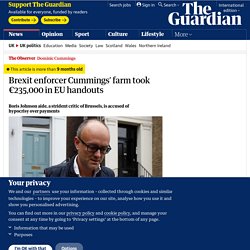 The revelation is a potential embarrassment for the mastermind behind Johnson’s push to leave the EU by 31 October.