Maurice Ravel. Ravel in 1925 According to SACEM, Ravel's estate had earned more royalties than that of any other French composer. 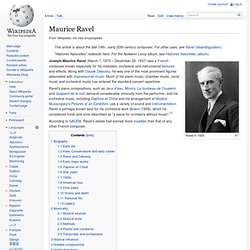 Biography[edit] Early life[edit] Birthplace of Maurice Ravel in Ciboure Ravel was born in the Basque town of Ciboure, France, near Biarritz, only 18 kilometers from the Spanish border, in 1875. Ravel was very fond of his mother, and her Basque-Spanish heritage was a strong influence on his life and music. Paris Conservatoire and early career[edit] Piano class of Charles de Bériot in 1895 with Ravel on the left Ravel’s parents encouraged his musical pursuits and sent him to the Conservatoire de Paris, first as a preparatory student and eventually as a piano major.

Ravel was not a "bohemian" and evidenced little of the typical trauma of adolescence. Ravel and Debussy[edit] The two musicians also appreciated much the same musical heritage and operated in the same artistic milieu, but they differed in terms of personality and their approach to music. Maurice Ravel-Bolero [FULL] Sergei Rachmaninoff. Sergei Rachmaninoff Sergei Vasilievich Rachmaninoff (Russian: Серге́й Васи́льевич Рахма́нинов;[1] Russian pronunciation: [sʲɪrˈɡʲej rɐxˈmanʲɪnəf]; 1 April [O.S. 20 March] 1873 – 28 March 1943)[2] was a Russian composer, pianist, and conductor.[3] Rachmaninoff is widely considered one of the finest pianists of his day and, as a composer, one of the last great representatives of Romanticism in Russian classical music.[4] Early influences of Tchaikovsky, Rimsky-Korsakov, and other Russian composers gave way to a personal style notable for its song-like melodicism, expressiveness and his use of rich orchestral colors.[5] The piano is featured prominently in Rachmaninoff's compositional output, and through his own skills as a performer he explored the expressive possibilities of the instrument. 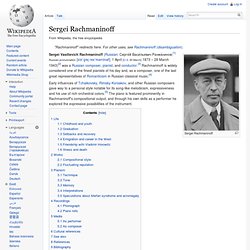 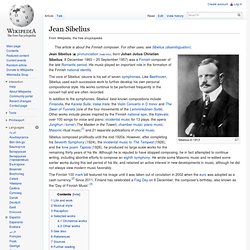 His music played an important role in the formation of the Finnish national identity. The core of Sibelius' oeuvre is his set of seven symphonies. Like Beethoven, Sibelius used each successive work to further develop his own personal compositional style. The Finnish 100 mark bill featured his image until it was taken out of circulation in 2002 when the euro was adopted as a cash currency.[2] Since 2011, Finland has celebrated a Flag Day on 8 December, the composer's birthday, also known as the 'Day of Finnish Music'.[3] Life and work[edit] 11-year-old Sibelius in 1876 Sibelius was born in Hämeenlinna in the Russian Grand Duchy of Finland, the son of Swedish-speaking doctor Christian Gustaf Sibelius and Maria Charlotta Sibelius née Borg. Jean Sibelius: Finlandia. Richard Strauss. Signature of Dr. 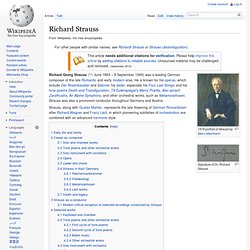 Richard Strauss Strauss, along with Gustav Mahler, represents the late flowering of German Romanticism after Richard Wagner and Franz Liszt, in which pioneering subtleties of orchestration are combined with an advanced harmonic style. Early life and family[edit] Strauss age 22 Strauss married soprano Pauline de Ahna on 10 September 1894. The Strausses had one son, Franz, in 1897. Career as composer[edit] Solo and chamber works[edit] Tone poems and other orchestral works[edit] Strauss with his wife and son, 1910 Strauss's style began to truly develop and change when, in 1885, he met Alexander Ritter, a noted composer and violinist, and the husband of one of Richard Wagner's nieces.