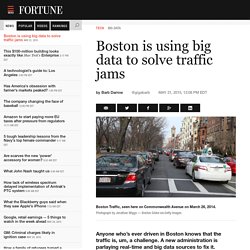 The city is testing a pilot program that uses data compiled from Waze and other sources to deploy bicycle cops to ticket and/or tow cars double parked on Commonwealth Ave., according to Daniel Koh, chief of staff to Boston Mayor Martin Walsh. Big data, IoT to boost Taiwan's information services sector｜WantChinaTimes.com. Viktor Mayer Schorberger gives a speech on Big Data at a forum in Taipei, June 9, 2014. 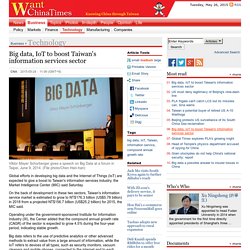 (File photo/Chen Hsin-han) Global efforts in developing big data and the Internet of Things (IoT) are expected to give a boost to Taiwan's information services industry, the Market Intelligence Center (MIC) said Saturday. On the back of development in these two sectors, Taiwan's information service market is estimated to grow to NT$176.3 billion (US$5.78 billion) in 2018 from a projected NT$156.7 billion (US$25.2 billion) for 2015, the MIC said. Operating under the government-sponsored Institute for Information Industry (III), the Center added that the compound annual growth rate (CAGR) of the sector is expected to grow 4.5% during the four-year period, indicating stable growth. Reset.me - Natural Medicines News Outlet and Community.

150520100607.htm#.VV2wONPmBPA. Researchers have found a way to couple the properties of different two-dimensional materials to provide an exceptional degree of control over light waves. 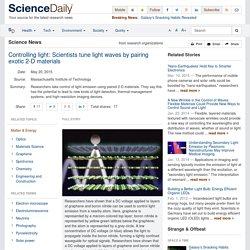 They say this has the potential to lead to new kinds of light detection, thermal-management systems, and high-resolution imaging devices. The new findings -- using a layer of one-atom-thick graphene deposited on top of a similar 2-D layer of a material called hexagonal boron nitride (hBN) -- are published in the journal Nano Letters. The work is co-authored by MIT associate professor of mechanical engineering Nicholas Fang and graduate student Anshuman Kumar, and their co-authors at IBM's T.J. Watson Research Center, Hong Kong Polytechnic University, and the University of Minnesota.

Cell. Marvin sur Twitter : "How to beat bureaucracy as @Airbnb did: #startups #tech. ?utm_content=buffer74899&utm_medium=social&utm_source=twitter. Mike Curtis may not have the typical background of someone dedicated to vanquishing bureaucracy. 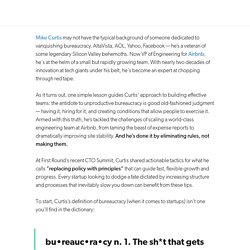 AltaVista, AOL, Yahoo, Facebook — he’s a veteran of some legendary Silicon Valley behemoths. Now VP of Engineering for Airbnb, he's at the helm of a small but rapidly growing team. With nearly two decades of innovation at tech giants under his belt, he's become an expert at chopping through red tape. As it turns out, one simple lesson guides Curtis' approach to building effective teams: the antidote to unproductive bureaucracy is good old-fashioned judgment — having it, hiring for it, and creating conditions that allow people to exercise it. Armed with this truth, he’s tackled the challenges of scaling a world-class engineering team at Airbnb, from taming the beast of expense reports to dramatically improving site stability. 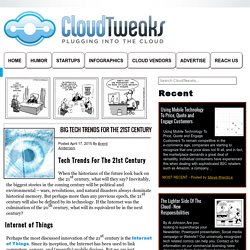 Inevitably, the biggest stories in the coming century will be political and environmental – wars, revolutions, and natural disasters always dominate historical memory. But perhaps more than any previous epoch, the 21st century will also be defined by its technology. If the Internet was the culmination of the 20th century, what will its equivalent be in the next century? Perhaps the most discussed innovation of the 21st century is the Internet of Things. Since its inception, the Internet has been used to link computers, servers, and (recently) mobile devices. A few friends convinced me to join HabitRPG a few weeks ago. 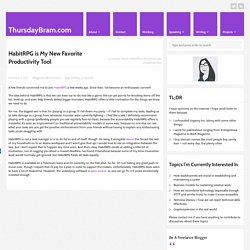 Chrome is my favorite browser and judging from our analytics, it’s the preferred browser of the majority of our readers as well. 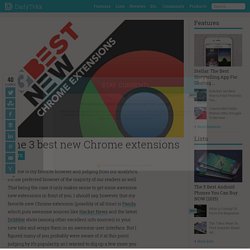 That being the case it only makes sense to get some awesome new extensions in front of you. I should say, however, that my favorite new Chrome extension (possibly of all time) is Panda which puts awesome sources like Hacker News and the latest Dribbble shots (among other excellent info sources) in your new tabs and wraps them in an awesome user interface. 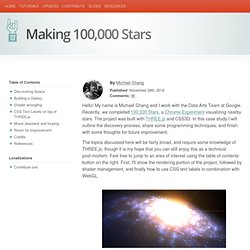 My name is Michael Chang and I work with the Data Arts Team at Google. Recently, we completed 100,000 Stars, a Chrome Experiment visualizing nearby stars. “It’s going great. 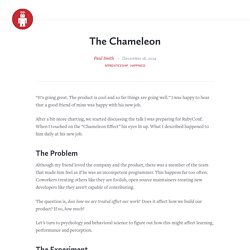 The product is cool and so far things are going well.”