Rise of the Microglia. Isle Talk. A pilot study recently published in the April 2012 edition of the journal of Paediatric Neurology. 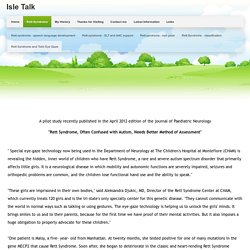 Researchers use stem cell-derived 'mini-brains' to identify drug candidate for rare neurological disorder. Using "mini-brains" built with induced pluripotent stem cells derived from patients with a rare, but devastating, neurological disorder, researchers at University of California, San Diego School of Medicine say they have identified a drug candidate that appears to "rescue" dysfunctional cells by suppressing a critical genetic alteration. 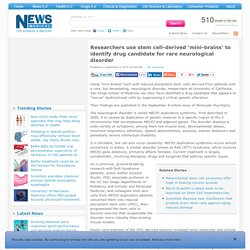 Their findings are published in the September 8 online issue of Molecular Psychiatry. The neurological disorder is called MECP2 duplication syndrome. First described in 2005, it is caused by duplication of genetic material in a specific region of the X chromosome that encompasses MECP2 and adjacent genes. The disorder displays a wide variety of symptoms, among them low muscle tone, developmental delays, recurrent respiratory infections, speech abnormalities, seizures, autistic behaviors and potentially severe intellectual disability. It is heritable, but can also occur randomly. "This work is encouraging for several reasons," said Muotri. 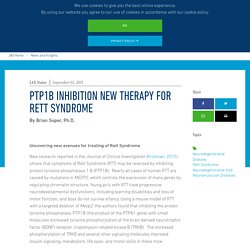 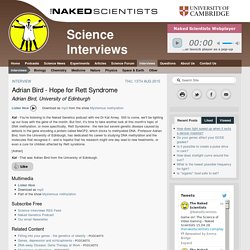 New Treatment for Rett Syndrome Suggests the Disorder is Reversible - The Latest News. Rett syndrome is a very rare autistic disorder that is not detectable at birth (in most cases signs of it develop at 6 to 18 months of age) and occurs in about 1 in 10,000 to 1 in 15,000 females, as 90% of the children who have Rett syndrome are girls. 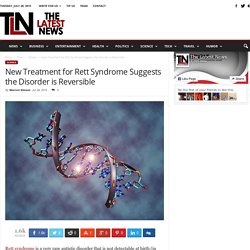 Most boys diagnosed with this disorder die within the first 2 years due to a severe encephalopathy. Mostly girls are affected because they have two X chromosomes, and the disorder is caused by mutations in a gene on the X chromosome called MECP2. Rett syndrome is considered one of the most devastating and deadliest forms classified in the autism spectrum disorders, and current therapy relies only on treatment of the symptoms. New Discovery About the X Chromosome - Rettsyndrome.org. July 1, 2015 A critical paper regarding the X chromosome was published this week in Sciencexpress (June 18, 2015 pages 1-19) that will have a direct bearing on Rett syndrome in the foreseeable future. 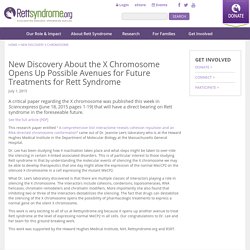 See the full article [PDF] RSRT Awards $530,000 to Neurolixis for Clinical Development of NLX-101. RSRT recently awarded $530,000 to Neurolixis, a small biotech firm in southern California that is developing the drug, NLX-101, to treat breathing abnormalities in people affected by Rett Syndrome. 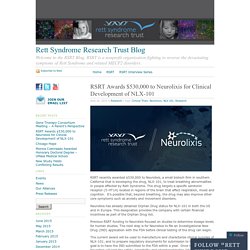 The drug targets a specific serotonin receptor (5-HT1A) located in regions of the brain that affect respiration, mood and cognition. It’s possible that, beyond breathing, the drug may also improve other core symptoms such as anxiety and movement disorders. Neurolixis has already obtained Orphan Drug status for NLX-101 in both the US and in Europe. This designation provides the company with certain financial incentives as part of the Orphan Drug Act. Previous RSRT funding to Neurolixis focused on studies to determine dosage levels for human studies. The current award will be used to manufacture and characterize clinical supplies of NLX-101, and to prepare regulatory documents for submission to the FDA. Medscape Log In. Scoliosis-management-for-clinicians.pdf. Longevity in Rett Syndrome: Analysis of the North American Database. Study questions promise of bone marrow transplant for Rett — Vetpathologist/Shutterstock.com Transplant trouble: A Minnesota clinic has canceled its trial of bone marrow transplants in children with Rett syndrome. 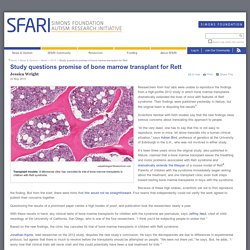 Researchers from four labs were unable to reproduce the findings from a high-profile 2012 study in which bone marrow transplants dramatically extended the lives of mice with features of Rett syndrome. Their findings were published yesterday in Nature, but the original team is disputing the results1. Scientists familiar with both studies say that the new findings raise serious concerns about translating this approach to people.

“At the very least, one has to say that this is not easy to reproduce, even in mice, let alone translate into a human clinical situation,” says Adrian Bird, professor of genetics at the University of Edinburgh in the U.K., who was not involved in either study. Because of these high stakes, scientists set out to first reproduce the finding. Early promise: Trial and error: References: 1: Wang J. et al. Buildup of gene tags may clarify timing of Rett syndrome — ©iStock.com/selvanegra Tag team: The protein missing in Rett syndrome binds to chemically labeled swaths of DNA that change as a young child matures. 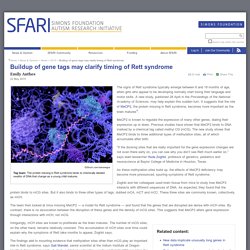 The signs of Rett syndrome typically emerge between 6 and 18 months of age, when girls who appear to be developing normally start losing their language and motor skills. 18 Amazing Rett Syndrome Statistics. For girls, Rett Syndrome is one of the scarier neurodevelopmental disorders that can occur. 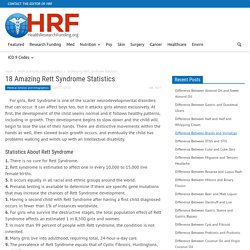 It can affect boys too, but it attacks girls almost exclusively. At first, the development of the child seems normal and it follows healthy patterns, including in growth. Then development begins to slow down and the child will begin to lose the use of their hands. There are distinctive movements within the hands as well, then slowed brain growth occurs, and eventually the child has problems walking and winds up with an intellectual disability. Rett mutation may lead to runaway inflammation — Professor John Zajicek/Science Photo Library Brain boost: Immune cells in the brain, called microglia, may accelerate Rett syndrome’s trajectory. The mutation that causes Rett syndrome may spark uncontrolled inflammation throughout the body and brain, suggests a study published last week in Immunity1.

The findings may explain the syndrome’s wide range of symptoms, from seizures to gut problems. Rett syndrome is an autism-linked disorder that usually stems from mutations in MeCP2. VeinViewer Means No More Poking People Relentlessly to Locate Veins. Sound processing skewed in mouse model of Rett syndrome — Researchers have traced an unusual maternal behavior in female mice modeling Rett syndrome to a neural circuit that processes sound. They have also found a drug that reverses this behavior. The unpublished results, presented Wednesday at the 2015 Wiring the Brain meeting in Cold Spring Harbor, New York, point to a possible pathway that links the genetic deficit in Rett syndrome to specific behavioral abnormalities.

“We want to understand what’s happening at the molecular level, how that manifests at the circuit level, and then connect that to behavior,” says lead investigator Stephen Shea, assistant professor at Cold Spring Harbor Laboratory in New York. Most cases of Rett syndrome stem from mutations in MeCP2, a gene located on the X chromosome. Facebook. Research from Harvard University Points to Potential New Avenue for Treatment of Rett Syndrome. Every cell in our body contains the same genes. Yet a brain cell is distinctly different from a heart cell or a liver cell. What differentiates these cells are the genes that are either silenced or active and the degree of activation of the genes, also known as expression. Scientists have known for many years that the “Rett protein”, MeCP2, regulates the expression of other genes. The big question has been, which genes? 5th Annual Reverse Rett London Speeches. Upload Reverse Rett website Subscription preferences Loading...

Working... Reverse Rett ► Play all. Opening Talks with Steve Kaminsky. Rett Syndrome Research Trust. If you love a child with Rett Syndrome you no doubt want the answer to this question: Will there be a cure for my child and if so, when? At RSRT we are confident that effective treatments and, ultimately, a cure, will come. Our confidence stems from scientific evidence. The fact that there is no degeneration in the brain sets the disorder apart from many other neurological diseases, and the dramatic reversibility of symptoms in the mouse model brings optimism to families and enthusiasm to the research community. Rousing silenced X chromosome may treat Rett syndrome — 14 – Rettsyndrome.org Blog - Neurohabilitation - Rettsyndrome.org. September 29, 2014 We’ve just announced some of the exciting studies in a brand new research area here at Rettsyndrome.org, and we wanted to take a moment to discuss what the program is and what aims to achieve.

Clinical Trial panel IGF1 and How Trials Happen WKaufmann Conf2014.pdf. Rett Syndrome Research Trust Blog. GAZE. Functional Gaze Control in Young Children with Cerebral Palsy. Our Role and Impact – News – Rettsyndrome.org Blog - Rettsyndrome.org. This blog was originally posted by CureRett, and has been adapted for Rettsyndrome.org through our continued partnership. by Elizabeth Halford, with contributions from Steve Kaminsky, Ph.D., Janice Ascano, Ph.D., Paige Nues, Monica Coenraads and Kori Coates. As of late, there's been much buzz about gene therapy as a potential treatment for Rett syndrome.