Cornelius Eady. Biography[edit] Cornelius Eady was born in Rochester, New York and is an author of seven volumes of poetry. 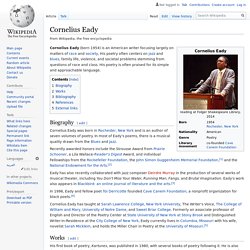 In most of Eady’s poems, there is a musical quality drawn from the Blues and Jazz. Recently awarded honors include the Strousse Award from Prairie Schooner, a Lila Wallace-Reader's Digest Award, and individual Fellowships from the Rockefeller Foundation, the John Simon Guggenheim Memorial Foundation,[1] and the National Endowment for the Arts.[2] Eady has also recently collaborated with jazz composer Deirdre Murray in the production of several works of musical theater, including You Don't Miss Your Water, Running Man, Fangs, and Brutal Imagination. Eady's work also appears in Blackbird: an online journal of literature and the arts.[3] In 1996, Eady and fellow poet Toi Derricotte founded Cave Canem Foundation, a nonprofit organization for black poets.[4] Works[edit] His first book of poetry, Kartunes, was published in 1980, with several books of poetry following it. 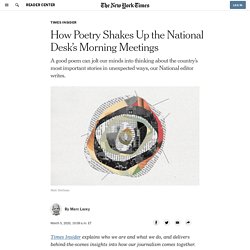 Lauretta Charlton, the editor of Race/Related, our team covering race and identity, chose Wordsworth’s “The World Is Too Much With Us”: The world is too much with us; late and soon,Getting and spending, we lay waste our powers;—Little we see in Nature that is ours;We have given our hearts away, a sordid boon! Just the other day, I took the editors to Harlem through Langston Hughes’s poem by that name: What happens to a dream deferred? Does it dry uplike a raisin in the sun? To leaven the mood on a Friday, Julie Bloom, a deputy National editor, read a poem about a runaway bagel (“The Bagel,” by David Ignatow): Faster and faster it rolled,with me running after itbent low, gritting my teeth,and I found myself doubled overand rolling down the streethead over heels, one complete somersaultafter another like a bageland strangely happy with myself.

What effect has such beautiful and rhythmical writing had upon us as journalists? Milman Parry. Milman Parry (June 23, 1902 – December 3, 1935) was an American scholar of epic poetry and the founder of the discipline of oral tradition. 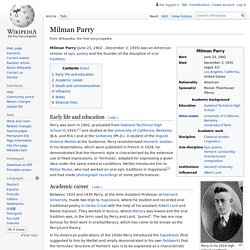 Early life and education[edit] Parry in his 1919 high school yearbook Parry was born in 1902, graduated from Oakland Technical High School in 1919,[1] and studied at the University of California, Berkeley (B.A. and M.A.) and at the Sorbonne (Ph.D.). The Best Poetry Books of 2019. A PIECE OF GOOD NEWS, by Katie Peterson. 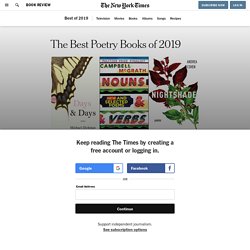 (Farrar, Straus & Giroux, $23.) Peterson’s prickly, playful book is filled with quasi parables (including a poem called “New Parable”) that often keep an attractive distance from their own sponsoring emotions — attractive in part because when Peterson chooses to narrow that gap, the results are striking. So we pass from “The Fountain,” a knottily delightful examination of what it means to make something — a statue of a woman by a fountain, a poem, a relationship with an audience — to “The Massachusetts Book of the Dead,” a series of short poems focused on the death of Peterson’s mother that includes these almost brutally straightforward lines: My mother died at nine o’clock at night. I will be awake past my bedtime forever. It’s as if a fable split open and a diary page fell out. NO MATTER, by Jana Prikryl. Dandelions on the lawn are playing. Silverhorn by Hilda Conkling. Susan Miles again « Great War Fiction. My interest in Susan Miles having been aroused, I ordered two books of her poems from the depths of the Bodleian – Annotations of 1922 and The Hares and other poems of 1924. 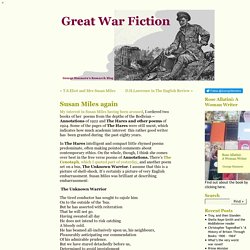 Some of the pages of The Hares were still uncut, which indicates how much academic interest this rather good writer has been granted during the past eighty years. In The Hares intelligent and compact little rhymed poems predominate, often making pointed comments about contemporary ethics. On the whole, though, I think she comes over best in the free verse poems of Annotations. There’s The Cenotaph, which I quoted part of yesterday, and another poem set on a bus, The Unknown Warrior. I assume that this is a picture of shell-shock.

The Unknown Warrior The tired conductor has sought to cajole him On to the outside of the ‘bus. Like this: Like Loading... Full text of "The Collected Poems Of Edith Sitwell" The Cat and the Moon, by W. B. Yeats.