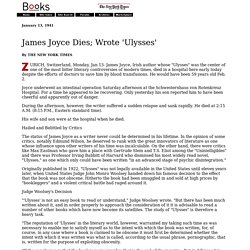 He would have been 59 years old Feb. 2. Joyce underwent an intestinal operation Saturday afternoon at the Schwesternhaus von Rotenkreuz Hospital. For a time he appeared to be recovering. Only yesterday his son reported him to have been cheerful and apparently out of danger. Joyce Carol Oates. American author Oates taught at Princeton University from 1978 to 2014 and is the Roger S. 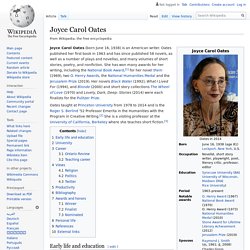 Berlind '52 Professor Emerita in the Humanities with the Program in Creative Writing.[2] She is a visiting professor at the University of California, Berkeley where she teaches short fiction.[3] Early life and education[edit] Oates attended the same one-room school her mother had attended as a child.[4] She became interested in reading at an early age and remembers Blanche's gift of Lewis Carroll's Alice's Adventures in Wonderland (1865) as "the great treasure of my childhood, and the most profound literary influence of my life. This was love at first sight! " As a teen, Oates also received early recognition for her writing by winning a Scholastic Art and Writing Award.[11] Polydorus of Troy. Polydorus or Polydoros (; Ancient Greek: Πολύδωρος, i.e. 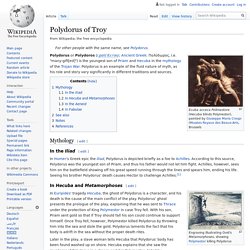 "many-gift[ed]") is the youngest son of Priam and Hecuba in the mythology of the Trojan War. Polydorus is an example of the fluid nature of myth, as his role and story vary significantly in different traditions and sources. Mythology[edit] In the Iliad[edit] In Homer's Greek epic the Iliad, Polydorus is depicted briefly as a foe to Achilles. In Hecuba and Metamorphoses[edit] Engraving illustrating Ovid's Metamorphoses, showing Polymestor killing Polydorus Later in the play, a slave woman tells Hecuba that Polydorus’ body has been found washed up on shore. Achilles. List of His Dark Materials and The Book of Dust characters. This is a list of characters from the Philip Pullman trilogies, His Dark Materials andThe Book of Dust. 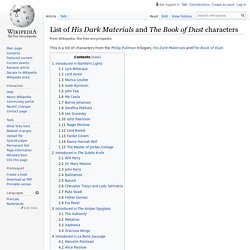 Introduced in Northern Lights[edit] Lyra Belacqua[edit] Lord Asriel[edit] Lord Asriel is a member of the English aristocracy and Lyra's father. His dæmon Stelmaria is a snow leopard.[1] Asriel had an affair with Marisa Coulter, a married woman, leading to Lyra's birth. Asriel is described as being "a tall man with powerful shoulders, a fierce dark face, and eyes that seem to flash and glitter with savage laughter".[1] Possessed of enormous determination and willpower, he is fierce in nature and commands great respect in both the political and academic spheres, being a military leader and a fellow of Jordan College. The Fantastic Flying Books of Mr Morris Lessmore: An Interpretation.

The world has become a harsh place. 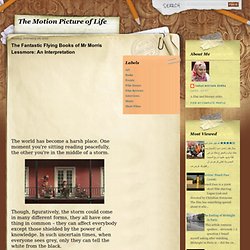 One moment you're sitting reading peacefully, the other you're in the middle of a storm. Though, figuratively, the storm could come in many different forms, they all have one thing in common – they can affect everybody except those shielded by the power of knowledge. In such uncertain times, when everyone sees grey, only they can tell the white from the black. While everybody runs for their lives, Mr Morris Lessmore runs after the book he was reading before the storm came. The world is turning upside down, yet this is not enough to turn him away from his life goal – seeking knowledge. However, if not refreshed inside the mind, knowledge gradually evapourates with time. In no time, Lessmore becomes as black and white as the messy world he finds himself in. But knowledge never fails those who seek it.

He finds himself in a library inhabited by millions of fantastic, flying books. Mr Lessmore, above all, shares his knowledge of books with others. The Fantastic Flying Books of Mr. Morris Lessmore. About[edit] Morris Lessmore sits on a balcony in the French Quarter of New Orleans writing a memoir. 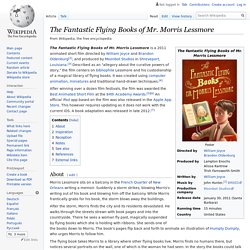 Suddenly a storm strikes, blowing Morris's writing out of his book and blowing him off the balcony. While Morris frantically grabs for his book, the storm blows away the buildings. After the storm, Morris finds the city and its residents devastated. He walks through the streets strewn with book pages and into the countryside. The flying book takes Morris to a library where other flying books live. Shelob. Literature[edit] Shelob was an "evil thing in spider-form... 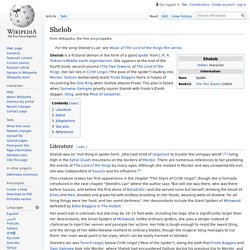 [the] last child of Ungoliant to trouble the unhappy world",[1] living high in the Ephel Dúath mountains on the borders of Mordor. There are numerous references to her predating the events of The Lord of the Rings by many ages. Although she resided in Mordor and was unrepentantly evil, she was independent of Sauron and his influence.[2] Her exact size is unknown, but she may be 10–15 feet wide, including her legs.

Name[edit] As Tolkien admitted in a letter to his son, Shelob "is of course only 'she + lob'", lob being an archaic English word for spider, influenced by Old English loppe or "spider". Middle-earth objects. J. 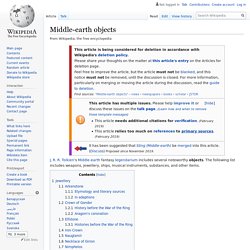 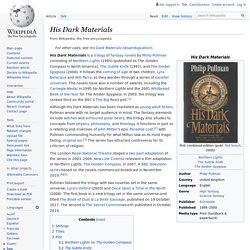