Train to Busan. Plot[edit] Seok-woo is a divorced fund manager, a workaholic, and absentee father to his young daughter Su-an. 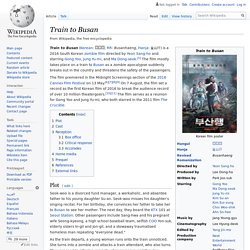 Seok-woo misses his daughter's singing recital. For her birthday, she convinces her father to take her to Busan to see her mother. The next day, they board the KTX 101 at Seoul Station. Other passengers include Sang-hwa and his pregnant wife Seong-kyeong, a high school baseball team, selfish COO Yon-suk, elderly sisters In-gil and Jon-gil, and a stowaway traumatised homeless man repeating "everyone dead. " As the train departs, a young woman runs onto the train unnoticed. Seok-woo, Sang-hwa and Yong-guk - who have become separated from their loved ones - fight their way to where Su-an and Seong-kyeong are hiding with In-gil and the homeless man.

A blocked track at East Daegu train station forces the survivors to stop and search for another train. Su-an and Seong-kyeong get off at Busan and begin walking through a train tunnel. Meet the Most Important Mogul in South Korean Entertainment. Since the moment the lights went up last May at the Grand Theatre Lumière in Cannes (which preceded an eight-minute standing ovation), Bong Joon Ho's Parasite has broken precedent after precedent: first South Korean film to receive the Palme d'Or, first foreign movie to win the SAG Awards' ensemble prize, Korea's first Oscar nominee (it has six nods) — and, come Feb. 9, the $162 million grossing social thriller has a credible chance to win best picture, which would make it the first non-English-language film to do so. 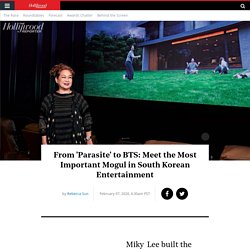 Behind Parasite's — and Korea's — catapult to the forefront of the cinematic conversation is Miky Lee, the heiress turned media mogul whose $4.1 billion entertainment empire serves as the foundation of much of the country's cultural output, from television dramas streamed by millions of viewers worldwide to K-pop concerts packing arenas around the globe to movies dominating the box office in Asia and, perhaps soon, farther west. 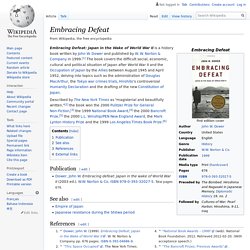 Dower and published by W. W. Norton & Company in 1999.[1] The book covers the difficult social, economic, cultural and political situation of Japan after World War II and the Occupation of Japan by the Allies between August 1945 and April 1952, delving into topics such as the administration of Douglas MacArthur, the Tokyo war crimes trials, Hirohito's controversial Humanity Declaration and the drafting of the new Constitution of Japan. Described by The New York Times as "magisterial and beautifully written,"[2] the book won the 2000 Pulitzer Prize for General Non-Fiction,[3] the 1999 National Book Award,[4] the 2000 Bancroft Prize,[5] the 2000 L.L. Winship/PEN New England Award, the Mark Lynton History Prize and the 1999 Los Angeles Times Book Prize.[6] Publication[edit] Dower, John W.

China. Ravana. Mythological character in the Ramayana Raja of Lanka Ravana (IAST: Rāvaṇa; ;[1]) is described in the Hindu epic Ramayana as the great king of Lanka. 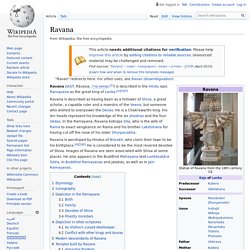 [a][2][3] Ravana is worshiped by Hindus of Bisrakh, who claim their town to be his birthplace.[4][5][6] He is considered to be the most revered devotee of Shiva. Images of Ravana are seen associated with Shiva at some places. Etymology[edit] The word Rāvaṇa (Sanskrit: रावण) means roaring opposite of Vaiśravaṇa meaning "hear distinctly" (passive).[7][8] Both Ravana and Vaiśravaṇa, who is popularly known as Kubera, are considered to be patronymics derived as "sons of Vishrava".[7][8][9][10] Rāvana was a title taken on later by Dashananda, and it means "screamer" in Sanskrit (Ravana would sing hymns).[11] Further, roravana is Sanskrit for "loud roaring. 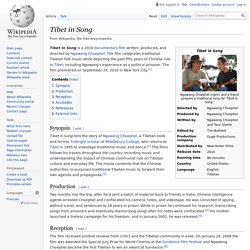 The film celebrates traditional Tibetan folk music while depicting the past fifty years of Chinese rule in Tibet, including Ngawang's experience as a political prisoner. Ngawang Choephel. Ngawang Choephel (born 1966) is a documentary filmmaker, director and producer. 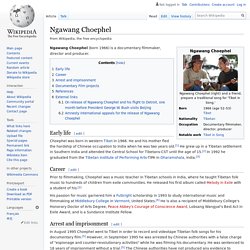 Early life[edit] Choephel was born in western Tibet in 1966. He and his mother fled the hardship of Chinese occupation to India when he was two years old.[1] He grew up in a Tibetan settlement in Southern India and attended the Central School for Tibetans-CST until the age of 15.[2] In 1992 he graduated from the Tibetan Institute of Performing Arts-TIPA in Dharamshala, India.[3] Career[edit] Prior to filmmaking, Choephel was a music teacher in Tibetan schools in India, where he taught Tibetan folk music to hundreds of children from exile communities. His passion for music garnered him a Fulbright scholarship in 1993 to study international music and filmmaking at Middlebury College in Vermont, United States.[4] He is also a recipient of Middlebury College's Honorary Doctor of Arts Degree, Peace Abbey's Courage of Conscience Award, Lobsang Wangyal's Best Act in Exile Award, and is a Sundance Institute Fellow.