Football Top10s - 10 players dubbed ‘The New Maradona’ Gaining the reputation from a young age, Pablo Aimar was instantly compared to Maradona with his eye catching performances for River Plate in the early noughties. 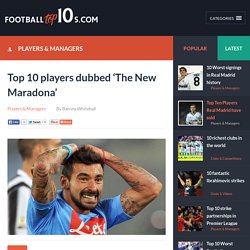 He was also a favourite amongst Championship Manager players specifically the 2001/02 addition. A short, smart and agile player who sent shockwaves through Europe when he joined Valencia in 2001. He rewarded them with his performances after the €22,000,000 move as Valencia finished top of the league the season he arrived. He went onto to win another La Liga, win a UEFA Cup and reach the Champions League final. Unfortunately injury and a bout of meningitis meant his career took a slide, when he joined Benfica in 2009 he refound some of that form with some eye catching performances linking with former team mate Javier Saviola. In terms of build and playing style, again there were big similarities with the two. Lavezzi’s impressive performances at Napoli were what drew the comparisons with Maradona.

Barney Whitehall. Football Top 10s - 10 oldest players to have scored in the Premier League. Teddy Sheringham (West Ham) 40 years and 268 days - 2006 Teddy Sheringham made Premier League history when he scored a late consolation for West Ham in a 2-1 defeat by his former side Portsmouth on Boxing Day 2006 Ryan Giggs (Man Utd) 39 years and 86 days - 2013 As at 9th January 2014, Ryan Giggs last Premiership goal was in February 2013 with Man Utd winning 2-0 against QPR. 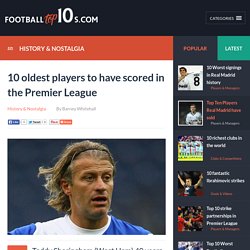 He has scored since in Champion League, FA Cup and League Cup. But he is yet to score in his 40’s in the Premiership. Football Top10s - 10 of the fiercest rivalries in club football. Most cities in the World have derby days and it is the main event for fans, pundits and in some cases police. 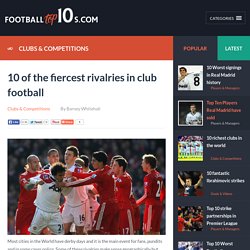 Some of these rivalries make sense geographically but others run with a much deeper ideology for the hatred of one another. Here is a list of the biggest grudge matches throughout the World. Local rivals in North London, but part of the reason this rivalry is so fierce is due to the fact that Arsenal originate from Woolwich in South East London. It’s often heard chanted at the North London derby ‘F*ck off back to Woolwich, North London is ours!’. Other than a brief period in the 1960s, Arsenal have dominated this rivalry with 13 league titles to Spurs two. Moving from one club to the other also doesn’t go down well. Panathinaikos vs Olympiakos Billed as a clash between the ‘eternal enemies’ of Greek Football, this game sees passions run high on and off the pitch. AC Milan vs Inter Milan Two European Giants in football, this rivalry surprisingly has some English roots. Football Top10s - 10 'One Club Men'

It is a rarity to see a player stay at a club for their whole career in this day and age, but when they do they tend to boast incredible statistics and records if they have made it into the European elite and adapted their game throughout their careers. 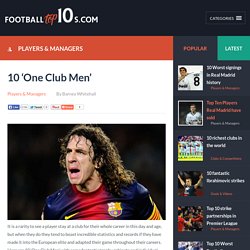 Here are 10 ‘One Club Men’ with some fantastic trophy cabinets and individual awards. Rogério Ceni – Sao Paulo (1152 appearances) Ceni is the most capped player for any team in history. 1152 appearances is astonishing and he did this over a period of 2 decades. He has won 17 major titles with the Brazilian giants and was capped for his country 33 times between 1997-2006. What makes Ceni unique, is that he is the penalty and free kick taker for Sao Paulo and has scored over 100 goals for them.

It is quite incredible that a goalkeeper could score over 100 goals for his club but Ceni has been doing it for years making set pieces look ridiculously easy. Tony Adams – Arsenal (672 appearances) Francesco Totti – Roma (707 appearances) The 10 Best Arsenal FC Players Of The 21st Century - Listicles. 9 Of The Best Strikers In World Football - Listicles. 10 Of The Very Best Goalkeepers Today In World Football - Listicles. Ranking the top 20 Premier League players of the season. 11 of the best football social media campaigns.

Premier League football clubs have acquired more than 200 million Facebook likes and 30 million Twitter followers, and eight of last year’s top ten tweeted moments in the UK were football related. The sport’s position as the world leader in online conversation offers brands the ideal playing field to engage with fans to build customer relationships, generate exposure, loyalty and trust across multiple markets. Here, Matt House, founder and chief executive of sports marketing agency SportQuake, takes a look at some of the best football-led digital campaigns and content. 1. McDonald’s and Fifa World Cup – #FryFutbol Thanks to an always-on production studio, McDonald’s was able to replicate World Cup 2014 moments using fries and publish videos to Facebook within hours. 2.

Tottenham Hotspur and Chelsea fans went head to head on Twitter by using bespoke hashtags to select the colour of the Wembley Arch ahead of the 2015 Capital One Cup Final. 3. 4. . — adidas UK (@adidasUK) March 15, 2015 5. 6. The 13 Greatest Brazilian Football/Soccer Players Of The 21st Century - Listicles. 11 Things For A Football/Soccer Fan's Bucket List - Listicles.