Google Remarketing for Mobile Applications. The app world continues to be a fiercely competitive area. 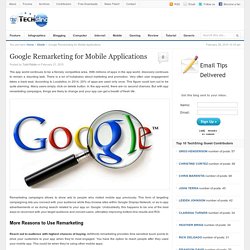 With millions of apps in the app world, discovery continues to remain a daunting task. There is a lot of hullabaloo about marketing and promotion. Very often user engagement takes a back seat. According to Localytics, in 2014, 20% of apps are used only once. This figure could turn out to be quite alarming. 11 Mobile. Apple Pay’s Unstoppable March Ahead in the Mobile Payment System. The number of vendors accepting Apple Pay has witnessed a steady increase since the service launched on the iPhone 6 in October. 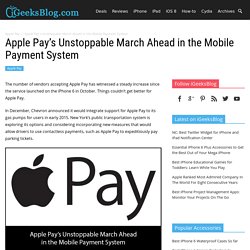 Things couldn’t get better for Apple Pay. In December, Chevron announced it would integrate support for Apple Pay to its gas pumps for users in early 2015. New York’s public transportation system is exploring its options and considering incorporating new measures that would allow drivers to use contactless payments, such as Apple Pay to expeditiously pay parking tickets. The payment platform will probably launch internationally this year as well. Apple Pay is soon gaining market traction and popularity among consumers and could soon become a form to reckon with in the highly saturated mobile wallet market. 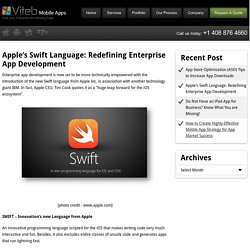 In fact, Apple CEO, Tim Cook quotes it as a “huge leap forward for the iOS ecosystem”. [photo credit - www.apple.com] SWIFT – Innovation’s new Language from Apple An innovative programming language scripted for the iOS that makes writing code very much interactive and fun. Besides, it also excludes entire classes of unsafe code and generates apps that run lightning fast. Swift is easy to learn, and thereby inspires more people to dream big and create whole new categories of apps.

Again Apple in association with IBM, chalks out an ambitious plan to redefine the mobile enterprise and touch new heights in enterprise app development using the lightning fast language – Swift. Why Shift to Swift programming? This is one of the most pertinent questions iOS developers ask. Cracking the Code: Tips to Hire the Perfect Mobile App Developer. With companies rushing to develop mobile apps, the war for top developers is fierce than ever. 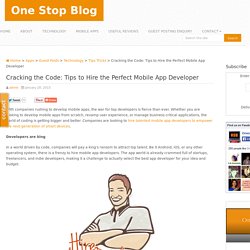 Whether you are looking to develop mobile apps from scratch, revamp user experience, or manage business critical applications, the world of coding is getting bigger and better. Companies are looking to hire talented mobile app developers to empower the next generation of smart devices. Developers are king In a world driven by code, companies will pay a king’s ransom to attract top talent. Be it Android, iOS, or any other operating system, there is a frenzy to hire mobile app developers. You also want to ensure that your developer is capable of creating a well-designed app, functional, and easy-to-use app that people will want to download. 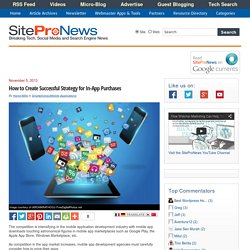 Mobile App Design & Development Services Company. iPhone Application Development Company :VitebMobileApps. Do Not Have an iPad App for Business? Know What You are Missing! iPads have in the true sense offered itself as a viable alternative for laptops – both in the personal sphere as well as in business. 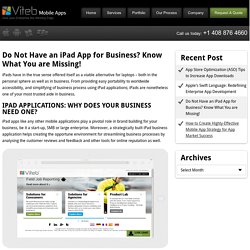 From providing easy portability to worldwide accessibility, and simplifying of business process using iPad applications; iPads are nonetheless one of your most trusted aide in business. iPad apps like any other mobile applications play a pivotal role in brand building for your business, be it a start-up, SMB or large enterprise. Moreover, a strategically built iPad business application helps creating the opportune environment for streamlining business processes by analysing the customer reviews and feedback and other tools for online reputation as well. App Store Optimization (ASO) Tips to Increase App Downloads.

Mobile app is fast evolving into a multi-million dollar industry. 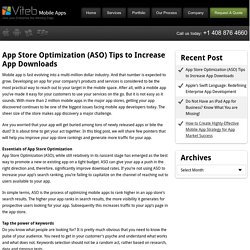 And that number is expected to grow. Developing an app for your company’s products and services is considered to be the most practical way to reach out to your target in the mobile space. After all, with a mobile app you’ve made it easy for your customers to use your services on the go. But it is not easy as it sounds. With more than 2 million mobile apps in the major app stores, getting your app discovered continues to be one of the biggest issues facing mobile app developers today. Are you worried that your app will get buried among tons of newly released apps or bite the dust? Game App Development: Mobile Game Design & Development Company :VitebMobileApps. We are a premier offshore Mobile Game Development Company in India having created stunning, interactive and power-packed mobile game applications. 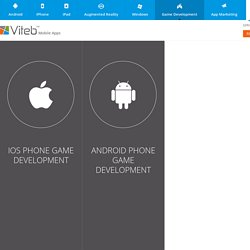