Todd Helton is a Knoxville native and is known as one of the best sluggers in UT history. Alumni recall Todd Helton was part of the team that finished third in the College World Series. Mr. Helton was named the 1995 National Collegiate Baseball player of the year. He was a dual-sport athlete at UT Knoxville, lettering in baseball and football, where he was backed by future Super Bowl champion Peyton Manning. In his 1997 debut for the Colorado Rockies, Todd Helton recorded his first hit and homerun. He would conclude his Major League Baseball career with 369 home runs and 2,519 hits. Todd Helton’s best season came in 2000, when he blasted a National League season record 216 hits and led the major leagues in batting average, RBI, doubles, total bases, extra base hits and slugging percentage. Mr. Helton became only the fourth player in National League history to lead in both batting average and RBIs. He was named the Associated Press Major League Baseball player of the year. Todd Helton’s prolific career also included the Hank Aaron Award and being named an all-star five times. Todd Helton recently celebrated his 20th anniversary with wife Christy Bollman. Todd & Christy have two beautiful daughters together. 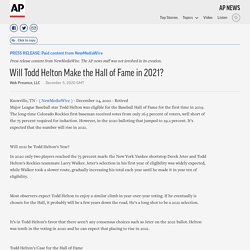 The long-time Colorado Rockies first baseman received votes from only 16.5 percent of voters, well short of the 75 percent required for induction. However, in the 2020 balloting that jumped to 29.2 percent. It’s expected that the number will rise in 2021. Will 2021 be Todd Helton’s Year? In 2020 only two players reached the 75 percent mark: the New York Yankee shortstop Derek Jeter and Todd Helton’s Rockies teammate Larry Walker. Todd Helton's Path to the Baseball Hall of Fame.

Knoxville, TN - ( NewMediaWire ) - October 13, 2020 - For more than a decade and a half, Todd Helton has rung in hit after hit with his tenure on the Colorado Rockies. 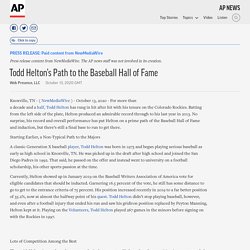 Batting from the left side of the plate, Helton produced an admirable record through to his last year in 2013. No surprise, his record and overall performance has put Helton on a prime path of the Baseball Hall of Fame and induction, but there’s still a final base to run to get there. Starting Earlier, a Non-Typical Path to the Majors A classic Generation X baseball player, Todd Helton was born in 1973 and began playing serious baseball as early as high school in Knoxville, TN. He was picked up in the draft after high school and joined the San Diego Padres in 1992.

Currently, Helton showed up in January 2019 on the Baseball Writers Association of America vote for eligible candidates that should be inducted. Lots of Competition Among the Best That said, Helton is not the only name on the inductee roster. Is Todd Helton The Greatest Rockies Player Ever? MLB Legend Todd Helton's Five Tips To Boost Your Batting Average. Press release content from NewMediaWire. 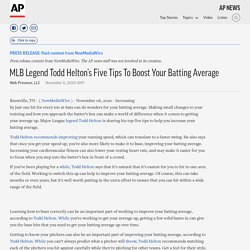 Former major league baseball players like Todd Helton have suggested an at-bat against a quality pitcher is the equivalent to playing a chess match against a master champion. 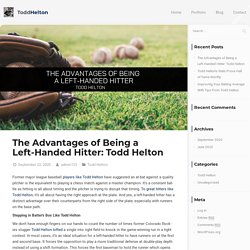 It’s a constant battle as hitting is all about timing and the pitcher is trying to disrupt that timing. To great hitters like Todd Helton, it’s all about having the right approach at the plate. And yes, a left-handed hitter has a distinct advantage over their counterparts from the right side of the plate, especially with runners on the base path. Stepping in Batter’s Box Like Todd Helton We don’t have enough fingers on our hands to count the number of times former Colorado Rockies slugger Todd Helton lofted a single into right field to knock in the game-winning run in a tight contest.

The number of options doubles as the hitter can put the ball through the hole into right field that could score a run or at least make the bases loaded for the next batter. Todd Helton's Stats Prove Hall of Fame Worthy - Todd Helton. Colorado Rockies legendary first baseman Todd Helton put up impressive numbers throughout his 17-year career. 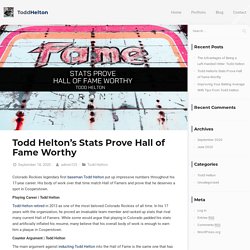 His body of work over that time match Hall of Famers and prove that he deserves a spot in Cooperstown. Playing Career | Todd Helton Todd Helton retired in 2013 as one of the most beloved Colorado Rockies of all time. In his 17 years with the organization, he proved an invaluable team member and racked up stats that rival many current Hall of Famers. While some would argue that playing in Colorado padded his stats and artificially inflated his resume, many believe that his overall body of work is enough to earn him a plaque in Cooperstown. Improving Your Batting Average With Tips From Todd Helton. Todd Helton Has Cornered The Market On Hitting Baseballs Out Of The Park KNOXVILLE, TN, UNITED STATES, June 2, 2020 /EINPresswire.com/ -- After a 17-year career with the Colorado Rockies, Todd Helton has been considered for Cooperstown, USA Hall of Fame status. 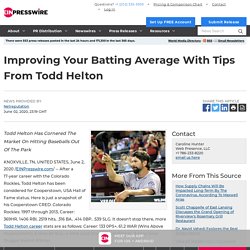 Here is just a snapshot of his Cooperstown CRED: Colorado Rockies: 1997 through 2013, Career: 369HR, 1406 RBI, 2519 hits, .316 BA, .414 0BP, .539 SLG. It doesn't stop there, more Todd Helton career stats are as follows: Career: 133 0PS+, 61.2 WAR (Wins Above Replacement), 5-time All-Star, 4-time Gold Glove Award Winner, 3-time Silver Slugger Award Winner. With career OPS of .953, Todd Helton is the 19th best in major league baseball history. This is why Todd Helton appears on the ballot for baseball Hall of Fame inclusion. Todd Helton's Mentor Career Is Just Beginning At 46 years of age, he is in the process of reinventing himself to continue lending all that he has to his family, as well as the sport that he loves. You just read: Home - Todd Helton. Todd Helton - Accueil. Todd Helton - Knoxville, TN. Todd Helton.