How small businesses are using social media. 25 awesome social media tools your brand should be using this year. 14 social media trends for 2014. According to these predictions, budgets will increase, niches will grow, veteran content creators will be rewarded, and some people will turn on social media. By Adam Vincenzini | Posted: January 2, 2014 The importance of content in the constantly evolving era of social media will be the major social media push of 2014. This presentation captures the 14 of the trends resulting from this bigger movement. Study: Women Love Social Media More Than Men (Unless It's LinkedIn) Women use every major social media channel more than men—except for LinkedIn—according to a Pew Research study released today. 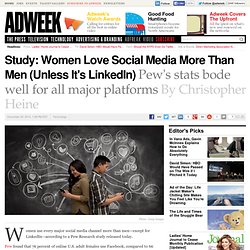 Pew found that 76 percent of online U.S. adult females use Facebook, compared to 66 percent for online males, while fairly similar women/men percentage splits exist for Twitter (18 percent/17 percent), Instagram (20/17) and Pinterest (33/8). Indeed, one-third of women are now using Pinterest. But then there's LinkedIn: the researcher said 24 percent of Internet-using men employ the site compared to 19 percent of women. Every major platform, Pew says, has experienced an uptick in users compared to December 2012, as 73 percent of online consumers now utilize at least one social media channel and 42 percent use multiple ones. Instagram made particularly strong gains in the last year with 18-to-29-year-olds (up nine percentage points to 37 percent) and African Americans (up 11 percentage points to 34 percent), the researcher said. Check out the full Pew study here. [Report] The State of Social Business 2013: The Maturing of Social ... Piktochart: Infographic and Presentation Tool for Non-Designers.

The ultimate guide to social media tools. Social media tools are supposed to make your life easier, but there are dozens floating around out there, and you don't have time to research and test them all out. 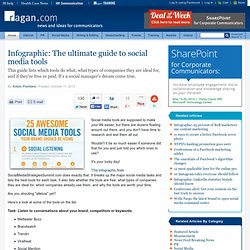 Wouldn't it be so much easier if someone did that for you and just told you which ones to use? It's your lucky day! This infographic from SocialMediaStrategiesSummit.com does exactly that. It breaks up the major social media tasks and lists the best tools for each task. It also lists whether the tools are free, what types of companies they are ideal for, which companies already use them, and why the tools are worth your time. Are you shouting "alleluia" yet?

Here's a look at some of the tools on the list: Task: Listen to conversations about your brand, competitors or keywords. 10 Vital Elements Of A Perfect Infographic Design. I have covered the topic of why infographics are such a great way to present information to people. 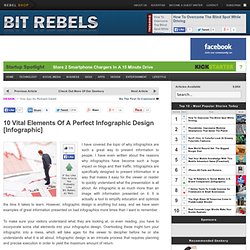 I have even written about the reasons why infographics have become such a huge impact on blogs and their traffic. Infographics are specifically designed to present information in a way that makes it easy for the viewer or reader to quickly understand what the presentation is all about. An infographic is so much more than an image with information presented on it. It is actually a tool to simplify education and optimize the time it takes to learn. iPad App mem:o Is A Simple Data Visualization Tool For Design Lovers. Technology makes it easy to turn the minutiae of our daily lives into useful data sets, but sometimes it feels bleak seeing every experience or memory broken down into pie charts and bar graphs. mem:o is a unique visualization tool that takes life-logging beyond spreadsheets by transforming data into striking images influenced by Dutch graphic design. 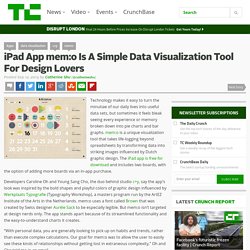 The iPad app is free for download and includes two boards, with the option of adding more boards via an in-app purchase. Developers Caroline Oh and Young Sang Cho, the duo behind studio c+y, say the app’s look was inspired by the bold shapes and playful colors of graphic design influenced by Werkplaats Typografie (Typography Workshop), a masters program run by the ArtEZ Institute of the Arts in the Netherlands. mem:o uses a font called Brown that was created by Swiss designer Aurèle Sack to be especially legible. But mem:o isn’t targeted at design nerds only.

Twitter. Twitter tools. 21 Startups and 4 Trends You Need to Know Now. Pinterest. The ultimate guide to social media tools. Who’s winning the race in social media? Monthly active users by the numbers [Chart] Instagram announced Thursday that it’s hit 90 million monthly active users, finally releasing the metric that most people look to in evaluating the reach of a particular website or app. 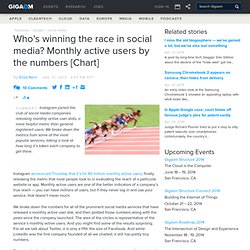 Monthly active users are one of the better indicators of a company’s true reach — you can have millions of users, but if they never log in and use your service, that doesn’t mean much. We broke down the numbers for all of the prominent social media services that have released a monthly active user stat, and then plotted those numbers along with the years since the company launched. The area of the circles is representative of the service’s monthly active users. And you might find some of the results surprising. For all we talk about Twitter, it is only a fifth the size of Facebook. 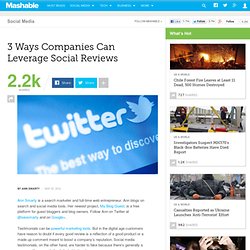 Ann blogs on search and social media tools. Her newest project, My Blog Guest, is a free platform for guest bloggers and blog owners. Follow Ann on Twitter at @seosmarty and on Google+. Testimonials can be powerful marketing tools. But in the digital age customers have reason to doubt if every good review is a reflection of a good product or a made up comment meant to boost a company’s reputation. In fact, collecting and re-posting positive social media reviews not only shines a credible light on a company but may actually help search results for the brand and promote the company's biggest supporters. 1. How to Talk Social Media to Big Wigs. Social media managers often lament over having to discuss social media with high-level executives who just don’t get it — or think they do, since they have a Facebook profile. 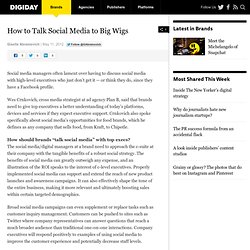 Wes Crnkovich, cross media strategist at ad agency Plan B, said that brands need to give top executives a better understanding of today’s platforms, devices and services if they expect executive support. Crnkovich also spoke specifically about social media’s opportunities for food brands, which he defines as any company that sells food, from Kraft, to Chipotle. How should brands “talk social media” with top execs? Tumblr Has an Official Analytics Tool. Tumblr is one step closer to building an advertising business within the cozy blogging community known for single-subject blogs and animated pictures. 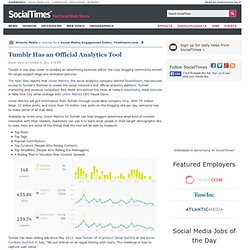 Union Metrics will pull information from Tumblr through social data company Gnip. Sign up. A Quick Guide to Using Tumblr for Business. Although you may already feel overwhelmed by the growing number of social media sites, free micro-blogging platform Tumblr can be a powerful tool for spreading awareness about your brand. 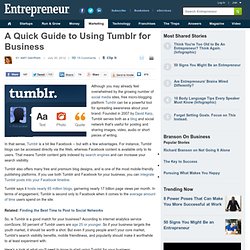 Founded in 2007 by David Karp, Tumblr serves both as a blog and social network that's useful for posting and sharing images, video, audio or short pieces of writing. In that sense, Tumblr is a bit like Facebook -- but with a few advantages. For instance, Tumblr blogs can be accessed directly via the Web, whereas Facebook content is available only to its users. That means Tumblr content gets indexed by search engines and can increase your search visibility. About Spredfast. ReadyPulse: A social content marketing platform that features your customers' most influential photos, videos and testimonials right where they should be: on your website.

To do this, simply put your client’s name into the “search query” field, leave the result type set to “everything” and then fill out the rest of the form to create an alert. Depending on what you selected from the “how often” dropdown, this simple alert could send you an email every time Google indexes a page that contains your client’s name. This is by far the most basic form of a Google Alert that most people might be familiar with. Why Google Alerts is the most effective free marketing tool. You’ve probably heard of Google Alerts, which sends email alerts about any topic you want. 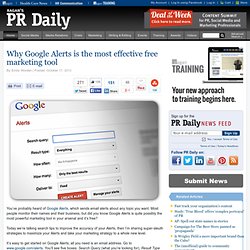 Most people monitor their names and their business, but did you know Google Alerts is quite possibly the most powerful marketing tool in your arsenal and it’s free? Today we’re talking search tips to improve the accuracy of your Alerts, then I’m sharing super-sleuth strategies to maximize your Alerts and take your marketing strategy to a whole new level. It’s easy to get started on Google Alerts; all you need is an email address. Go to www.google.com/alerts. What is Storify, and how can PR pros use it? Just as marketing and PR pros are getting used to Tumblr and Pinterest as part of their social strategy, here comes another platform to confound you. If you haven’t already started using Storify, now is as good a time as any to sign up and see how this social media site will change the game (yet again). Storify lets you curate the best tweets, photos, links, and posts about a particular subject and plug it into an easily consumable “social story.”

Think of it simply as telling a story through the useful things you find online (as opposed to the mindless chatter). The Storify editor enables you to search social media networks and the Web to find all the buzz about the topic you’re addressing. Storify · Create engaging social stories. Percolate! What is Outbrain? P. Reyhan, Digital Content at Allstate "I think of Outbrain the same way I think of a bag of my favorite tortilla chips.