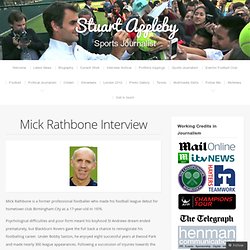 Psychological difficulties and poor form meant his boyhood St Andrews dream ended prematurely, but Blackburn Rovers gave the full back a chance to reinvigorate his footballing career. Under Bobby Saxton, he enjoyed eight successful years at Ewood Park and made nearly 300 league appearances. Following a succession of injuries towards the end of his Rovers career, the club allowed the defender to leave and join Preston North End in 1987. However, Rathbone’s injury curse soon struck again, and despite enjoying a brief spell at Halifax Town (as a player and latterly caretaker manager) he opted to pursue his interest outside of football upon retirement, physiotherapy. Rathbone linked up with Moyes again at Everton and became the club’s Head of Sports Science, spending eight years in all with the Toffees. Interview Transcript “It was a magical day.

10 Celebrities Who Could Have Been Footballers : Betfair Football. They might have been footballers. These days, being a professional footballer is all-consuming. 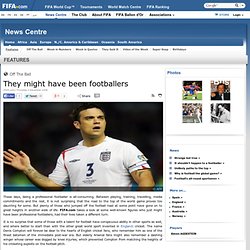 Between playing, training, travelling, media commitments and the rest, it is not surprising that the road to the top of the world game proves too daunting for some. But plenty of those who jumped off the football road at some point have gone on to great heights in another walk of life. FIFA.com takes a look at some well-known figures who just might have been professional footballers, had their lives taken a different turn. It is no surprise that some of those with a talent for football have conspicuous ability in other sports as well, and where better to start than with the other great world sport invented in England: cricket.

The name Denis Compton will forever be dear to the hearts of English cricket fans, who remember him as one of the finest batsmen of the immediate post-war era. If football is the thinking person's sport, you might expect that some deep thinkers dabbled in football in their youth. Top 10 Soccer Movies. A bona fide British classic, this early-1980s paean to love and soccer (in that order) centers on the titular Gregory (charmingly played by John Gordon Sinclair), a 16-year-old literally outgrowing his jersey while dealing with every adolescent issue under the Scottish sun. 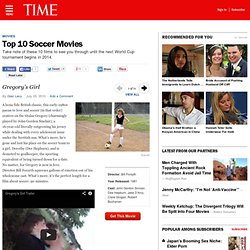 What’s more, he’s gone and lost his place on the soccer team to a girl, Dorothy (Dee Hepburn), and is demoted to goalkeeper, the sporting equivalent of being turned down for a date. No matter, for Gregory is now in love. Top 10 Soccer Movies. Once in a Lifetime: The Extraordinary Story of the New York Cosmos. A bona fide British classic, this early-1980s paean to love and soccer (in that order) centers on the titular Gregory (charmingly played by John Gordon Sinclair), a 16-year-old literally outgrowing his jersey while dealing with every adolescent issue under the Scottish sun. 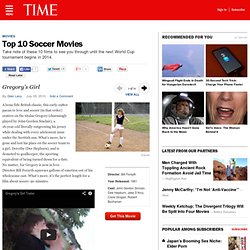 What’s more, he’s gone and lost his place on the soccer team to a girl, Dorothy (Dee Hepburn), and is demoted to goalkeeper, the sporting equivalent of being turned down for a date. No matter, for Gregory is now in love. Director Bill Forsyth squeezes gallons of emotion out of his wholesome cast. What’s more, it’s the perfect length for a film about soccer: 90 minutes. Le ballon d'or. Academies & Development Centres. Many children enter football with aspirations of becoming a professional footballer and with their role models being readily available on TV, newspapers and computer games, there is no hiding from the status this brings. 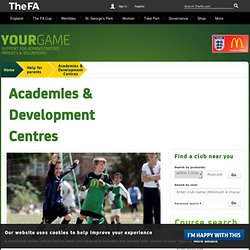 For children playing the game at a younger age, this ladder starts with a step into the world of Academies and Centres of Excellence (CoE), run locally by Professional Clubs. All Professional Clubs, as part of their position within the Football League or Premier League, are required to run a youth development programme from U9s offering talented boys the pathway to become a professional player.

For girls, there are a number of Clubs that also offer this pathway, and offer an excellent standard of football from U10’s. The ProcessSo, what happens and how does the process work? Football academies: kicking and screaming. How to become a professional footballer. Want to be a football pro? You've probably dreamt of winning the Premiership, scoring the winning goal in the Cup final or leading your country at the World Cup. 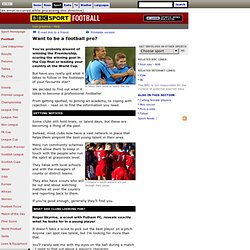 But have you really got what it takes to follow in the footsteps of your favourite star? We decided to find out what it takes to become a professional footballer. From getting spotted, to joining an academy, to coping with rejection - read on to find the information you need. Some clubs still hold trials, or talent days, but these are becoming a thing of the past. Instead, most clubs now have a vast network in place that helps them pinpoint the best young talent in their area. Many run community schemes which allow them to keep in touch with the people who run the sport at grassroots level. They liaise with local schools and with the managers of county or district teams. They also have scouts who will be out and about watching matches all over the country and reporting back to them. If you're good enough, generally they'll find you.