Project UAVs for Landmine Detection - Find a Better Way. A better way to detect landmines. "I'd been to Cambodia. 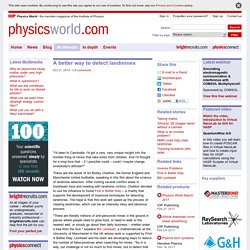 I'd got a very, very unique insight into the horrible thing of mines that take limbs from children. And I'd thought for a long time that – if I possible could – could I maybe change everybody's attitude? " These are the words of Sir Bobby Charlton, the former England and Manchester United footballer, speaking in this film about the science of landmine detection. After visiting several conflict areas in Southeast Asia and meeting with landmine victims, Charlton decided to use his influence to found Find A Better Way – a charity that supports the development of improved techniques for detecting landmines. The hope is that this work will speed up the process of clearing landmines, which can be an intensely risky and laborious process. For example, it is common for landmine clearance teams to use metal detectors to locate the firing pin and metal percussion caps present in many landmines.

Problems and Solutions. Bart Weetjens: How I taught rats to sniff out land mines. Meet the Giant Rats That Are Sniffing out Landmines. African giant pouched rats—huge, cat-size rodents native to central Africa—have bad vision but an extraordinary sense of smell. 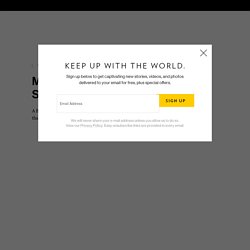 This makes them perfect candidates for discovering hidden landmines by sniffing out the explosive TNT. Even decades after conflict, explosive remnants of war linger in the earth, maiming and killing thousands of people who stumble across them each year. In 2013, mines and other buried explosives caused 3,308 casualties worldwide—down from 4,325 in 2012, according to the 2014 Landmine Monitor report.

Finding these hidden explosives is challenging and dangerous: People with metal detectors not only risk their lives, they work slowly, stopping to investigate every suspicious ping. Trained dogs, while commonly used, are expensive and tough to transport. Enter APOPO, a Belgian nonprofit that has created an army of TNT-sniffing African giant pouched rats. Training the rats to sniff out landmines isn’t easy, though. Meet the Giant Rats That Are Sniffing out Landmines. 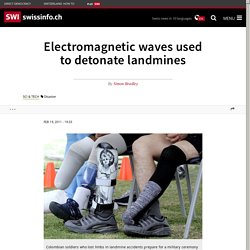 IEDs, so-called roadside bombs, kill and mutilate hundreds of thousands of people every year in conflict zones in countries including Colombia, Afghanistan “Colombia has one of the highest mine casualty rates in the world,” Nicolas Mora, a Colombian postgraduate research student at the Federal Institute of Technology in Lausanne (EPFL), told swissinfo.ch. “IEDs are installed by guerrillas to stop the army from moving forward. They are typically placed on jungle roads but these are places where people are living, going to school or hospital.” Between 2005-2010 in Colombia, roadside bombs and unexploded ordinance killed 1,000 people annually; a third of the victims were civilians.

New technology for land mine detection. In Colombia, large areas are teeming with mines that are almost impossible to detect with traditional methods. 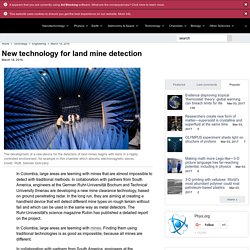 In collaboration with partners from South America, engineers at the German Ruhr-Universität Bochum and Technical University Ilmenau are developing a new mine clearance technology, based on ground penetrating radar. In the long run, they are aiming at creating a handheld device that will detect different mine types on rough terrain without fail and which can be used in the same way as metal detectors. The Ruhr-Universität's science magazine Rubin has published a detailed report on the project. In Colombia, large areas are teeming with mines. Finding them using traditional technologies is as good as impossible, because all mines are different.

Land mines almost impossible to detect with traditional methods Even though Colombia has not experienced any military conflicts, many areas are teeming with land mines which had been laid by guerrilla forces and members of drug cartels. Callum Cooper. EMIS for Clearing Landmines.