The Links between the Dragonborn and Odin-An Essay. Yeah, this is the reason I’ve not updated for a wee while; I’ve been saving up a huge post for you all and proved that I’m a massive, massive nerd. 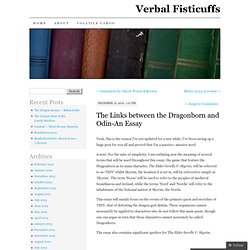 A note: For the sake of simplicity, I am outlining now the meaning of several terms that will be used throughout this essay; the game that feature the Dragonborn as its main character, The Elder Scrolls V: Skyrim, will be referred to as ‘TESV’ whilst Skyrim, the location it is set in, will be referred to simply as ‘Skyrim’. The term ‘Norse’ will be used to refer to the peoples of medieval Scandinavia and Iceland, while the terms ‘Nord’ and ‘Nordic’ will refer to the inhabitants of the fictional nation of Skyrim, the Nords.

This essay will mainly focus on the events of the primary quest and storyline of TESV, that of defeating the dragon-god Alduin. These arguments cannot necessarily be applied to characters who do not follow this main quest, though one can argue in turn that these characters cannot accurately be called Dragonborn. Conclusion. Spillpikene.no. I disse tider, hvor alle andre spillinteresserte koser seg med Diablo III, har jeg endelig somlet meg til å besøke Skyrim-provinsen. 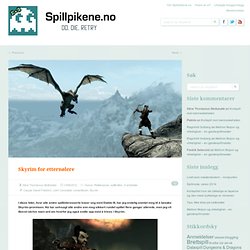 “Vandreren over tåkehavet” av C. Mektig natur; lite, sårbart menneske Jeg føler meg av og til ganske liten og sårbar i den store, digitale verden – til tross for våpen, rustning og magi. “I used to be an adventurer like you..” The Men Who Stare At Mountains. "Our imagination loves to be filled with an object, or to grasp at anything that is too big for its capacity. 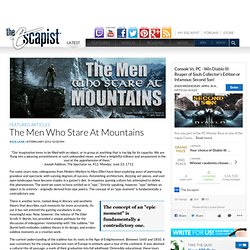 We are flung into a pleasing astonishment at such unbounded views, and feel a delightful stillness and amazement in the soul at the apprehension of them. " - Joseph Addison, The Spectator no. 412. Monday, June 23, 1712 For some years now, videogames from Modern Warfare to Mass Effect have been exploring ways of portraying grandeur and spectacle, with varying degrees of success. Astonishing architecture, dizzying set-pieces, and vast open landscapes have become staples in a gamer's diet. In response, gaming culture has attempted to define this phenomenon.

The concept of an "epic moment" is fundamentally a contradictory one. There is another term, rooted deep in literary and aesthetic theory that describes such moments far more accurately. Video game aficionado: Echoes of the Sublime in Skyrim's Landscape Art - Part 4. The (Roman) Roads of Skyrim. Through its expansion across Mediterranean Sea and into northern Europe, the Roman Empire left its indelible mark on Western civilization. 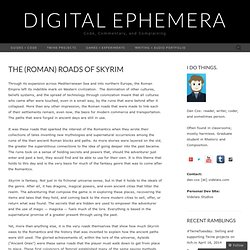 The domination of other cultures, beliefs systems, and the spread of technology through colonization meant that all cultures who came after were touched, even in a small way, by the ruins that were behind after it collapsed. More than any other impression, the Roman roads that were made to link each of their settlements remain, even now, the basis for modern commerce and transportation. The paths that were forged in ancient days are still in use. It was these roads that sparked the interest of the Romantics when they wrote their collections of tales inventing new mythologies and supernatural occurrences among the ruins of the then ancient Roman blocks and paths. The Modern Sublime? Gaming and the Romantic Imagination. Perhaps the best-known definition of the sublime is from Edmund Burke's 1757 work A Philosophical Enquiry into the Origin of Our Ideas of the Sublime and Beautiful. 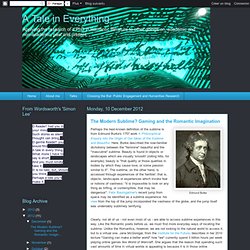 Here, Burke described the now-familiar dichotomy between the "feminine" beautiful and the "masculine" sublime. Beauty is found in objects or landscapes which are visually 'smooth' (rolling hills, for example); beauty is "that quality or those qualities in bodies by which they cause love, or some passion similar to it". Romanticism of Entertainment. If you have ever finished a video game, manga series, anime show, TV series, or book (series), chances are at one point in your life you wished that the settings, as well as the characters, were real. 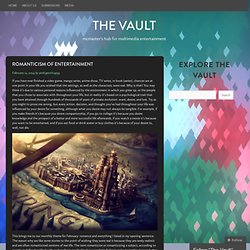 Why is that? You may think it’s due to various personal reasons influenced by the environment in which you grew up, or the people that you chose to associate with throughout your life, but in reality it’s based on a psychological trait that you have attained through hundreds of thousands of years of primate evolution: want, desire, and lust. Try as you might to prove me wrong, but every action, decision, and thought you’ve had throughout your life was influenced by your desire for something, although what you desire may not always be tangible. This brings me to our monthly theme for February- romance and everything I listed in my opening sentence.