SideQuest for Oculus Quest: Everything You Need To Know. Here’s everything you need to know about SideQuest, one of the most useful tools for advanced Oculus Quest users. 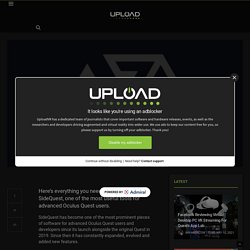 SideQuest has become one of the most prominent pieces of software for advanced Oculus Quest users and developers since its launch alongside the original Quest in 2019. Since then it has constantly expanded, evolved and added new features. Gabe Newell says brain-computer interface tech will allow video games far beyond what human 'meat peripherals' can comprehend. The head of US gaming company Valve Corporation says a future is fast approaching where video games will use data from people's brain signals to adjust the experience they get — and even a future where people's minds can be adjusted by computers. 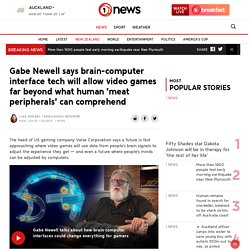 Your playlist will load after this ad The head of Valve Corporation talks about BCIs in an extended interview. Source: 1 NEWS. AR and VR should be booming. So why aren't we interested? The COVID-19 virus is forcing entire populations to stay confined at home, forcing them to find new ways to work and socialize. 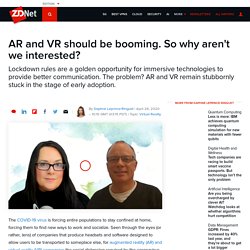 Seen through the eyes (or rather, lens) of companies that produce headsets and software designed to allow users to be transported to someplace else, for augmented reality (AR) and virtual reality (VR) companies the social distancing required by the coronavirus sounds more like an opportunity to show what they can do to help, than a looming threat to their businesses. Certainly, many players in the mixed reality space are already jumping in to offer their services. In the UK, software company PTC is using Microsoft's HoloLens to offer training content in factories, so that producers can fast-track the learning process to build ventilators for the NHS.

After training 14,000 health workers in the US, AR/VR startup Virti is launching programs for 15,000 NHS nurses and doctors to help them cope with the increase in coronavirus cases. Oculus Quest 2 Mixed Reality Capture Tool. Smart glasses follow our eyes, focus automatically. Though it may not have the sting of death and taxes, presbyopia is another of life’s guarantees. 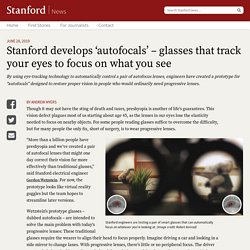 This vision defect plagues most of us starting about age 45, as the lenses in our eyes lose the elasticity needed to focus on nearby objects. For some people reading glasses suffice to overcome the difficulty, but for many people the only fix, short of surgery, is to wear progressive lenses. Stanford engineers are testing a pair of smart glasses that can automaticallyfocus on whatever you’re looking at. (Image credit: Robert Konrad) “More than a billion people have presbyopia and we’ve created a pair of autofocal lenses that might one day correct their vision far more effectively than traditional glasses,” said Stanford electrical engineer Gordon Wetzstein.

Autofocus eyewear by Laclarée for 2022. Centre for Vision in the Developing World - About Us. The developing world cannot yet support the conventional optical industry's business model: a highly trained eye care professional who uses expensive equipment to find a customer's prescription, who selects from dozens of different strength lenses to make a custom pair of glasses, and who sells the final product to the customer for a large profit margin. 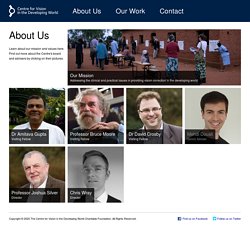 CVDW develops scalable, sustainable solutions based on Joshua Silver's pioneering work on self-refraction using adaptive spectacles: a single product that can be adjusted by the wearer following simple instructions to give high quality vision correction at low cost. Self-refraction supports a business model or humanitarian or government distribution model that relies on the simplest possible logistics and minimal technical skill, enabling entrepreneurs, humanitarian organisations and governments to develop marketing and distribution strategies that fit the local social and economic context. 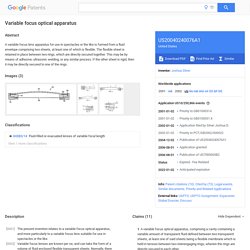 The first ring 106, with the membranes 102, 104 attached, is positioned inside a second ring 108. US5371629A - Non-circular variable focus lens. This invention relates to variable focal length lenses. 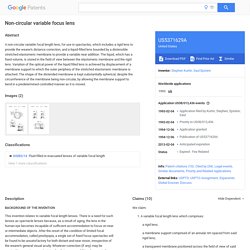 There is a need for such lenses as spectacle lenses because, as a result of aging, the lens in the human eye becomes incapable of sufficient accommodation to focus on near or intermediate objects. US7675686B2 - Fluidic adaptive lens. This application claims the benefit of U.S. provisional patent application No. 60/558,293 entitled “Fluidic Adaptive Lens” filed on Mar. 31, 2004, which is hereby incorporated by reference herein. 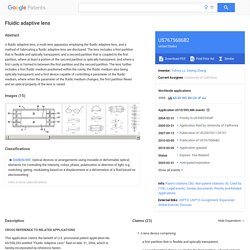 This invention was made with United States Government support awarded by the following agencies: Defense Advanced Research Projects Agency (DARPA) Grant No. F49620-02-1-0426; and Air Force Office of Scientific Research (AFOSR) Grant No. F49620-02-1-0426. The United States Government has certain rights in this invention. The present invention relates to optical lenses and more particularly relates to vision correction lenses and zoom lenses such as are employed in various optical systems. US5999328A - Liquid-filled variable focus lens with band actuator. Liquid-filled variable focus lenses wherein one or both lens surfaces are caused to change shape by a change in liquid pressure have been known for over a century. 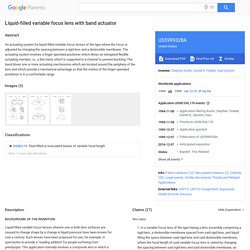 Such lenses have been proposed for use, for example, in spectacles to provide a "reading addition" for people suffering from presbyopia. This application normally involves a composite lens in which a person's distance prescription (if any) is provided by a conventional rigid plastic or glass lens, and a variable additional power is provided by a liquid-filled lens. Three diopters is the theoretical maximum amount of added optical power needed to move the focal point of a spectacle lens from infinity to reading distance.

US20090213471A1 - Variable focus lens. An ambitious vision, a global cure. Left uncorrected, poor vision can stunt reading skills and hinder prospects - a prevalent problem in the developing world where there is a lack of eyecare professionals. 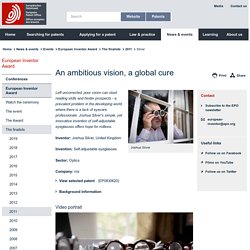 Fluid-Filled, Adjustable Eye-Glasses. I wear glasses. I like them. I like how they look, and I like that they stop me poking things in my eye. Apple VR headset may use fluid-filled lenses to counter a user's bad eyesight. An Apple VR or AR headset may be able to automatically adjust the lenses placed in front of the user's eyes by using fluids to deform the shape of the lens to improve the user's eyesight. The fundamental part of augmented reality and virtual reality is that the user must be able to see the virtual content. Given this typically involves the use of a display very close to the user's eyes, a position that may be hard to focus on for long periods of time, VR headset producers use optical lenses positioned between the eyes and the screen, adjusting the perceived focal distance for the user and making it more comfortable to look at. Modern systems include mechanisms to adjust the way the lenses function for the user, such as changing the distance between the lenses to match the user's pupillary distance or the distance the lenses are from the eyes.

Apple VR headset may use Fluid filled lenses that can help users with bad eyesight – Droid News. While there have been multiple rumors regarding an Apple AR/VR headset and its features, a recent report states that it might sport fluid filled lenses that will allow it to also work for users with bad eyesight. According to an AppleInsider report, the Cupertino based giant’s augmented reality/virtual reality headset might feature fluids that can deform to the shape of lens to help improve the eyesight of the user. In either an AR or VR headset, the integral aspect is the ability to see the virtual content. However, since a headset will generally have the display at a close proximity of the users’ eye, which might cause discomfort overtime. Generally, a VR headset uses optical lenses positioned between the eyes and the screen, so being able to adjust the perceived focal distance for the user might make it more comfortable to use.

At the moment, the technology used generally would have the lenses shift distances from the user to change the perceived focal length. These "Smart Glasses" Adjust To Your Vision Automatically. By age 45, most of us will need glasses at least for reading. That’s because our eyes’ ability to accommodate—to change focus to see objects at different distances—degrades with age. In young eyes, the eyeball’s crystalline lens changes shape easily, allowing this accommodation. But as we get older, this lens stiffens. Objects in close range suddenly look blurry.

Hence the “readers” most middle-aged adults begin wearing on a chain or tucking in a handbag, or the bifocals worn by those who already had vision problems. But the days of popping reading glasses on and off or constantly shifting your gaze through bifocals may be numbered. “The major advantage of these smart eyeglasses is that once a person puts them on, the objects in front of the person always show clear, no matter at what distance the object is,” says Carlos Mastrangelo, the electrical and computer engineering professor who led the research along with doctoral student Nazmul Hasan.

Note that the same lens can have both positive or negative curvature. Making a Liquid Lens from Scratch — Jan Hemstad. Low‐cost homemade liquid‐lens refractometer: The Physics Teacher: Vol 34, No 5. The LomoMod No.1 Cardboard Camera Comes with a Crazy 'Liquid-Filled Lens' FINAL CorningVariopticLenses productbrochure 5.4.18 lowresWEB. ® Varioptic® Lenses (Variable and Autofocus Lenses) (251) Experimenting with a liquid lens and driver IC. DIY Adjustable Focal Length Fluid Lens : 15 Steps (with Pictures) - Instructables. Before we get started, lets first we need a bit of background about optics! Adjustable Glasses: Adlens and Eyejusters. Adjustable Glasses: Adlens and Eyejusters. 5G and face tracking: The weird future of VR headsets like Oculus Quest and HoloLens. The-power-of-mixed-reality-with-the-hololens-2.

Oppo will launch AR glasses with gesture control in 2021. Oppo has shown off some neat concepts in the past, ranging from a waterfall display to a hidden selfie camera in the screen. StereoPi V2 Will Use New Raspberry Pi Compute Module 4. IMAX Theatre In Your Sunglasses by Godview Tech. Panasonic’s VR glasses look like a steampunk virtual reality revelation – TheSixthAxis. CES is the time of year where companies big and small flock to Las Vegas to show off their latest technological marvels, and Panasonic have unveiled some VR glasses that could revolutionise how we can immerse ourselves in virtual reality.

Microsoft HoloLens 2 adds 5G support and is getting easier to buy. Oculus Quest Hand-Tracking Get Full Release, Games Coming Soon. Oculus Quest games are getting controller-free hand tracking this month. Oculus Quest Now Works On Rift & SteamVR With The Cable In The Box. No $80 Cable Needed: Oculus Quest Link Works Out of the Box!