ROMACEN – Vremea vrăjitoarei – Giuvlipen. Hopepunk and the New Science of Stress. When I first saw encountered the term “hopepunk,” I felt an immediate sense of recognition. 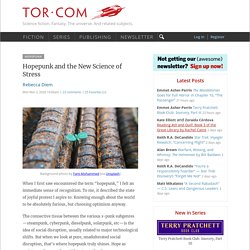 The First Scientific Utopia Still Matters 400 Years Later. The U.S. Military Is Turning to Science Fiction to Shape the Future of War. In 2030, a severe drought triggers a refugee crisis, which in turn sparks a war between two African nations. 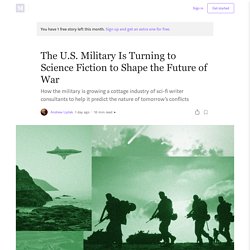 The UN steps in, deploying U.S. and French soldiers to keep the borders secure. An information warfare specialist is sent in when a disinformation campaign depicts U.S. forces destroying religious sites and infecting refugees with tainted vaccines and moves to help mitigate attacks from state actors looking to destabilize the region. Just as support for intervention in the conflict erodes in the United States, violence begins to rise, and the team is forced to work quickly to prevent the crisis from growing into a larger conflict. The world is finally coming around to Starship Troopers.

The Verge is a place where you can consider the future. 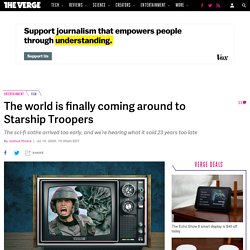 So are movies. In Yesterday’s Future, we revisit a movie about the future and consider the things it tells us about today, tomorrow, and yesterday. The movie: Starship Troopers (1997) Introduction to Speculative Design Practice – Speculative. Discursive and Critical Design Practice From the modernist perspective, design has been primarily regarded as a problem-solving practice, usually dealing with problems detected by other professions. 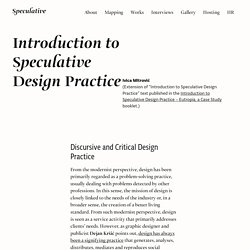 In this sense, the mission of design is closely linked to the needs of the industry or, in a broader sense, the creation of a better living standard. From such modernist perspective, design is seen as a service activity that primarily addresses clients’ needs. Speculative Everything. Designers are usually seen as problem solvers. 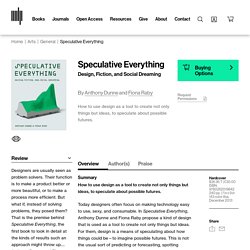 Their function is to make a product better or more beautiful, or to make a process more efficient. But what if, instead of solving problems, they posed them? Brave New World: First trailer for Peacock's new sci-fi dystopia series. The Protocols of Science Fiction. A conversation on a 1996 Internet newsgroup questioned the existence of science-fiction reading protocols. 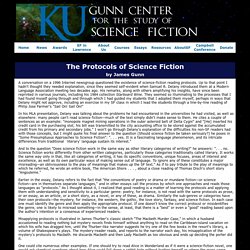 Up to that point I hadn't thought they needed explanation, since they seemed self-evident when Samuel R. Delany introduced them at a Modern Language Association meeting two decades ago. His remarks, along with others amplifying his insights, have since been reprinted in various journals, including his 1984 collection Starboard Wine.

The sci-fi series on Hulu everyone's raving about. If you've yet to join the growing sect of Devs fandom, there really is no time like the present. 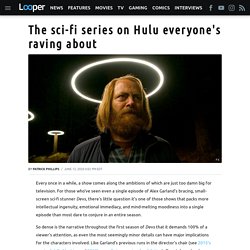 We can confirm beyond doubt that the critically praised series is every bit as viscerally thrilling and emotionally satisfying as the rest of Alex Garland's striking sci-fi output, a list that includes 28 Days Later, Never Let Me Go, and Sunshine, all of which he penned. As with the best modern television shows, Devs fully fits into the binge-worthy mold, so don't be surprised if you devour the entire series in a single sitting once you get going. It might be a good idea to pace yourself if you're really digging the mystery box drama, though, because once you finish Devs' Earth-shattering finale, there's apparently no more story to tell. Intl.startrek. For a fleeting moment during the season finale of Star Trek: Picard, we see Seven of Nine, aka Annika Hansen, take Raffi's hand in hers. 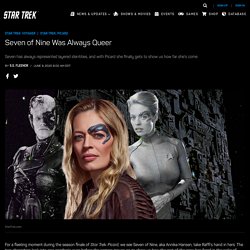 The two characters look into one another's eyes before the camera moves on to show us how the rest of the crew has fared in the wake of their battle with and for the synthetic lifeforms against the Romulan Tal Shiar. Star Trek fans took that small moment of queer acknowledgement and ran with it—and who can blame us? Getting to see queerness as not subtext, but text on Star Trek took many decades. Future present? How science fiction sees our world in 2050. New York Just over two years ago, when science fiction writer Mary Robinette Kowal took part in a strategic task force looking into a Department of Next at the Museum of Science and Industry in Chicago, it didn’t take long for her to realize why she’d been asked to attend. 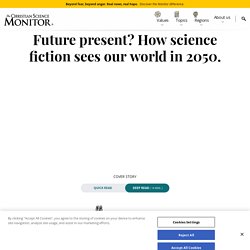 Faced with flat attendance and the pressure to remain relevant in an entertainment-saturated world, the museum was looking to inject a sense of urgency into its mission. The board wanted to reposition the 84-year-old institution as “a futurist and provocateur,” as president and CEO David Mosena put it at the time. Exhibits moving forward should include plausible futurescapes and a narrative shape to how human beings might live. Some 50 thinkers participated in the museum’s task force, including scientists, business leaders, and a few other science fiction writers. On the cusp of this new year, 2020, the Monitor invited Ms. And science fiction writers do dabble in notions that sometimes become reality. Mr. Time Travel: I’ll Be Back…to the Future - Predict - Medium. Time travel: It’s the Holy Grail of many a physicist and science fiction writers’ minds. 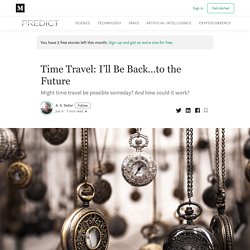 Sci-Fi Has a Somber Lesson for This Crisis.