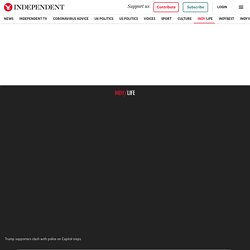 That data has now been scraped and archived by researchers, who could use the data to help identify criminals. Many rioters including the Proud Boys - a Southern Poverty Law Center designated hate group – shared videos on the app, but hacker “@donk_enby” on Twitter has shown that the metadata (information about the content uploaded, such as number of megapixels in the videos or rotation) includes GPS positioning. As such, it is likely that a number of people will have incriminated themselves as being part of the event, with information tying their Parler account to the scenes. The hacker was previously working with academic researchers, helping them ingest Parler data, they told The Independent. INDY/LIFE Newsletter Be inspired with the latest lifestyle trends every week “Bad news. More 3D Printed IKEA Hacks Make Life Better. There’s an old joke that the CEO of IKEA is running to be Prime Minister of Sweden. 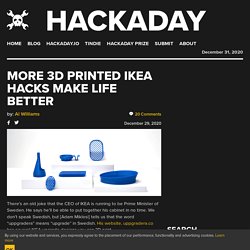 He says he’ll be able to put together his cabinet in no time. We don’t speak Swedish, but [Adam Miklosi] tells us that the word “uppgradera” means “upgrade” in Swedish. His website, uppgradera.co has several IKEA upgrade designs you can 3D print. There are currently six designs that all appear to be simple prints that have some real value. These are all meant to attach to some IKEA product and solve some consumer problem. For example, the KL01 is a cup holder with a clip that snaps into the groove of a KLIPSK bed tray. We worry a little about the safety of the cheese grater and the toothbrush because you will presumably put the cheese and the toothbrush into your mouth.

Honestly, none of these are going to change your life, but they are great examples of how simple things you can 3D print can make products better.

Too often nonprofits think that grants are the Holy Grail. 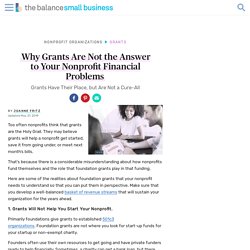 They may believe grants will help a nonprofit get started, save it from going under, or meet next month’s bills. That’s because there is a considerable misunderstanding about how nonprofits fund themselves and the role that foundation grants play in that funding. Here are some of the realities about foundation grants that your nonprofit needs to understand so that you can put them in perspective.

Make sure that you develop a well-balanced basket of revenue streams that will sustain your organization for the years ahead. 1. Primarily foundations give grants to established 501c3 organizations. Founders often use their own resources to get going and have private funders ready to help financially. Fiscal sponsorship is another way some new charities start. But in general, don’t count on grants until your organization is well established and looks like it is going to be able to sustain itself. 2. 3. 4.

Grants are “soft” money. 5. 6. Jose Ramos on Cosmo-Localization. Podcast via Jose Ramos: "I was recently given an opportunity to give a presentation at the Local Lives – Global Matters Conference in Castlemaine, Vic, where I pitched the idea of “Cosmo-localization”. 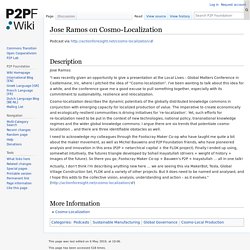 I’ve been wanting to talk about this idea for a while, and the conference gave me a good excuse to pull something together, especially with its commitment to sustainability, resilience and relocalization. Cosmo-localization describes the dynamic potentials of the globally distributed knowledge commons in conjunction with emerging capacity for localized production of value. The imperative to create economically and ecologically resilient communities is driving initiatives for ‘re-localization’. I need to acknowledge my colleagues through the Footscray Maker Co-op who have taught me quite a bit about the maker movement, as well as Michel Bauwens and P2P Foundation friends, who have pioneered analysis and innovation in this area (P2P + netarchical capital + the FLOK project).