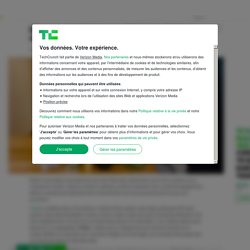 What Are Community Development Financial Institutions? Many or all of the products featured here are from our partners who compensate us. 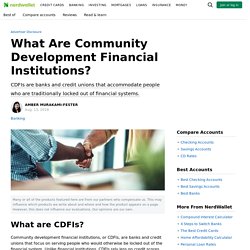 This may influence which products we write about and where and how the product appears on a page. SpaceX Starlink: here's how much it will cost to subscribe. Starlink could offer super-fast broadband internet to the most remote areas of the world – but the details of SpaceX's plan remain somewhat obscure. 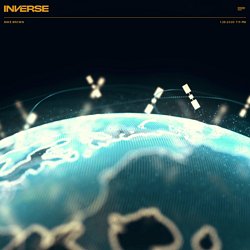 Elon Musk envisions a constellation of thousands of satellites at relatively low altitude, providing responsive and high-speed internet access. Will the Banks Collapse? After months of living with the coronavirus pandemic, American citizens are well aware of the toll it has taken on the economy: broken supply chains, record unemployment, failing small businesses. 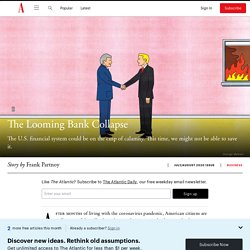 All of these factors are serious and could mire the United States in a deep, prolonged recession. But there’s another threat to the economy, too. Small towns, big change — High Country News – Know the West. Small towns, big change. Carbon capture, tool against climate change, just got cheaper. Carbon capture, the fossil-fuel industry’s favorite weapon against climate change, has never really caught on because of the cost. 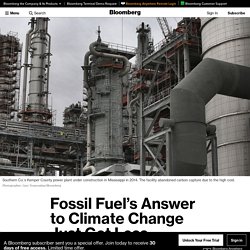 That may be about to change. The Internal Revenue Service recently issued crucial guidance to help developers take advantage of tax credits for the systems, and supporters say it could usher in a new era for the controversial technology. “It’s the make-or-break financial element,” said Peter Mandelstam, chief operating officer for Enchant Energy Corp., which is preparing to install a carbon-capture system at a coal-fired power plant near Farmington, New Mexico. My White Friend Asked Me on Facebook to Explain White Privilege. I Decided to Be Honest - Yes! Magazine. Yesterday I was tagged in a post by an old high school friend asking me and a few others a very public, direct question about white privilege and racism. 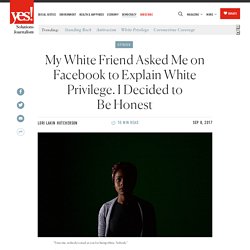 I feel compelled not only to publish his query, but also my response to it, as it may be a helpful discourse for more than just a few folks on Facebook. Violence Never Works? Really? - Tim Wise - Medium. The moralizing has begun. 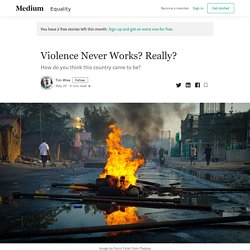 Be peaceful, they implore, as protesters rise up in Minneapolis and across the country in response to the killing of George Floyd. This, coming from the same people who melted down when Colin Kaepernick took a knee — a decidedly peaceful type of protest. InnovateNC: A Cross-City Learning Collaborative – Institute for Emerging Issues. Renewables surpass coal in US energy generation for first time in 130 years. Solar, wind and other renewable sources have toppled coal in energy generation in the United States for the first time in over 130 years, with the coronavirus pandemic accelerating a decline in coal that has profound implications for the climate crisis. 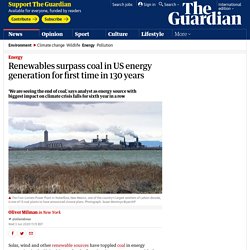 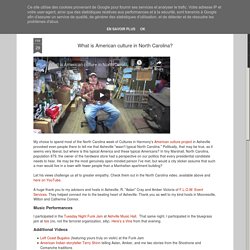 " Politically, that may be true, as it seems very liberal, but where is this typical America and these typical Americans? In tiny Marshall, North Carolina, population 879, the owner of the hardware store had a perspective on our politics that every presidential candidate needs to hear. (87) What is American culture in North Carolina? Filene Research Institute. Future of credit unions. A Look Into the Future: What Will Credit Unions Be Like in 25 Years? Wouldn't all of our jobs be easier if we could look into a crystal ball? 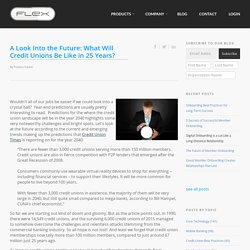 Year-end predictions are usually pretty interesting to read. Predictions for the where the credit union landscape will be in the year 2040 highlights some very noteworthy challenges and bright spots. Let's look at the future according to the current and emerging trends making up the predictions that Credit Union Times is reporting on for the year 2040: "There are fewer than 3,000 credit unions serving more than 150 million members. Credit unions in 2030. Jake Dunagan makes a living predicting the future. He presented two futuristic scenarios for credit unions during the 2019 CUNA Lending Council Conference Monday in New Orleans. Dunagan, director of the Governance Futures Lab at the Institute for the Future, examines “urgent” future issues using a continuous “foresight/insight/action” process. He says this process is an excellent strategic planning tool.

“This is a skill set you need to cultivate,” he says. Is This the Future of Credit Unions? - THINK. Anthony Jenkins, former group CEO of Britain’s biggest bank, Barclays, predicts a future wherein financial technology, led by innovations such as blockchain, will severely disrupt the current banking system. The former executive predicts those employed in banking institutions will be reduced by at least 20 percent in the coming decade, if not up to as much as 50 percent. Sure, there will be losers in the digital revolution, but we would argue that the most forward-looking credit unions will not only survive the disruption; they will thrive and prosper. Credit unions have major advantages over fintech disruptors.

Massive Forces Impacting the Future of Bank & Credit Union Branches. Subscribe to The Financial Brand via email for FREE! In the telecommunications/media world millions have “cut the cable,” canceling or not renewing their cable television contract. Instead, they get their news and entertainment over the internet, increasingly using streaming technology, often live. It’s an apt analogy for financial institutions. In banking, millions of consumers have given up the weekly or even monthly trip to their nearby branch, preferring to use a combination of website or mobile applications — not to mention ATMs — to handle the majority of routine banking needs, and increasingly some less-than-routine needs such as taking out a loan. The Future of Credit Unions Depends on the Next Generation of Leaders. Source: Rawpixel.com/Shutterstock The Cooperative Trust and Crash program has been around for nearly 11 years.

In the last decade, we’ve witnessed the evolution and growth of this community with an increase in community reach and impact – we have nearly 2,000 online community members and brought 231 emerging leaders to industry conferences in 2019. We’ve seen organizational changes and reaped the benefits of the leadership of Brent Dixon, James Marshall and Lauren Culp, who, through their collective efforts, have made The Cooperative Trust (The Trust) a self-funded program at Filene Research Institute.

4 Trends Set to Change Banks and Credit Unions in 2019. As Brett King, CEO and co-founder of Moven and bestselling author, once said, “If you don’t like rapid, earth-shattering change and you work in a bank, you should start looking for a new job in another industry.” The financial sector has never been static—banks and credit unions have long been subject to disruptive technologies, shifts in government regulations and tax codes, inflation rates, economic policies, and more.

Don't let banks undermine the future of credit unions. 2020 Scenarios web. To infinity and beyond: The future of the credit union industry. Serving the underbanked and millennials - Can credit unions be the disruptors? As credit union boards and executives refresh their strategic plans, some will take a similar approach to what bankers are doing. They will focus on growth and market share, driven by improvements to the member experience; investments in mobile technology; talent retention; brand marketing and risk management.

Future of Credit Unions. Trending CUs in 2025 Coleman. 2 Big FinTech Goals for Credit Unions. Technology Financial institutions are no longer just competing among themselves or fintech companies, they’re also grappling with the intrusion of tech giants. According to a 2017 study by Bain & Company, US consumers trust PayPal, Google and Amazon more than their bank or credit union when it comes to money. Future of Credit Unions: The Next 10 Years by Nikhil Lakhanpal — CU Water Cooler. "Future Ready" to Help Credit Unions: Jack Henry & Associates - NCUF. We had the opportunity to attend the 2019 Symitar® Educational Conference (SEC) & TechConnect on September 16-19th in San Diego, California.