Start Sowing Early To Extend Your Growing Season. It is one of the big questions each gardening season – when exactly should you get started? 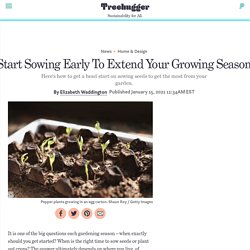 When is the right time to sow seeds or plant out crops? The answer ultimately depends on where you live, of course – and the conditions to be found in your area. What you want to grow is also key to making these decisions. But there are ways to get started with sowing early and extend your growing season, even when you live in a colder climate zone. I begin early in the year, but not outside in the garden. I cannot typically direct sow outdoors until mid-April at the earliest. Sowing Early Indoors Typically, a rule of thumb for short-season gardeners is to sow tomatoes and peppers indoors around six to eight weeks before the last frost date in your area.

But there are a few things to consider when sowing early indoors. First of all, tomatoes and peppers are both warm-season crops. Sowing early indoors does take a little more work than direct sowing. Sowing Early Undercover Sowing Early Outdoors. Fixed Raised Bed. Building a fixed raised bed is the recommended method for installing FarmBot Genesis or Genesis XL outdoors. 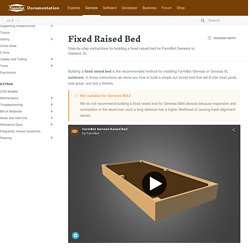 In these instructions we show you how to build a simple but sturdy bed that will fit into most yards, look great, and last a lifetime. We recommend building your raised bed as large as possible to get the most value out of your FarmBot. See the economies of scale section for more information on maximizing FarmBot value. Use the dimension guidelines in the table below to plan your raised bed design. Position the lumber roughly where your bed will be so that you may find out where to dig your post holes. Dig the post holes. Sand the wood to remove any weird markings and splinters. If desired, stain the wood or apply a protective coating of your choice. Setup the lumber upside down on a flat surface. Measure out and mark where the posts will be. Clamp the posts into place, making sure they are square with the bed sides. Mobile Raised Bed. Building a mobile raised bed is the recommended method for installing FarmBot Genesis indoors. 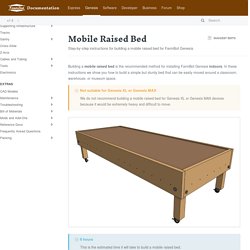 In these instructions we show you how to build a simple but sturdy bed that can be easily moved around a classroom, warehouse, or museum space. Not suitable for Genesis XL or Genesis MAX We do not recommend building a mobile raised bed for Genesis XL or Genesis MAX devices because it would be extremely heavy and difficult to move. 6 hours This is the estimated time it will take to build a mobile raised bed. We recommend building your mobile raised bed as big as it can be for your space, without exceeding the maximum assembled size of the FarmBot. Consider your space In determining how large your bed can be, consider if you will ever need to move the bed from room to room, down any hallways, around any corners, and/or through any doorways.

For FarmBot Genesis kits, the outer width of your bed must not be wider than 1.48m. FarmBot Model Outer Bed Width Outer Bed Length Qty Component $/Unit Subtotal. Growing Our Own - More than a Lifestyle Choice. The story of the Cook and Gardener Partnership is about a community coming together to find a place for all of its residents to contribute to the well being of the community. 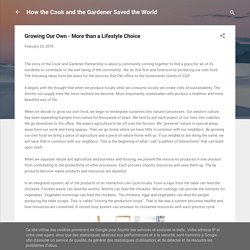 We do that first and foremost by producing our own food. The following ideas form the basis for the services that Pat offers to the homeowner clients of CGP. It begins with the thought that when we produce locally what we consume locally we create cells of sustainability. The shorter our supply lines the more resilient we become. More importantly, sustainable cells produce a healthier and more beautiful way of life. When we decide to grow our own food, we begin to reintegrate ourselves into nature's processes. When we separate nature and agriculture and business and housing, we prevent the resources produced in one process from contributing to the productivity of other processes.

In an integrated system, all of the products of an interaction can cycle locally. There are no experts in what I am writing about. Three Sisters. Three Sisters may refer to: Geography[edit] Australia[edit] Canada[edit] Ireland[edit] South Africa[edit] United Kingdom[edit] United States[edit] Stage and film[edit] Mythology[edit] Gorgons, three sisters in Greek mythology, named Stheno, Euryale, and MedusaGraeae, three grey sisters (witches) in Greek mythology, named Deino, Enyo, and Pemphredo Other uses[edit] See also[edit] 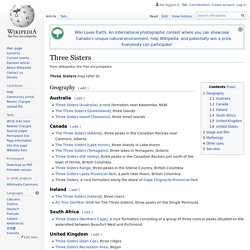