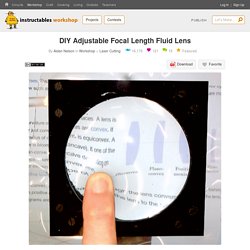 Light changes direction as it moves through different mediums (a phenomenon called Refraction). In lenses, we carefully control the angle at which light passes from one medium (air) into another medium (the glass or plastic material that makes up the lens) and back to focus or otherwise alter the light. Most camera lenses are composed of a number of individual lens elements which work together in groups to correct for various types of aberrations (optical errors) and produce a flat, focused image on the image plane (the camera's sensor).

But if all of the lens elements are of a fixed size and shape, how do camera lenses focus or zoom the image? When a camera lens changes zoom or focus, it moves individual lens elements (or element groups) forwards and backwards with respect to each other inside of the lens. Before we get started, lets first we need a bit of background about optics! Training Wild Birds to Trade Litter for Food. I have trained wild magpies in my garden to trade litter for food! 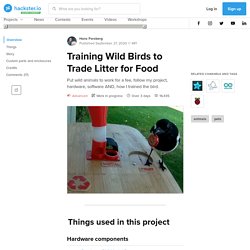 The whole project relies on mechanical design, electronics, software and the great opportunity to create a machine with parts from my 3D-printer. I have worked with this project to and from for several years, but now in recent months the project has had an exciting development, and as I write in the title... Now the magpies work as garbage collectors, payed with food! Ortur Laser Master 15W Black US Plug 15w Laser Engraving Machine Sale, Price & Reviews. New Raspberry Pi 4 Compute Module: So Long SO-DIMM, Hello PCIe! The brand new Raspberry Pi Compute Module 4 (CM4) was just released! 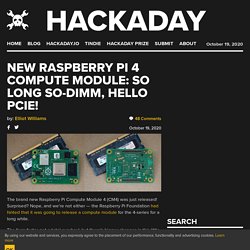 Surprised? Nope, and we’re not either — the Raspberry Pi Foundation had hinted that it was going to release a compute module for the 4-series for a long while. The form factor got a total overhaul, but there’s bigger changes in this little beastie than are visible at first glance, and we’re going to walk you through most of them. The foremost bonuses are the easy implementation of PCIe and NVMe, making it possible to get data in and out of SSDs ridiculously fast. Combined with optional WiFi/Bluetooth and easily designed Gigabit Ethernet, the CM4 is a connectivity monster. Google's Dev Board Mini SBC launches for $100. 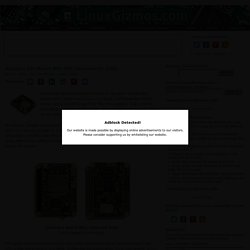 The Mini supplies 2GB LPDDR3, 8GB eMMC, WiFi/BT, micro-HDMI, MIPI-DSI/CSI, 2x Type-C, and 40-pin GPIO. In January, Google announced a stripped down Coral Dev Board Mini version of its Coral Dev Board, as well as a solderable Coral Accelerator Module implementation of Google’s 4-TOPS Edge TPU. Now Seeed has opened $100 pre-orders on the Mini along with a pre-soldered Coral Accelerator Module, with shipments starting at the end of the month. Coral Dev Board Mini, front and back (click images to enlarge) Raspberry Pi NAS Skeleton Case #3DThursday #3DPrinting. DeskPi Pro is a Raspberry Pi 4 case with room for a 2.5 inch drive bay. The Raspberry Pi 4 is a single-board computer with a quad-core ARM Cortex-A72 processor, support for up to 8GB of RAM, and a starting price of $35 (for a model with 2GB of RAM). 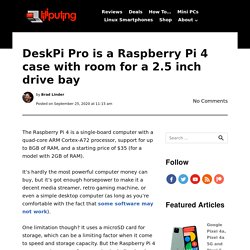 It’s hardly the most powerful computer money can buy, but it’s got enough horsepower to make it a decent media streamer, retro gaming machine, or even a simple desktop computer (as long as you’re comfortable with the fact that some software may not work). One limitation though? It uses a microSD card for storage, which can be a limiting factor when it come to speed and storage capacity. Argon One M.2 Case for Raspberry Pi 4 Adds SATA Support, Full-Sized HDMI Ports. Yesterday, we noted that DeskPi Pro Raspberry Pi 4 case offered an interesting alternative to Argon One enclosure thanks to support for 2.5-inch SATA SSD/HDD, full-sized HDMI ports, and a PWM fan. 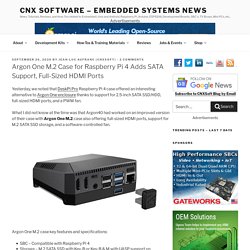 What I did not know at the time was that Argon40 had worked on an improved version of their case with Argon One M.2 case also offering full-sized HDMI ports, support for M.2 SATA SSD storage, and a software-controlled fan. Argon One M.2 case key features and specifications: Once the Raspberry Pi 4 is housed inside the case, you’ll get Gigabit Ethernet, WiFI 5, and Bluetooth 5.0, as well as the two USB 2.0 ports, and two USB 3.0 ports from the SBC.

All ports can be found on the rear panel for more convenient cable management. If you want to enable the M.2 SATA SSD, you’ll lose one of the USB 3.0 ports since the adapter needs to be connected. You can control power & fan settings by software by following instructions in the wiki. Thanks to Simon for the tip. 3D Printer Filament Comparison. LAYWOO-D3, ColorFabb's Woodfill series, and Timberfill are wood-like 3D printer materials that give 3D printed objects the look and feel of fiberboard. 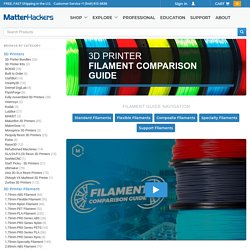 They imbue parts with other wood-like attributes, such as the ability be cut, painted, and sanded. These filaments use PLA as their base, and mix other materials (usually in powder form)into them. The PLA gives the 3D printer compatibility and ease of use while the material contributes to the look, feel, and properties of the filament.

With Woodfill, LAYWOO-D3, and Timberfill, you get the color and texture of real wood with your finished prints, but with Corkfill, you get the added benefit of its light weight. With these organic fills, be cautious of too high of a temperature, as it will result in the wood burning which will give you a darker colored print. Search Thingiverse: An Alternative Search For Thingiverse? « Fabbaloo. A tipster pointed us at a brand new service that can quickly search Thingiverse. 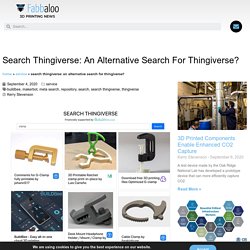 Thingiverse Background Thingiverse was the first online repository dedicated to 3D printable items, founded over a decade ago by MakerBot. Gitpod Open Sources a ‘Holistic IDE’ – The New Stack. Gitpod this week has released an open source version of its integrated developer environment (IDE), which it is calling “a new class of cloud-based IDE that fundamentally changes how software developers build applications.” 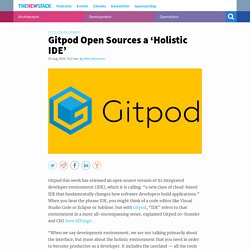 When you hear the phrase IDE, you might think of a code editor like Visual Studio Code or Eclipse or Sublime, but with Gitpod, “IDE” refers to that environment in a more all-encompassing sense, explained Gitpod co-founder and CEO Sven Efftinge. “When we say development environment, we are not talking primarily about the interface, but more about the holistic environment that you need in order to become productive as a developer. It includes the userland — all the tools you need to have. It includes the git repositories, and also everything you do after you check out a certain branch or git repository, that is, generating code, running compilers, downloading dependencies and all these things,” said Efftinge. “The good part is we allow you to script that in code. 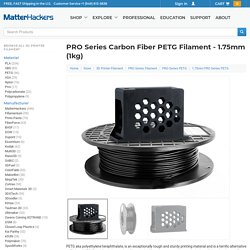 Put simply, MatterHackers is the smart place to shop for all things 3D printing and digital manufacturing. The MatterHackers pros are here to partner with you through every step of your journey turning idea into reality and here are just a few of the perks you’ll receive as a customer: Free, Fast ShippingNo matter how large or small your order is, U.S. customers will always receive free, fast shipping. Off-Grid Cyberdeck! The Raspberry Pi Recovery Kit — BACK7.CO. The concept often feels like something out of a science fiction movie or a doomsday prepper’s handbook- and while this device can work in both scenarios, it’s also about understanding resiliency for your projects and being a good steward of the systems in place today. I’ve been posting the progress of this project on Instagram, Twitter, and Facebook all month, and this is my full build log of the project.

You’ll find the parts list at the bottom of this article. Who needs a case? The 3D Printed Mil-Plastic is here! — BACK7.CO. Finally, a few words about this project and why I built this one. This design took about 7 months to design, including a 3 month break due to life and COVID impacts. I am lucky so far to be able to continue to work on these projects, and it’s been a great relief to “finish” it. Like all of my previous projects here, all of the design files and parts lists are in this article so people can make/modify as they see fit. I would remind fellow makers that it’s licensed under a non-commercial license, so while you can print/modify, doing so commercially is not supported under this project. Want to do that? Going forward though, many of my originals like this one will be for sale in my shop.

Rack ’em Stack ’em Raspberry Pi Controller Board. It isn’t that hard to assemble an array of Raspberry Pi boards and there are several reasons you might want to do so. The real trick is getting power to all of them and cooling all of them without having a mess of wires and keeping them all separated. The ClusterCTRL stack lets you stack up to five Raspberry Pi boards together. The PCB aligns vertically along the side of the stack of Pis with sockets for each pin header. Using a single 12 to 24V supply, it provides power for each board, a USB power connection, and provisions for two fans. There is also a USB port to control the fans and power.

“The first field deployment of WarpSPEE3D was an important milestone for SPEE3D,” said Byron Kennedy, SPEE3D CEO. “While our equipment was initially designed for industrial use, this trial proved that our equipment is actually very robust and can endure harsh conditions and rough handling very well. We look forward to future exercises and continuing to learn how we best serve the Australian Army and defence industry.” 3D printing and the Australian Army. 3D-Printed Tools Make Circuit Sculpture A Little Easier. Prusa Printer Enclosure V2 - with MMU2S support - Prusa Printers.

Beginners Guide To The K40 Laser Engraver - LaserGods.com. If you are considering buying, or have just purchased a K40 Chinese Laser Engraver this Knowledgebase Article is the perfect place for you to start (well, except for maybe the safety article). Sewing made easy: A fashion startup wants to simplify DIY. When Zoey Washington was a teenager, she loved fashion and regularly visited crafts stores and made her own clothes at home. But she’s never forgotten the ultimate hurdle to her creations: clothing patterns, the packets of large sheets of paper used to map out the pieces of a garment.

They were complicated and didn’t reflect her sense of style. Dial In Your Multi-Headed 3D Printer With 2020 Machine Vision. Everything about nozzles with a different diameter - Prusa Printers. The default nozzle diameter for most of today’s printers is 0.4 mm, and E3D’s hotends used in Original Prusa i3 MK3 and MK2/S printers are no different. Autonomous Sentry Turret : 17 Steps (with Pictures) - Instructables. The turret has four modes of operation that autonomously switch states, but it can also be explicitly configured with the remote.