Models and Their Mothers - Slide Show. Forty Portraits in Forty Years. Text by SUSAN MINOT Nicholas Nixon was visiting his wife’s family when, “on a whim,” he said, he asked her and her three sisters if he could take their picture. 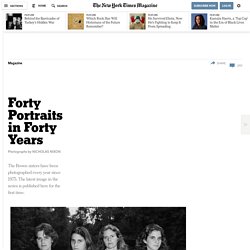 It was summer 1975, and a black-and-white photograph of four young women — elbows casually attenuated, in summer shirts and pants, standing pale and luminous against a velvety background of trees and lawn — was the result. A year later, at the graduation of one of the sisters, while readying a shot of them, he suggested they line up in the same order. After he saw the image, he asked them if they might do it every year. “They seemed O.K. with it,” he said; thus began a project that has spanned almost his whole career. Who are these sisters? Whenever a woman is photographed, the issue of her vanity is inevitably raised, but Nixon has finessed this with his choice of natural light, casual manner and unfussy preparation. Throughout this series, we watch these women age, undergoing life’s most humbling experience. Rephotographing Atget - Photographs and text by Christopher Rauschenberg. Eugene Atget documented Paris from 1888 until his death in 1927. 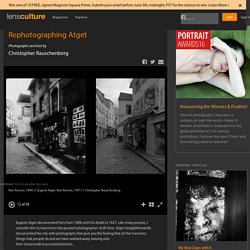 Like many people, I consider him to have been the greatest photographer of all time. Atget straightforwardly documented the city with photographs that give you the feeling that all the transitory things that people do and are have washed away, leaving onlytheir transcendent accomplishments. On a 1989 trip to Paris, I suddenly found myself face to face with a spiral-topped gatepost that I knew very well from a beautiful photograph by Atget (the photograph on the left).

I rephotographed his gatepost from memory (the photograph on the right) and wondered how many other Atget subjects might still be holding their poses. There, among the things and places that Atget had admired, I resolved to return and do a rephotographic exploration to discover if the haunting and beautiful Paris of Atget’s vision still existed.

. — Christopher Rauschenberg. Will Wilson. Peter Glendinning. Understanding Depth of Field in Photography. Depth of field refers to the range of distance that appears acceptably sharp. 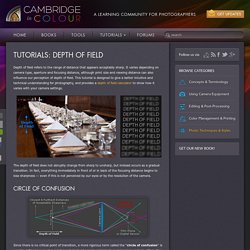 It varies depending on camera type, aperture and focusing distance, although print size and viewing distance can also influence our perception of depth of field. This tutorial is designed to give a better intuitive and technical understanding for photography, and provides a depth of field calculator to show how it varies with your camera settings. The depth of field does not abruptly change from sharp to unsharp, but instead occurs as a gradual transition. In fact, everything immediately in front of or in back of the focusing distance begins to lose sharpness — even if this is not perceived by our eyes or by the resolution of the camera.

Since there is no critical point of transition, a more rigorous term called the "circle of confusion" is used to define how much a point needs to be blurred in order to be perceived as unsharp. Using Wide Angle Lenses. A wide angle lens can be a powerful tool for exaggerating depth and relative size in a photo. 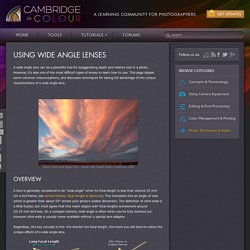 However, it's also one of the most difficult types of lenses to learn how to use. This page dispels some common misconceptions, and discusses techniques for taking full advantage of the unique characteristics of a wide angle lens. 16mm ultra-wide angle lens - sunset near Death Valley, California, USA. Using Telephoto Lenses. You've probably heard that telephoto lenses are for enlarging distant subjects, but they're also a powerful artistic tool for affecting the look of your subject. 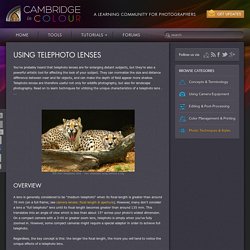 They can normalize the size and distance difference between near and far objects, and can make the depth of field appear more shallow. Telephoto lenses are therefore useful not only for wildlife photography, but also for landscape photography. Read on to learn techniques for utilizing the unique characteristics of a telephoto lens . . . 300 mm telephoto lens - two cheetahs lying behind a log A lens is generally considered to be "medium telephoto" when its focal length is greater than around 70 mm (on a full frame; see camera lenses: focal length & aperture). Regardless, the key concept is this: the longer the focal length, the more you will tend to notice the unique effects of a telephoto lens.

The above diagrams depict the maximum angles that light rays can take when hitting your camera's sensor.