TM Media, a brand of Titan Biotech Ltd. continues to build on the well-established Life Sciences product line we have manufactured and supplied under brand name TM Media since 1992. For over twenty five years, Titan Biotech Ltd. has committed its research and development department as one of the leading producer of reliable and high quality Microbiological & Biotechnological products with an emphasis on service, value and customer satisfaction.

CARBOL FUCHSIN STRONG STAINING SOLUTION : TM MEDIA. Decarboxylase Test Medium Base For Differentiating Salmonellae and Shigellae. Knowing the gram-positive devils of pharma industry. Microbial contamination of pharmaceuticals has been posing severe challenges for the researchers & pharmaceutical manufacturers throughout the generations. 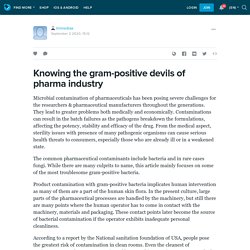 They lead to greater problems both medically and economically. Contaminations can result in the batch failures as the pathogens breakdown the formulations, affecting the potency, stability and efficacy of the drug. From the medical aspect, sterility issues with presence of many pathogenic organisms can cause serious health threats to consumers, especially those who are already ill or in a weakened state. The common pharmaceutical contaminants include bacteria and in rare cases fungi.

While there are many culprits to name, this article mainly focuses on some of the most troublesome gram-positive bacteria. Product contamination with gram-positive bacteria implicates human intervention as many of them are a part of the human skin flora. Endo Agar & More Available at TM Media. Urea Broth for Microbiology. Starch Agar is a solid medium recommended for use in qualitative procedures: TM Media. Dehydrated Culture Media Preparation, Exporter.

TM Media offers an extensive variety of Dehydrated Culture Media, keeping in mind the end goal to create the best outcomes in any microbiological studies. 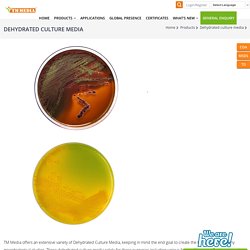 These dehydrated culture media solely for these purposes including various forms of Agar and Broth, with such a wide selection both vegetable and animal origin culture media. All these are broadly used in Microbiology, Research Work, Pharma, Veterinary, Waste Water, Food and Dairy Industries, etc. 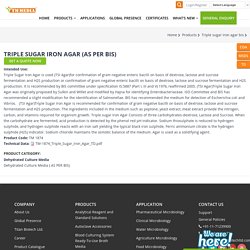 It is recommended by BIS committee under specification IS:5887 (Part I, III and V) 1976, reaffirmed 2005. Brain infusion Broth and Agar Principle and composition and growth response. Brain heart infusion (BHI) is a nutritious growth medium used to culture a variety of fastidious organisms associated with blood culture work and allied pathological investigations. 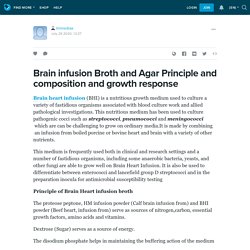 This nutritious medium has been used to culture pathogenic cocci such as streptococci, pneumococci and meningococci which are can be challenging to grow on ordinary media.It is made by combining an infusion from boiled porcine or bovine heart and brain with a variety of other nutrients. This medium is frequently used both in clinical and research settings and a number of fastidious organisms, including some anaerobic bacteria, yeasts, and other fungi are able to grow well on Brain Heart Infusion. It is also be used to differentiate between enterococci and lancefield group D streptococci and in the preparation inocula for antimicrobial susceptibility testing. Types of Microbiology and Biotechnology Products: tmmediaa — LiveJournal. There are several companies in the market that offer a wide array of Microbiology and Biotechnology Products. 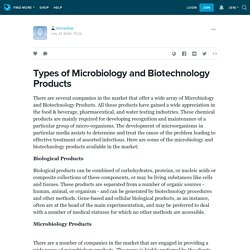 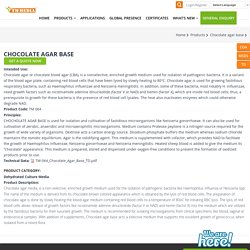 It is a variant of the blood agar plate, containing red blood cells that have been lysed by slowly heating to 80°C. Macconkey Agar Manufacture and Export By TM Media. Blood Agar Base (Infusion Agar) : TM Media. Intended Use: 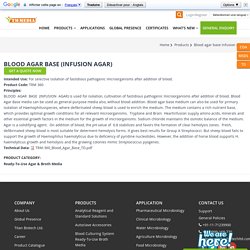 When Coronavirus enters the Human System. Coronavirus have been making people sick for eons. 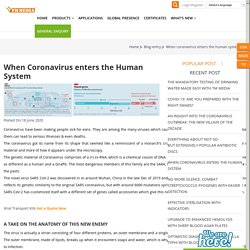 They are among the many viruses which causes common cold. Although most of its members causes mild symptoms, few of them can lead to serious illnesses & even deaths. The coronavirus got its name from its shape that seemed like a reminiscent of a monarch’s crow but were actually it’s spikey proteins. The name signifies less of its genetic material and more of how it appears under the microscopy. Thiosulfate Citrate Bile Salts Sucrose Agar (TCBS Agar) : TM Media. Intended Use: TCBS Agar is used for selective isolation of Vibrio cholerae & other enteropathogenic Vibrios causing food poisoning. 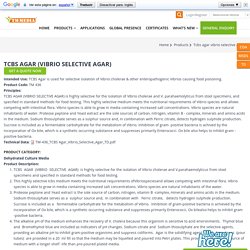 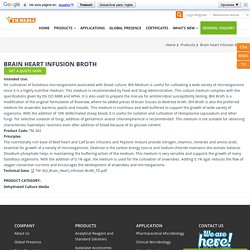 BHI Medium is useful for cultivating a wide variety of microorganisms since it is a highly nutritive medium. This medium is recommended by Food and Drug Administration. This culture medium complies with the specifications given by EN ISO 6888 and APHA. It is also used to prepare the inocula for antimicrobial susceptibility testing. VIRAL TRANSPORT KIT (with Throat Swab / Nylon Flocked Swab) TMVT 002. A Viral Transport kit is intended for the collection and transport of clinical specimens containing viruses, chlamydiae, mycoplasmas or ureaplasmas from the collection site to the testing laboratory. It is ready to use transport swab kit, designed to maintain viral viability and transport viruses in active form for isolation. The peculiar design of the swab ensures optimal elution of the specimen into the transport medium. Transport Medium for Bacterial and Viral Sample. Kligler Iron Agar For Identification Of Gram Negative Enteric Bacilli. Intended Use: Viral Transport Kit For Corona Virus Testing.

Sabouraud Dextrose Agar For Cultivation Of Yeasts. No More Silence. Combat Streptococcus Pyogenes with Easier Detection. With a little ignorance, a strep throat containing bacteria Streptococcus pyogenes or Strep A can develop into a flesh-eating bacterium that can take breaths of lakhs of people around the globe every year majorly from low- & middle-income countries. In the year 2019, an outbreak of Strep A in Essex, England killed 13 people and infected 35.

These numbers have thus created an urgent need for making the mankind more aware about preventing this deadly disease. Strep A is usually spread by being in direct contact with the infected person or indirectly by touching any object with Strep A. They initially infect the humans by causing inflammation of the throat and tonsils and if not treated, can result into scarlet fever, acute rheumatic fever and damaging of the heart valves. TRYPTONE BROTH (Tryptone Water) (VEG.) Description: for detection of indole producing microorganisms. Principles: TRYPTONE BROTH (TRYPTONE WATER) (VEG.) is used for detection of indole producing microorganisms. Tryptone water may also be used for differentiation of other bacteria based on indole production. It consists of Veg. TM Media — The Use of Culture Media in Microbiology.