c3.nrostatic.com/sites/default/files/camarota-employment-nov.pdf. Head fake? Obama never signed amnesty order. Text smaller Text bigger President Obama strides to a podium in the East Room at the White House Nov. 20 to deliver an address to the nation on his immigration actions (Screenshot from White House video). 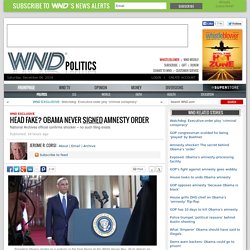 NEW YORK – It’s common knowledge President Obama signed an executive order directing the Department of Homeland Security to forgive millions of illegal aliens for their past violations of immigration law, right? Wrong. Today the National Archives and Records Administration, responsible for maintaining such filings, said no such executive order was ever signed or filed, confirming WND’s report Wednesday.

A National Archives librarian, Jeffrey Hartley, made the confirmation in an email Thursday to WND. “As I indicated, it would appear that there is not an Executive Order stemming from the President’s remarks on November 20 on immigration,” Hartley wrote. Naturalization. The Congress shall have Power To...establish an uniform Rule of Naturalization.... 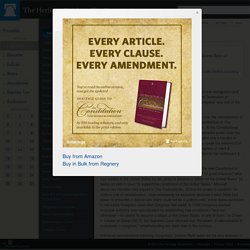 Article I, Section 8, Clause 4 Few powers are more fundamental to sovereignty than the control over immigration and the vesting of citizenship in aliens (naturalization). According to the Declaration of Independence, "obstructing the Laws for the Naturalization of Foreigners" was one of the grievances that led the American colonists to break with Britain. Under the Articles of Confederation, each state retained authority over the naturalization of aliens. This resulted in widely varying state practices, which James Madison in The Federalist No. 42 called a "fault" and "defect" of the Confederation. Congress passed the first "uniform Rule of Naturalization" under the new Constitution in March 1790. Individual naturalizations following Congress's "uniform Rule" were not the only avenues to citizenship for those who were not American citizens by birth.

Although the Supreme Court in MacKenzie v. In Rogers v. Obama Puzzled by Pro-Amnesty Hecklers: 'I Just Took an Action to Change the Law!' President Obama was slightly annoyed after illegal immigration advocates interrupted him during his speech on his executive actions on immigration reform. 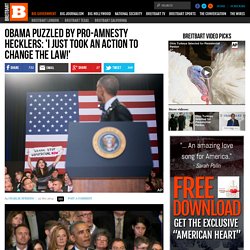 “Don’t just start yelling, young ladies,” Obama said as multiple women stood up to demand that Obama stop deporting people. “I let you holler,” he said as they continued shouting. “You’ve got to listen to me too.” Obama said that the protesters were right about a lot of illegal immigrants getting deported but that he was acting to change it. “What you’re not paying attention to is the fact that I just took an action to change the law,” Obama said. Obama said he understood why protestors yelled at him in the past, but appeared puzzled that he was still puzzled that he was getting interrupted by protestors. “Although I disagree with some of your characterizations, it does not make much sense to yell at me right now, when we are making changes,” he said as supporters cheered and applauded. Obama’s royal flip-flop on using executive action on illegal immigration. U.S. 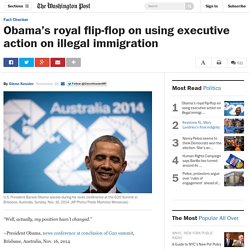 President Barack Obama speaks during his news conference at the G20 Summit in Brisbane, Australia, Sunday, Nov. 16, 2014. (AP Photo/Pablo Martinez Monsivais) “Well, actually, my position hasn’t changed.” –President Obama, news conference at conclusion of G20 summit, Brisbane, Australia, Nov. 16, 2014 Politicians generally hate to say they have changed their minds about something. But as we shall see, the questions actually specifically addressed the sorts of actions that he is contemplating now. There is precedence for such a shift. Univision Town Hall, March 28, 2011: ‘The executive branch’s job is to enforce and implement those laws.’

Parents, young immigrants favored in executive action - Washington Post. Report: All Net Jobs Growth Since 2007 Has Gone to Immigrants. All of the net gains in in jobs since 2007 have gone to immigrants — both legal and illegal — according to a new report from the Center for Immigration Studies, meaning that fewer native-born Americans are working today than were at the end of 2007. 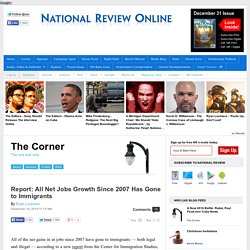 From November 2007 through November 2014, the number of employed native-born Americans has decreased more than 1.45 million, while the number of employed immigrants has risen by more than 2 million (as the immigrant population grew rapidly, too), according to data compiled by the Department of Labor’s Bureau of Labor Statistics. “Native employment has still not returned to pre-recession levels, while immigrant employment already exceeds pre-recession levels,” the report says. “Furthermore, even with recent job growth, the number of natives not in the labor force (neither working nor looking for work) continues to increase.”

Report: Federal Government Issued Nearly 5.5 Million Work Permits to Foreign Nationals Since 2009. More than 5.46 million foreign nationals have received work permits from the federal government since 2009, according to a new report from the Center for Immigration Studies. 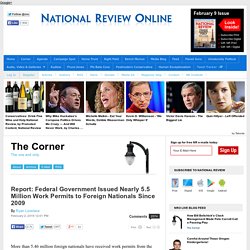 Data uncovered from the U.S. Citizenship and Immigration Services agency reveal that approximately 982,000 work permits were given to illegal immigrants and other foreign nationals unqualified for admission, most of whom crossed the border without inspection. USCIS is the agency within the Department of Homeland Security responsible for issuing work permits and processing applications related to President Obama’s executive action on immigration. On Tuesday, the Senate is scheduled to vote on a bill that funds DHS, while blocking funding that would allow USCIS to implement the president’s executive action.