War on Terror. US 'War on Terror' Remains Poorly Understood. Even as the U.S. expands its military involvement in the Middle East and delays the troop drawdown from Afghanistan, the staggering human toll of the U.S. 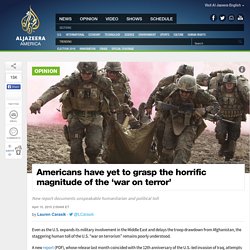 “war on terrorism” remains poorly understood. A new report (PDF), whose release last month coincided with the 12th anniversary of the U.S. -led invasion of Iraq, attempts to draw attention to civilian and combatant casualties in Iraq, Afghanistan and Pakistan. Yet the study, authored by the Nobel Peace Prize laureate International Physicians for the Prevention of Nuclear War and other humanitarian groups, barely elicited a whisper in the media. Washington’s preoccupation with the rise of the Islamic State in Iraq and the Levant (ISIL) and other regional conflicts has largely obscured the humanitarian, economic and political toll of its “war on terrorism.” But ISIL’s resurgence is not unrelated to Washington’s military campaign.

As the authors point out, the report offers a conservative estimate. The Long War Over the “War on Terror” Soon after he took office in 2009, Obama purposefully stopped using one of his predecessor’s favorite catchphrases. 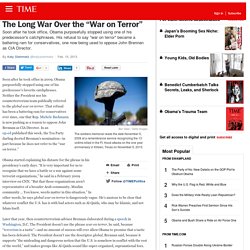 Neither the President nor his counterterrorism team publically referred to the global war on terror. That refusal has been a battering ram for conservatives ever since, one that Rep. Michele Bachmann is now pushing as a reason to oppose John Brennan as CIA Director. In an op-ed published this week, the Tea Party darling decried Brennan’s nomination—in part because he does not refer to the “war on terror.” Obama started explaining his distaste for the phrase in his presidency’s early days. Later that year, then counterterrorism advisor Brennan elaborated during a speech in Washington, D.C. Critics such as Bachmann paint opposition to the phrase as a mistakenly narrow focus on Al-Qaida. Despite the Obama Administration’s public advocacy against the term, news outlets still use the terminology with abandon, too.

Terrorism. Terrorized by 'War on Terror' The "war on terror" has created a culture of fear in America. 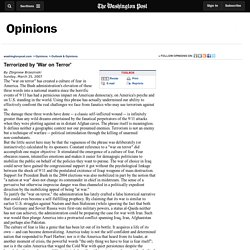 The Bush administration's elevation of these three words into a national mantra since the horrific events of 9/11 has had a pernicious impact on American democracy, on America's psyche and on U.S. standing in the world. Using this phrase has actually undermined our ability to effectively confront the real challenges we face from fanatics who may use terrorism against us. The damage these three words have done -- a classic self-inflicted wound -- is infinitely greater than any wild dreams entertained by the fanatical perpetrators of the 9/11 attacks when they were plotting against us in distant Afghan caves. The phrase itself is meaningless.

It defines neither a geographic context nor our presumed enemies. Iraq Afghanistan And The War On Terror. Since the death of Osama bin Laden, Yemen has become the hottest front in the war against Al Qaeda. 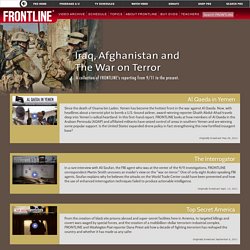 Now, with headlines about a terrorist plot to bomb a U.S. -bound airliner, award-winning reporter Ghaith Abdul-Ahad travels deep into Yemen's radical heartland. In this first-hand report, FRONTLINE looks at how members of Al Qaeda in the Arabian Peninsula (AQAP) and affiliated militants have seized control of areas in southern Yemen and are winning some popular support. Is the United States’ expanded drone policy in fact strengthening this new fortified insurgent base? Originally broadcast May 29, 2012 In a rare interview with Ali Soufan, the FBI agent who was at the center of the 9/11 investigations, FRONTLINE correspondent Martin Smith uncovers an insider's view on the "war on terror. 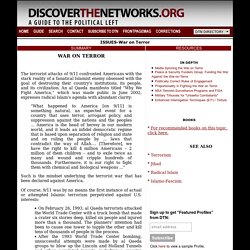 An al Qaeda manifesto titled “Why We Fight America,” which was made public in June 2002, expresses radical Islam’s agenda with abundant clarity: “What happened to America [on 9/11] is something natural, an expected event for a country that uses terror, arrogant policy, and suppression against the nations and the peoples ... America is the head of heresy in our modern world, and it leads an infidel democratic regime that is based upon separation of religion and state and on ruling the people by ... laws that contradict the way of Allah....

[Therefore], we have the right to kill 4 million Americans – 2 million of them children – and to exile twice as many and wound and cripple hundreds of thousands. Furthermore, it is our right to fight them with chemical and biological weapons ...”