Select the Best Adhesive Tapes on the Market. If you are looking for a polyimide film manufacturer, there are a number of options available to you. 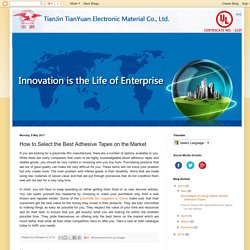 While there are many companies that claim to be highly knowledgeable about adhesive tapes and related goods, you should be very careful in choosing who you buy from. Purchasing products that are not of good quality can make life very difficult for you. These items will not solve your problem but only create more. The main problem with inferior goods is their durability. Items that are made using raw materials of lesser value and that are put through processes that do not condition them well will not last for a very long time. In short, you will have to keep spending on either getting them fixed or on new devices entirely. Tianjin Insulating Materials Factory : The Inspiration behind China’s Rise in Polyimide Manufacturing. 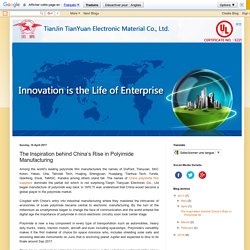 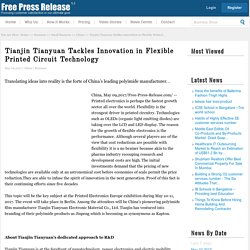 Flexibility is the strongest driver in printed circuitry. Technologies such as OLEDs (organic light emitting diodes) are taking over the LCD and LED display. The reason for the growth of flexible electronics is the performance. Although several players are of the view that cost reductions are possible with flexibility it is a no brainer because akin to the pharma industry recouping research and development costs are high. Research Has Revolutionized Telecommunications on Polymer. The United States of America was the world’s largest producer of polymer products. 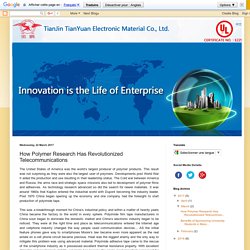 This result was not surprising as they were also the largest user of polymers. Developments post World War II aided the production and use resulting in their leadership status. The Cold war between America and Russia, the arms race and strategic space missions also led to development of polymer films and adhesives. Tianjin Insulating Materials Factory : Benefits of Sponsoring University Students in Mars Projects.

Today interest in the quest to go to Mars is at record high other than global events on Earth. 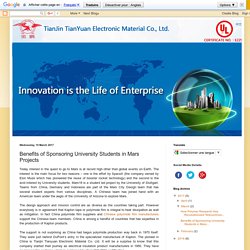 The interest is the main focus for two reasons – one is the effort by SpaceX (the company owned by Elon Musk which has pioneered the reuse of booster rocket technology) and the second is the avid interest by University students. Mars18 is a student led project by the University of Stuttgart. Teams from China, Germany and Indonesia are part of the Mars City Design team that has several student experts from various disciplines. A Chinese team has joined hand with an American team under the aegis of the University of Arizona to explore Mars.

The design approach and mission control are as diverse as the countries taking part. Get Unique Designs of Polyimide Tapes. Posted by gracexiao142 in Business on April 19th, 2017. 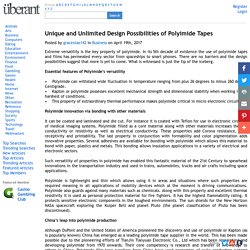 Leading Manufacturer of Kapton Tape in China. The name of a brand that became synonymous with polyimide tapes and films. 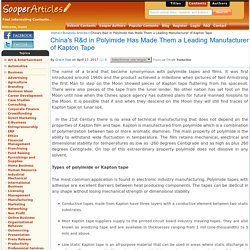 It was first introduced around 1960s and the product achieved a milestone when pictures of Neil Armstrong the first Man to step on the Moon showed pieces of Kapton tape fluttering from his spacesuit. There were also pieces of the tape from the lunar lander. No other nation has set foot on the Moon until now when the Chines space agency has outlined plans for future manned missions to the Moon. How Polyimide is Breaking New Boundaries. Posted by gracexiao142 in Business on March 15th, 2017 Kapton is the brand name of polyimide tape made popular by Dupont. 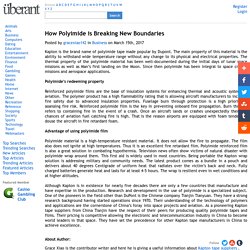 The main property of this material is the ability to withstand wide temperature range without any change to its physical and electrical properties. The thermal property of the polyimide material has been well-documented during the initial days of lunar space missions as well as Man’s first landing on the Moon. Since then polyimide has been integral to space critical missions and aerospace applications. Welcome! Polyimide's Unique Status as a Wonder Engineering Material. Polyimide is a synthesis of an aromatic dianhydride polymer and the aromatic diamine polymer. 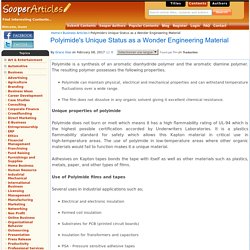 The resulting polymer possesses the following properties. Polyimide can maintain physical, electrical and mechanical properties and can withstand temperature fluctuations over a wide range. The film does not dissolve in any organic solvent giving it excellent chemical resistance. Polyimide's Unique Status as a Wonder Engineering Material. 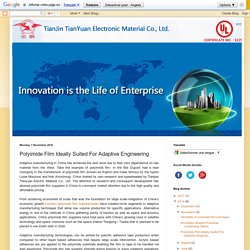 Tianjin Insulating Materials Factory : Polyimide Film Ideally Suited For Adaptive Engineering. Tianjin Insulating Materials Factory : Discipline and Dedication is Hallmark of this Polyimide Manufacturer. It does not matter how slowly you go so long as you do not stop is a world famous aphorism by the greatest philosopher ever born on Earth. His name was Kong Qiu better known as Confucius. Tianjin Tianyuan Electronic Material Co., Ltd. best epitomizes the relevance of this statement even after more than 2000 years (Kong Qiu was born during 551 BC). Polyimide Pioneering Manufacturer from China Continues To Innovate. China, December 30,2016/Free-Press-Release.com/ -- Polyimide production is at the forefront of modern innovation in telecommunication devices, medical electronics automotive and aerospace applications.

Several outstanding mechanical, electrical and thermal properties account for polyimide’s unique contribution. China’s Tianjin Tianyuan company is at the forefront of China’s dominant status in industrial production. Press Release – December 2016, China: Kapton tape consists of polyimide film coated with either acrylic based adhesive or silicon based adhesive. Tianjin Insulating Materials Factory : Innovation Breeds Polyimide Leadership Status. Electronic industry is a fast-paced enterprise that is witness to continuous advancements in the use of innovative materials. Among the most versatile material is polyimide due to its high temperature tapes and films coated with innovative adhesive systems. The key property of polyimide is excellent thermal management. As real estate on printed circuit boards become scarce and smaller by the day thermal management assumes bigger roles to combat the threat of overheating.

Tianjin Insulating Materials Factory : Polyimide Tapes Are China’s Strongpoint in Telecommunication Products. There is no doubt that China is the cornerstone in the production of communication devices. There are an estimated 3 to 4 billion smartphones, more will be required as wearable’s, and IoT (internet of things) gather traction. Their manufacturing capability and economies of scale is unparalleled given the fact almost 85-90% of the world’s communication devices be they cellphones,tablets, communication modems and wearables contain Chinese manufactured components.

This is not surprising as most people concur that the Chinese labor pool are underpaid and hence can produce technology products at alow cost. Polyimide Trends and Tianjian Growing Strength. Posted by gracexiao142 in Business on January 2nd, 2017 Polyimide film's dimensional stability is many times greater than conventional film. In addition, the properties of excellent resistance to varying temperatures of heat along with resistance to chemicals make this product suitable for many industrial applications. Other properties of polyimide are the low linear expansion and low hygroscopic expansion. New trends in polyimide use. 10 Steps to Choosing The Best Polyimide Tapes For Your Situation. Polyimide tape or Kapton tape began its life around 1960s for the aerospace industry. Tianjin Insulating Materials Factory : Versatility of polyimide film and tapes. Polyimide Trends and Tianjian Growing Strength. Polyimide Tapes Are China’s Strongpoint in Telecommunication Products.

There is no doubt that China is the cornerstone in the production of communication devices. There are an estimated 3 to 4 billion smartphones, more will be required as wearable’s, and IoT (internet of things) gather traction. Their manufacturing capability and economies of scale is unparalleled given the fact almost 85-90% of the world’s communication devices be they cellphones,tablets, communication modems and wearables contain Chinese manufactured components. This is not surprising as most people concur that the Chinese labor pool are underpaid and hence can produce technology products at alow cost. This statement has zero veracity. Best Adhesive Polyimide Tape in China. 10 Steps to Choosing the Best Polyimide Tapes for Your Situation. Psas are the Cornerstone of Miniaturization Technology. Pressure sensitive adhesives (PSA) are the most critical factors, which ensure that films and tapes coated with proper adhesives perform as per specification.