Hungry Girl - Tuesday Newsletter. Yes, having Chinese food delivered right to your door is nice... but think of the caloric consequences! 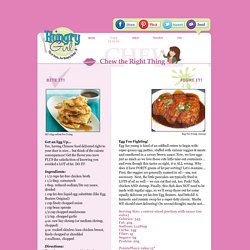 Mix or whisk until cornstarch has dissolved. Reduce heat to low and simmer for about 4 minutes, until liquid thickens. In a large bowl, whisk together egg substitute and remaining 1 tsp. soy sauce until slightly fluffy. Bring a large skillet sprayed with nonstick spray to medium heat. Evan's Kitchen Ramblings. Sweet and Sour Chicken. Update 6/2012: Easily the most popular recipe on my blog, this sweet and sour chicken is a miracle of a dish. 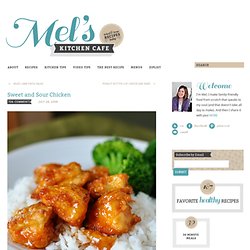 My husband, Brian, requests it for his birthday, Father’s Day and any other day he has the craving (which seriously would be every day if I was willing to make it that often). Invented on a college budget more than ten years ago, it is absolutely divine and remains one of our family favorites. A million percent better than any takeout, the chicken bakes up tender with a beautiful crust and is coated perfectly with the sweet and tangy flavors of the sauce. Over the years, I’ve barely changed the recipe – but thanks to your comments, I have added a few tidbits to help make the whole coating-and-cooking chicken thing a bit less messy. Make this! Sweet and Sour FAQ: Here are a few commonly asked questions about this recipe (so you don’t have to read through all 660+ comments to find the answer you are looking for! Question: The vinegar smell is really overpowering when I bake this. Egg Foo Young Recipe. All About Egg Foo Young by contributing writer Chef Mark R. 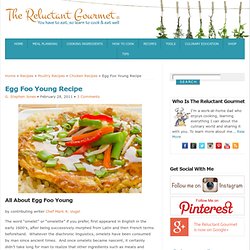 Vogel The word “omelet” or “omelette” if you prefer, first appeared in English in the early 1600′s, after being successively morphed from Latin and then French terms beforehand. Whatever the diachronic linguistics, omelets have been consumed by man since ancient times. And once omelets became nascent, it certainly didn’t take long for man to realize that other ingredients such as meats and vegetables could be added to them. On that note, say hello to egg foo young, which for all intents and purposes is an omelet. Egg foo young is an American Chinese restaurant staple. Exactly who and precisely when egg foo young was created is elusive but it appears to have been extant since the 1940′s. The vegetable options include onion, scallions, carrots, peas, mushrooms, bean sprouts, and cabbage. Variations of the Same If you research various egg foo young recipes you will find a dichotomy exists in the cooking instructions. Ingredients. Chinese Chicken Fried Rice Recipe. 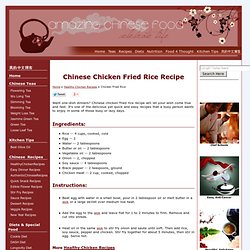 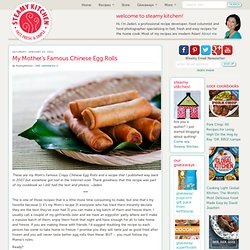 Thank goodness that this recipe was part of my cookbook so I still had the text and photos. ~Jaden This is one of those recipes that is a little more time consuming to make, but one that’s my favorite because 1) it’s my Mom’s recipe 2) everyone who has tried them instantly declare they are the best they’ve ever had 3) you can make a big batch of them and freeze them. Ready? Mama’s Rule #1: Your egg roll filling ingredients must be drained of excess moisture and cooled before rolling. Mama’s Rule #2: Use the right kind of wrapper. Rule#2A. Mama’s Rule #3: Roll small and tight! Mama’s Rule #4: Lay the rolled egg rolls neatly with a piece of parchment, foil or wax paper in between each layer if you are stacking them on top of each other.

Lay the wrapper on a clean, dry surface as shown. MediterrAsian.com - Showcasing the Mediterranean diet and the As.