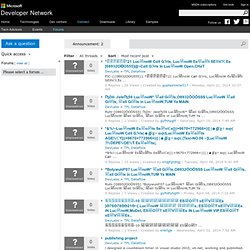 It enables building systems based on dataflow concepts, on in-process message passing, and on asynchronous pipelines. This library, System.Threading.Tasks.Dataflow.dll, is heavily inspired by the Visual C++ Asynchronous Agents Library, by the CCR from Microsoft Robotics, by the Axum language, and more; it’s built on top of a multitude of constructs introduced in .NET 4, internally using types like Task and ConcurrentQueue<T>, in order to provide solutions for buffering and processing data, for building systems that need high-throughput and low-latency processing of data, and for building agent/actor-based systems. 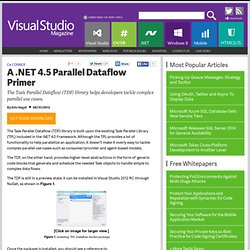 Get Code Download The Task Parallel Dataflow (TDF) library is built upon the existing Task Parallel Library (TPL) included in the .NET 4.0 Framework. Although the TPL provides a lot of functionality to help parallelize an application, it doesn't make it overly easy to tackle complex parallel use cases such as consumer/provider and agent-based models. The TDF, on the other hand, provides higher-level abstractions in the form of generic code blocks that generate and schedule the needed Task objects to handle simple to complex data flows.

The TDF is still in a preview state; it can be installed in Visual Studio 2012 RC through NuGet, as shown in Figure 1. Exploring .NET 4.5 Parallel Dataflow - Part 2. C# Corner. 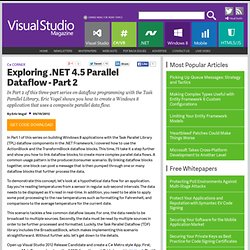 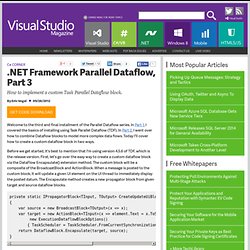 Get Code Download Welcome to the third and final installment of the Parallel Dataflow series. In Part 1, I covered the basics of installing using Task Parallel Dataflow (TDF). Before we get started, it's best to mention that I'm using version 4.5.6 of TDF, which is the release version. Private static IPropagatorBlock<TInput, TOutput> CreateUpdateUiBlock<TInput, TOutput>(TextBlock element) { var source = new BroadcastBlock<TOutput>(x => x); var target = new ActionBlock<TInput>(x => element.Text = x.ToString(), new ExecutionDataflowBlockOptions() { TaskScheduler = TaskScheduler.FromCurrentSynchronizationContext() }); return DataflowBlock.Encapsulate(target, source); } As you can see, the encapsulate method is very handy for creating reusable dataflow blocks that may be used independently or within another dataflow. To get started, create a new class named UiUpdateBlock<T>. 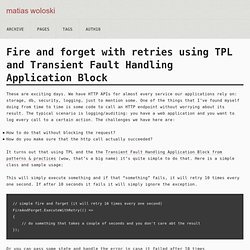 We have HTTP APIs for almost every service our applications rely on: storage, db, security, logging, just to mention some. One of the things that I’ve found myself doing from time to time is some code to call an HTTP endpoint without worrying about its result. The typical scenario is logging/auditing: you have a web application and you want to log every call to a certain action. The challenges we have here are: How to do that without blocking the request?

It turns out that using TPL and the the Transient Fault Handling Application Block from patterns & practices (wow, that’s a big name) it’s quite simple to do that. This will simply execute something and if that “something” fails, it will retry 10 times every one second. // simple fire and forget (it will retry 10 times every one second) FireAndForget.ExecuteWithRetry(() => { // do something that takes a couple of seconds and you don't care abt the result }); .NET Framework 4.0 Task Parallell Library vs. the Concurrency and Coordination Runtime. Introduction I really love Concurrency and Coordination Runtime (CCR) and I have a major product built around CCR. 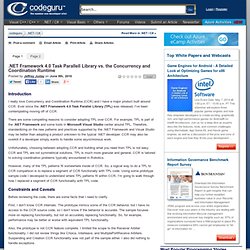 Creating a Neuron ESB Dataflow Block - The Imaginary Road. In my last post, I introduced you to the TPL Dataflow library that was added out-of-band to .NET 4.5. 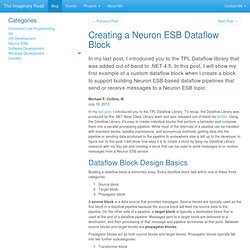 In this post, I will show my first example of a custom dataflow block when I create a block to support building Neuron ESB-based dataflow pipelines that send or receive messages to a Neuron ESB topic. Michael F. Collins, III In my last post, I introduced you to the TPL Dataflow Library. To recap, the Dataflow Library was produced by the .NET Base Class Library team and was released out-of-band via NuGet. Stephen Cleary (the blog): Introduction to Dataflow, Part 1. So far, we've been learning quite a bit about the core async / await support that was added to C# in VS2012. 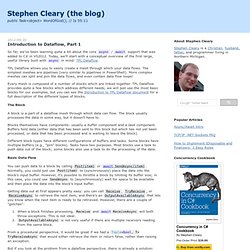 Today, we'll start with a conceptual overview of the first large, useful library built with async in mind: TPL Dataflow. TPL Dataflow allows you to easily create a mesh through which your data flows. The simplest meshes are pipelines (very similar to pipelines in PowerShell). More complex meshes can split and join the data flows, and even contain data flow loops! Every mesh is composed of a number of blocks which are linked together.

The Block. Dataflow (Task Parallel Library) This example demonstrates the case in which an exception goes unhandled in the delegate of an execution dataflow block. 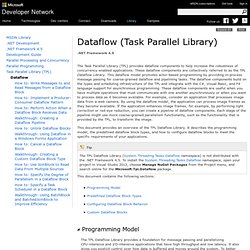 We recommend that you handle exceptions in the bodies of such blocks. However, if you are unable to do so, the block behaves as though it was canceled and does not process incoming messages. Introduction to the TPL Dataflow Framework - The Imaginary Road. The .NET 4.0 Framework introduced the new Task Parallel Framework which has made background and parallel processing extremely easy for .NET developers. 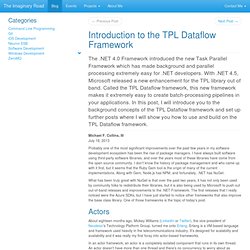 This post is a complete walkthrough of a web crawler sample that was build purely by using Tpl Dataflow. it was built on .NET 4.5 / C# 5 (on a virtual machine using VS 11). I will analyze each part of this sample, both by discussing the Dataflow blocks and the patterns in used. the sample code is available in here (it is a VS 11 project). during the walkthrough you will see the following Tpl Dataflow blocks: TransformBlock TransformManyBlock ActionBlock BroadcastBlock you will see how the aysnc / await signature of the Dataflow blocks is better for executing an IO bound operation (without freezing a worker ThreadPool thread).

This blog post is coming a couple of weeks late due to my copy of Windows becoming corrupted – and strangely the only things I didn’t have backed up were this Oscilloscope app! Anyway, last time I took a look at charting performance, but this post will investigate TPL Dataflow. In my original F# post, I discussed that I felt that the code would have been better implemented in RX, which I then went and did in this post. However, RX isn’t the only recent new technology coming out of Microsoft that deals with streams of data. TPL Dataflow has a confusingly similar overlap with the usages of RX, and this is what its whitepaper has to say: “Astute readers may notice some similarities between TPL Dataflow and Reactive Extensions (Rx), currently available as a download from the MSDN Data developer center. That does sound very interesting – who doesn’t want better performance! Implementation I’ll dive in straight away and look at some code.

Oscilloscope/Buffered View Sliding Window View Performance. TPL DataFlow Debugger Visualizer - Home. MEF and TPL Dataflow NuGet Packages for .NET Framework 4.5 - BCL Team Blog. Last week we released .NET Framework 4.5. Today we are happy to announce the release of the RTM versions of the MEF and TPL Dataflow NuGet packages, as promised. Our pre-release versions were already in an excellent shape so we didn’t have to change much. In fact, there are no surface area changes and no behavioral changes. We updated a few strings to align with some branding changes (in case you didn’t notice: “Metro style apps” are now called “Windows Store apps”).

Okay, let’s just get this out of the way: Asynchronous (multi-threaded) programming is not easy. This warning really has nothing to do with .NET in particular, because it can be quite challenging to do correctly on any framework, but here’s the good news: