Travel. 5 Adventure Experiences that Only Africa Can Give You. The roar of leopards and lions, roaming elephants, culture-rich villages and tribes, the serene endless plains-Did someone mention Africa? 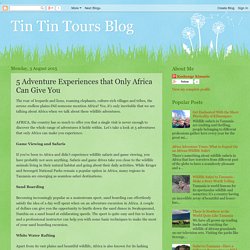 Yes, it’s only inevitable that we are talking about Africa when we talk about these wildlife adventures. AFRICA, the country has so much to offer you that a single visit is never enough to discover the whole range of adventures it holds within. How to land a perfect Family Wildlife Safari. If you are up for some fun and adventure in the vast wilderness with a herd of animals, nothing can better satisfy your adventure-lust than a family safari. 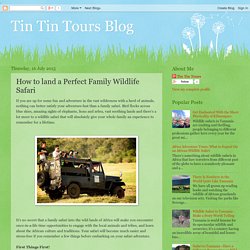 Bird flocks across blue skies, amazing sights of elephants, lions and zebra, vast soothing lands and there’s a lot more to a wildlife safari that will absolutely give your whole family an experience to remember for a lifetime. Africa Adventure Tours: What to Expect On an African Wildlife Safari. There’s something about wildlife safaris in Africa that lure travelers from different part of the globe to have a seamlessly pleasant and adventurous experience. 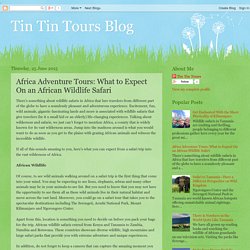 Excitement, fun, wild animals, gigantic fascinating lands and more is associated with wildlife safaris that give travelers (be it a small kid or an elderly) life-changing experiences. Talking about wilderness and safaris, we just can’t forget to mention Africa, a county that is widely known for its vast wilderness areas. Jump into the madness around is what you would want to do as soon as you get to the plains with grazing African animals and witness the incredible wildlife. Safari to Tanzania—Have a Different Perspective on Wild Kingdom. Ngorongoro Crater and the Serengeti National Park in Tanzania are world known African hotspots offering unmatchable animal sightings. 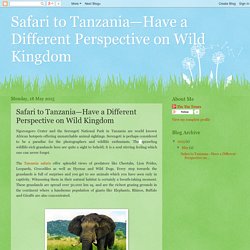 Serengeti is perhaps considered to be a paradise for the photographers and wildlife enthusiasts. The sprawling wildlife-rich grasslands here are quite a sight to behold; it is a soul stirring feeling which one can never forget. The Tanzania safaris offer splendid views of predators like Cheetahs, Lion Prides, Leopards, Crocodiles as well as Hyenas and Wild Dogs. Every step towards the grasslands is full of surprises and you get to see animals which you have seen only in captivity.

Witnessing them in their natural habitat is certainly a breath-taking moment. The most highlighted event in Serengeti is the Great Migration of more than 2 million Wildebeest, 200,000 Zebra and 350,000 Thompson Gazelle in search of green grass and water resources. Apart from safaris, you can enjoy other activities such as night drives and guided nature walks too. Tourism Companies in Tanzania. Handy Information about Safaris in Tanzania.

Tall mountains, Giant animals and few of the Greatest Game Reserves in the world, Tanzania has it all and that’s how it got its name “The Land of Superlatives”. 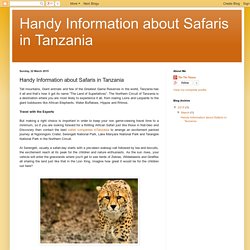 The Northern Circuit of Tanzania is a destination where you are most likely to experience it all, from roaring Lions and Leopards to the giant bulldozers like African Elephants, Water Buffaloes, Hippos and Rhinos. Travel with the Experts But making a right choice is important in order to keep your non game-viewing travel time to a minimum, so if you are looking forward for a thrilling African Safari just like those in Nat-Geo and Discovery then contact the best safari companies inTanzania to arrange an excitement packed journey at Ngorongoro Crater, Serengeti National Park, Lake Manyara National Park and Tarangire National Park in the Northern Circuit. Tanzania Safaris With Tintintours. Visit Tanzania - Africa Travel Channel. Www.africareport.com video - Natureripe, Tanzania. Business Television - Online Corporate Video Reports. 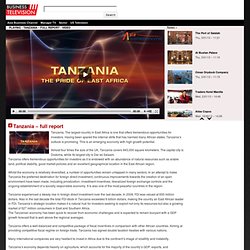 The largest country in East Africa is one that offers tremendous opportunities for investors. Having been spared the internal strife that has harmed many African states, Tanzania’s outlook is promising. This is an emerging economy with high growth potential. Almost four times the size of the UK, Tanzania covers 943,000 square kilometers. The capital city is Dodoma, while its largest city is Dar es Salaam. Whilst the economy is relatively diversified, a number of opportunities remain untapped in many sectors. Tanzania experienced a steady rise in foreign direct investment over the last decade. Tanzania offers a well-balanced and competitive package of fiscal incentives in comparison with other African countries. Many international companies are very hesitant to invest in Africa due to the continent’s image of volatility and instability. Tanzania’s economy depends heavily on agriculture, which accounts for the majority of the country’s GDP, exports, and employment. 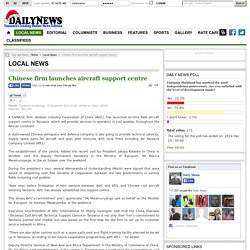 A state-owned Chinese aerospace and defence company is also going to provide technical services, supply spare parts for aircraft and plan joint ventures with local firms including Air Tanzania Company Limited (ATCL). The establishment of the centre, follows the recent visit by President Jakaya Kikwete to China in October, said the Deputy Permanent Secretary in the Ministry of Transport, Ms Monica Mwamunyange, in Dar es Salaam over the weekend. During the president’s tour, several Memoranda of Understanding (MoUs) were signed that were aimed at deepening over five decades of cooperation between the two governments in various fields including civil aviation.

Seltene Erkrankungen - Startseite. Dr. Schnutenhaus. Family Fun On Safari with TINTINTOURS. Day 1: Arrival You will be met at the International Airport of Kilimanjaro by your driver/guide. 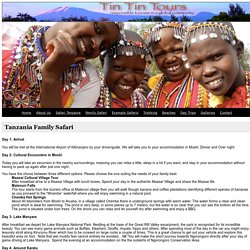 Safaris to Tanzania offer you the northern parks of Tanzania, amongst the most famous in the world. Tin Tin Tours can bring you to the home of the most dense concentration of wildlife of its kind in the world, destinations such as Ngorongoro and the Serengeti have unparalleled reputations for game viewing. – tintintours