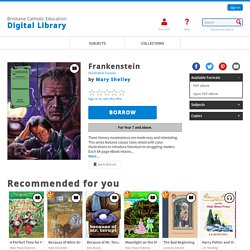 Learn More. OverDrive would like to use cookies to store information on your computer to improve your experience at our website. One of the cookies we use is critical for certain aspects of the site to operate and has already been stored. You may remove and block all cookies from this site, but this could affect certain features or services of the site. To find out more about the cookies we use and how to remove them, please see our Privacy Policy. If you do not wish to continue using this site, please click here. Main Nav Main Content Borrow For Year 7 and above. These literary masterpieces are made easy and interesting. Available Formats- PDF eBook Open PDF eBook Copies+ <li class="details-patrons-on-holds"><div class="row"><div class="twelve mobile-four columns">0 people waiting per copy</div></div></li> Due to publisher restrictions, your digital library cannot purchase additional copies of this title. 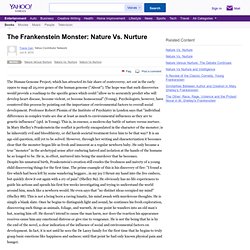 The hope was that such discoveries would provide a roadmap to the specific genes which could "allow us to accurately predict who will develop heart disease, become violent, or become homosexual" (Young). Psychologists, however, have countered this process by pointing out the importance of environmental factors to overall social development. Professor Robert Plomin of the Institute of Psychiatry in London says that "individual differences in complex traits are due at least as much to environmental influences as they are to genetic influences" (qtd. in Young). ENGLISH - Literature. Keats. 20 Ways to Use Comics In Your Classroom. Bringing Horror to the Classroom with 'Fear and Learning' Even though the horror genre is often relegated as a “low” form of artistic endeavor, nobody can deny that it has produced some of the most popular and profitable books and films. 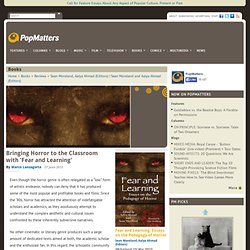 Since the ‘80s, horror has attracted the attention of indefatigable scholars and academics, as they assiduously attempt to understand the complex aesthetic and cultural issues confronted by these inherently subversive narratives. No other cinematic or literary genre produces such a large amount of dedicated texts aimed at both, the academic scholar and the enthusiast fan. In this regard, the scholastic community has dissected the horror genre to better understand how the many philosophical, cultural, racial, gender, sexual, social, economical, and political complexities that trouble our daily world are portrayed, subverted, and criticized in a variety of macabre films and novels. 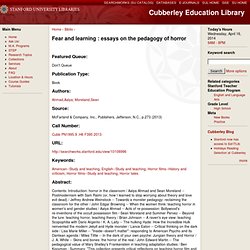 Get Lesson Plans - Teacher Grants - Teaching Resources and More. 25 Questions that Provoke Thought. I’m going to answer your questions because no one else did. 1. 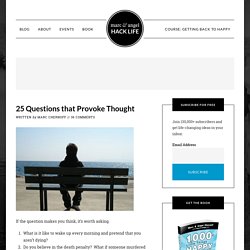 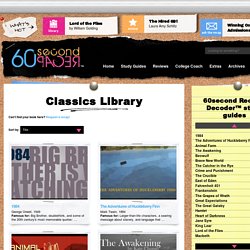 Request a recap! Sort by: Title George Orwell, 1949Famous for: Big Brother, doublethink, and some of the 20th century's most memorable quotes: … The Adventures of Huckleberry Finn Mark Twain, 1884Famous for: Larger-than-life characters, a searing message about slavery, and language that … Animal Farm George Orwell, 1946Famous for: Fighting pigs,"All animals are equal, but some animals are more equal than other… 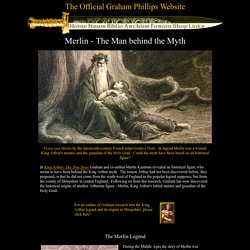 In legend Merlin was not only depicted as a wizard but also a bard - a poet and writer of songs. In the Dark Ages bards were accredited with the gift of prophecy. The Bodleian Library, Oxford, where The Red Book of Hergest is now preserved. Ambrosius Aurelius does have many things in common with the Merlin of later romance. Like Merlin, he united Britain in the period after Vortigern's reign: both Gildas and Bede say that he successfully halted the invasion of Britain in the last few decades of the fifth century.

Surviving writings concerning Britain in the Dark Ages are found mainly in Welsh manuscripts and in the Welsh language. Read and Listen Along and Aloud Resources. British and American Literature.