Lionel Logue - Wikipedia. Lionel George Logue, CVO (26 February 1880 – 12 April 1953) was an Australian speech and language therapist and amateur stage actor who successfully treated, among others, King George VI, who had a pronounced stammer. 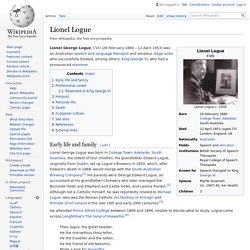 Early life and family[edit] Lionel George Logue was born in College Town, Adelaide, South Australia, the oldest of four children. His grandfather Edward Logue, originally from Dublin, set up Logue's Brewery in 1850, which, after Edward's death in 1868, would merge with the South Australian Brewing Company.[1] His parents were George Edward Logue, an accountant at his grandfather's brewery who later managed the Burnside Hotel and Elephant and Castle Hotel, and Lavinia Rankin.[2] Although not a Catholic himself, he was reportedly related to Michael Logue, who was the Roman Catholic Archbishop of Armagh and Primate of All Ireland in the late 19th and early 20th centuries.[3] Lionel Logue: Pioneer speech therapist 1880-1953. Lionel Logue: Pioneer speech therapist 1880-1953 Details Created: Wednesday, 16 November 2011 17:52. 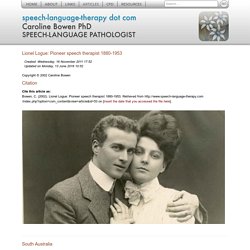 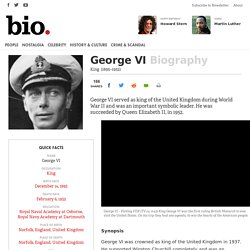 He was succeeded by Queen Elizabeth II, in 1952. Synopsis George VI was crowned as king of the United Kingdom in 1937. He supported Winston Churchill completely and was an important symbolic leader for the British people during World War II, even visiting armies on the battle fronts. He was succeeded by his daughter, Queen Elizabeth II, after he died of lung cancer in 1952.